Love in The RV Park by Jeffrey Ross - Spotlight and Giveaway 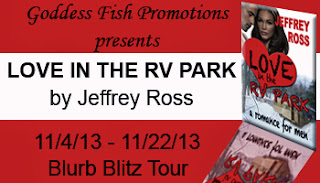 This post is part of a virtual book tour organized by Goddess Fish Promotions. Jeffrey will be awarding a $25 BN GC to a randomly drawn commenter during the tour. Click on the tour banner to see the other stops on the tour.

Tennessee Williams knew distinctly
—No shadows dance upon the Sun
And now you know it, too
But the sun shines anyway...

Yes, the pair lives together in an older single wide
A two-room palace smelling like ash trays, old coffee, and ecumenical paint.
He might have looked like Elvis (the 50’s Elvis) three decades ago…
She is still a beauty, hardened some. Though her tattoos have lost that etched
and sexy look, she still turns heads... and has a poignant “way” any male or
female might recognize.

Yes, they still cut impressive figures together—but anachronistic—
Sometime, long ago, they left Public lives together
and rode a bus to Hamilton City, and thought they’d stay a day or two—walking
hand-in-hand through the diesel fumes, neither excited nor dismayed. some time went by—
Then they waited to see if spouses were angry or perplexed—
They never heard a thing from the Old World—now, in late middle age,
Still they live and love in a rent-by-the-week mobile home,
Bathed in eerie and accusing pink light each winter morning—
Haunted by frosty windows in the dark sky December…
They wander to the Blue Caboose Diner for most meals
Coupling down cracked and slippery concrete sidewalks
Without cares but with many cares...

He listens to the world on an old AM transistor radio
She reads newspapers someone left behind—
and paints her nails and adjusts toe rings each morning …
He shaves a weathered face carefully, with a blade and mug of manly lather—
The modern age, the spiritus mundi, well that means nothing to this dyad. They have each other...

Sure, they live and love in a rented mobile
They love with the freshness of just-cut Timothy Hay, of Morning Glories, and the late April Rain… 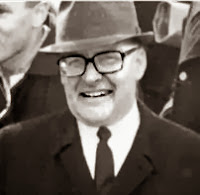 Buy the book at Rogue Phoenix Press, Amazon, Barnes and Noble, or Smashwords.
Posted by MJ Thomas at 4:00 AM