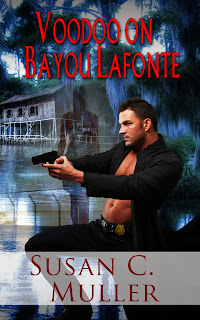 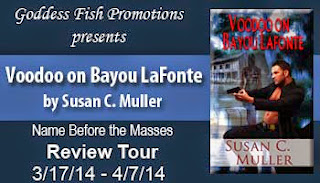 This review is done in conjunction with a virtual book tour organized by Goddess Fish Promotions. Susan will be awarding a $20 Amazon gift card to a randomly drawn commenter during the tour. Click on the tour banner to see the other stops on the tour.

A frantic phone call leads Detective Remy Steinberg racing through the night toward the one place he vowed never to return. With the life of his kidnapped daughter at stake, he willingly faces shotgun-wielding drug dealers, corrupt law-enforcement officials, and a raging hurricane.

Scouring the seedy back alleys of New Orleans for information, he goes undercover at a sinister voodoo ceremony, and struggles to understand the forces of black magic that hold his daughter hostage.

With time ticking down, he battles for his life against a high voodoo priest, but can he face the two things he fears most: the swamp that terrorized his childhood, and the ex-wife he’s never stopped loving?

Voodoo on Bayou Lafonte is Ms. Muller's third book in her Occult series, but it can certainly be read as a standalone. I'm looking forward to picking up the first two books of the series to read more about the other characters I've met in this book.

This was an exciting book... from page one to the last page of the book, the author kept the action going--and my heart was in my throat during the hurricane. Even knowing this was a romantic suspense, the author kept me on tenterhooks until the final resolution--I was THAT involved in the book and with the characters.

Remy and Gabby both had a lot of growing up to do...and it was wonderful to see them both see each other with adult eyes and to be able to appreciate the others' positive qualities.

I hope this isn't the end of the series. I really like these characters and would like to see them in other books and other situations.

Remy gritted his teeth and turned off his flashing light bar as he crossed the state line. His badge might carry some weight in Texas, but not in Louisiana. Those guys resented against everything from Texas except the money that rolled in.

Well, too bad. He felt the same about their whole state. Had since the day his mother dragged the family there from New Jersey.

He understood, forgave her even. When his father died, she needed some place that felt like home. Only it never felt like home to him. In fact, it felt more like purgatory. And he got out of there as fast as he could.

Unfortunately, that meant dragging Gabrielle and Adrienne to Texas with him. And Gabby had refused to do that. She’d given him an ultimatum. Come back or get a divorce. Well, he’d never much liked ultimatums. And he sure didn’t plan to ever live in that state again.

He’d gone to Texas in search of work, sure that if Gabby loved him enough, she’d follow. Only she hadn’t, and he’d refused to give up a good job and return to a hand-to-mouth existence, sponging off of family, and feeling like a failure because he couldn’t support his new baby and his wife.

The same wife who hadn’t loved him enough to come with him.

His hands tightened on the wheel until his fingers went numb. Would things have been different if he hadn’t been so bullheaded? Was Adrienne paying the price for his stubbornness?

He could beat himself up later for rash decisions. All that mattered now was his daughter’s safety.

And every minute that passed, the knot in his gut grew.

He stopped for gas, a quick burger, and to study the map. Nothing had changed. A few more fast-food joints, a few more casinos. But the swamp was still only feet off the road in places.

Another hour of driving, and he turned off the interstate, into bayou country. The lights fell away and he was left with only his headlights poking a hole in the darkness. Even the air felt heavy, like the weight on his shoulders.

How he hated this place. And now it had taken his daughter.

Susan C. Muller is a fourth generation Texan. She attended Stephen F. Austin State University where she majored in Business Administration. She started her first novel at age eleven, but it wasn’t until after she had worked many years and raised a family that she returned to her first love, writing. She is a member of Northwest Houston RWA, Kiss of Death online RWA, and The Houston Writers Guild. Her novel, The Secrets on Forest Bend, has won several awards.

Susan and her husband, Sid, live in Spring, Texas with their rescue dog, Buster, a 120 pound black lab of advanced age. They have two children and four grandchildren. They love to travel and have been fortunate to see much of the world. Her favorite places include Kenya, New Zealand, and the Galapagos Islands. When not writing, she can be found doing volunteer work at a local hospital. She loves to read, travel, snorkel and take long walks.

Buy the book on Amazon.
Posted by MJ Thomas at 4:00 AM