The Vanishing Wife by Barry Finlay - Interview and Giveaway

This post is part of a virtual book tour organized by Goddess Fisih Promotions. Barry will be awarding a medium or large t-shirt with the author's "Keep On Climbing" logo on the front to a randomly drawn winner via rafflecopter during the tour (US/CANADA ONLY). Click on the tour banner to see the other stops on the tour.

Thanks for agreeing to stop by It's Raining Books, Barry, and answering a few questions. Why do you write in your genre? What draws you to it?

I have actually written in different genres. My first book, Kilimanjaro and Beyond is a true-life inspirational story about my climb of Mount Kilimanjaro at age 60 with my son and my subsequent efforts to help the children of Tanzania. My second book is a humorous travel memoir called, I Guess We Missed the Boat. Now, I’ve written a suspense book called The Vanishing Wife.

I suppose I’m drawn by whatever moves me at the time. I really enjoyed writing what I lived in my first two books. I wanted to challenge myself with The Vanishing Wife to see if I could write fiction. The story was inspired by something that had been rolling around in my head for some time. Whenever a news item pops up about someone disappearing, I always think how awful it must be for those waiting to find out what has happened to their loved one. The Vanishing Wife is based on that with some very dangerous people thrown in. I’m very pleased with the result.

I really wanted to make sure the main character reacted the way the average person does and for that, I tried to put myself in his shoes. But I also wanted to make sure the description of the investigative techniques was accurate. I am very fortunate to have a good friend who had a contract with the police force in my home city. He introduced me to three detectives who were very forthcoming about their world. I interviewed all three and they all offered to provide any information I needed. The meetings were fantastic and I came away from them not only wiser and full of ideas for the book, but also feeling that we are in good hands.

The book also switches venues from Gulfport, Florida, to Ottawa, Canada. I have spent time in Gulfport and live in Ottawa so I believe the descriptions of the two locations to be accurate. I think it adds credibility to be able to write about the venue based on some personal knowledge.

Never give up. No matter how dire the circumstances, there is still hope until we learn otherwise. I learned that same lesson by climbing a mountain, by the way. That gave rise to my logo, “Every mountain top is within reach if you just keep on climbing.” It applies to all the mountains we run into in life, whether they are large pieces of volcanic rock or personal situations.

I don’t think I have any quirks or superstitions, but my habit is to write at 6 o’clock in the morning. I have always been a morning person. That seems to be when I’m most productive.

I’m a little of both. Mostly, I have the storyline in my head and I will write down characteristics of the characters and basic ideas. I like to think that qualifies as plotting. But I also go where the story takes me. I was surprised when I was writing The Vanishing Wife that the story took unexpected twists and turns as it developed. So, I guess that makes me a pantser too.

Well, there is the omnipresent coffee cup and my mouse on the mouse pad, some pens lying haphazardly on the desk and more in a container where they are supposed to be, a notepad, a desk calendar lying on its side where it is of no use, a memory stick and assorted random scraps of paper with notes that should be on the notepad. Good thing you didn’t ask me about the left side. It’s really messy!

I’m always thinking of possible storylines but I just finished The Vanishing Wife so I’m preoccupied with trying to get the word out about it. Any authors out there will know how much time that takes. I’ve done 4 book signings since it came out in November and have three more lined up for January. That doesn’t leave a lot of time for writing. But, in the meantime, some storylines are percolating.

I actually have two, if I may:

• As a reader, what draws you into a mystery?
• Is there a particular storyline that would really appeal to you? 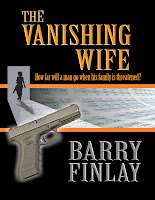 How far will a man go when his family is threatened? Mason Seaforth is about to find out. He is a mild mannered accountant living a quiet, idyllic life in the quiet community of Gulfport, Florida with his wife, Samantha. At least, it’s quiet and idyllic until Sami, as she’s known to her friends, vanishes the night of their 20th anniversary.

Mason is thrown into a life that is meant for other people as he and their brash friend, Marcie Kane, try everything to find out what has happened to Sami. A search of Sami’s computer uncovers notes describing a past that Sami has buried for more than 20 years. Then come the threatening phone calls: to Sami, to their daughter Jennifer at university in Miami, and to Mason.

Mason and Marcie are thrust into a race against a sadistic killer to discover what has happened to Mason’s wife. He reluctantly exchanges his spreadsheets for a Glock 17 and he and Marcie follow a trail left behind by Sami which leads them to a potential confrontation with some very dangerous men in Canada. Mason is required to make decisions that he could never imagine himself making and each one has deadlier consequences than the last. The wrong one could result in the death of his entire family.

Sami never went anywhere without her cell phone, and if she had gone out for a walk, she would certainly have taken the phone with her. He reached for his own phone and dialed Sami’s number. The number rang. And rang, and rang again. Mason held his breath. “Please, Sami, please, pick up,” he whispered. On the sixth ring, he heard Sami’s confident voice message. “You have reached Samantha Seaforth. Please leave a message, and I will call you back.”

In a shaking voice, Mason heard himself doing as she asked. “Sweetie, it’s Mason, I’m leaving a message. Where are you? Please call me back right away.”

It had been two hours since he first noticed Sami was gone.

In 2009, Barry Finlay went up a mountain as an accountant and came down as a philanthropist. After over thirty years in various financial roles with the Canadian federal government, he took his life in a different direction and climbed Africa’s Mount Kilimanjaro at age sixty with his son Chris. The climb and their fundraising efforts to help kids in Tanzania led to the award-winning book,Kilimanjaro and Beyond: A Life-Changing Journey. He followed that up with the hilarious travel memoir, I Guess We Missed The Boat, which was named Best Travel Book of 2013 by Reader Views. Now, he has completed his debut fiction book, The Vanishing Wife. Barry was named to the Authors Show’s list of “50 Great Writers You Should Be Reading” in 2012. In 2013, he received the Queen Elizabeth Diamond Jubilee medal for his philanthropic work in Africa. He lives in Ottawa, Canada with his wife Evelyn.