This post is part of a virtual book tour organized by Goddess Fish Promotions. The author will be awarding a $40 Amazon or B/N GC to a randomly drawn winner via rafflecopter during the tour. Click on the tour banner to see the other stops on the tour.

The greatest superpower, how to turn can’ts into cans, is wielded by the tenacious M. Pax. She seeks out self doubters everywhere, putting the whammy on their insecurities. “You can’t triumph if you give up.” Will her petition to the League of Justice be accepted? Stay tuned...

The theme of the book is the tagline, ‘Salvation comes at a price.’ There are three other storylines happening in the novel besides the main character’s. Lepsi and Talos are off searching for alien allies to thwart the coming war. Lepsi ends up making a grave sacrifice to save his friends. Rainly faces a past she wants to erase. She also has to make a terrific sacrifice for the good of all. The third is on the main character’s homeworld of Pardeep Station. The resident recluse has to run the planet, manage a changing galaxy, and learn to face the world again.

This book became quite the challenge. In the middle of it, I received one of those dreaded phone calls. My baby brother was found dead, and I dropped everything to return to Western New York and be with my family. I had lots of loss and sorrow to draw on when finishing this novel.

The good-bye scenes for the character making horrendous sacrifices. I used them to say the good-bye to my brother I didn’t get.

Most of my characters have had pretty tragic pasts and face unpleasant challenges. I would probably pick the mercenary, Captain Kaesare. She’s a secondary character with a mouth, a quick trigger finger, and a cool spaceship. I’d love to travel from planet to planet and explore the galaxy. It’s the reason why I write the Backworlds series.

In the far future, humanity settles the stars, bioengineering its descendants to survive in a harsh universe. This is the sixth book in the science fiction series, The Backworlds. A space opera adventure.

The Backworlds hang by a Quantum string, a thread about to snap. Annihilation is coming if Craze can’t stop it.

The genocidal alien he had trapped breaks free, destroying a ship belonging to the Backworlds’ oldest enemy, the Fo’wo’s. The murderous alien wants to overtake the galaxy. The Fo’wo’s want another war.

The Backworlds’ best chance to survive is to overcome a century of hate and forge an alliance with the Fo’wo’s. Because of his history with the alien, Craze is recruited to represent his people. Now he’s the most hated man in the galaxy.

The looming war will be a holocaust unless he can stop it, knowing salvation comes at a price.

Boing Boing gives The Backworlds 5 stars! "This is a fun, fast paced novel that reminded me a bit of early Heinlein".

Commander Hunninger tapped an icon on her tab and jabbed it in Craze’s face. “You really want to say no to this?”

The screen was too close. He grabbed the device from her manly fingers and brought the image into focus. A brand new, state-of-the-art, mini city docking facility. Pardeep Station had never seen finer and probably never would. Better protection from the dust storms was a necessity, and folks had to get out of the cold. Craze tired of the stench of the sick. “How much is it goin’ to cost? Everyone on this moon barely has three chips to jangle in their holey pockets.”

“No chips.” She smiled. Her wide mouth contained a lot of very white teeth.

Three good sucks on his air hose and Craze knew he wasn’t dreaming. He narrowed his eyes. “There’s still a price.” 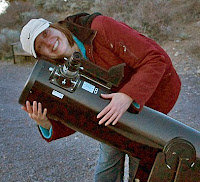 M. Pax is author of the space adventure series The Backworlds and the contemporary science fiction series The Rifters, plus other novels and short stories. Fantasy, science fiction, and the weird beckons to her, and she blames Oregon, a source of endless inspiration. She docents at Pine Mountain Observatory in the summers as a star guide, has a cat with a crush on Mr. Spock, and is slightly obsessed with Jane Austen. Learn more at:

a Rafflecopter giveaway
Posted by MJ Thomas at 2:00 AM