This post is part of a virtual book tour organized by Goddess Fish Promotions. Donna Del Oro will be awarding a print copy of The Delphi Bloodline, Born to Sing, Scheming, or Dreaming in Los Angeles to a randomly drawn winner via rafflecopter during the tour. Click on the tour banner to see the other stops on the tour.


Behind ATHENA’S SECRETS and THE DELPHI BLOODLINE series: Exploring Your Own Psychic Abilities
By Donna Del Oro


Most of us have intuitive insights into situations and people. We get “gut reactions”, “vibes” or “feelings”. Often, we’re gratified, even surprised, when our gut reactions prove correct, and we spend a few minutes wondering why our guts are smarter than some people’s minds. Or why our guts can’t help us out more often. Like, which slot machine should I play? Which stocks should I buy? Is this man all he claims to be?

Clairvoyance is a skill that my heroine, Athena Butler, has in abundance. “Clairvoyance” comes from the French, meaning “clear seeing”. It refers to the power to see an event or image that appears in the past, present or future. This type of sight usually does not occur with our physical eyes but with our “inner eye”. Or, as Athena refers to it, using her higher mind to tap into the Flow. She is also adept at psychometry; she can touch an object belonging to someone and receive information about that person in the form of visions and/or auditory feedback.

The Flow, to her and others of the Delphi bloodline, is an unseen dimension of energy that encircles the planet and which contains the information and historical records of the human race from the dawn of man to the timeless future. It can be compared to a universal memory bank of the human mind and soul, or as the Hindus call it, the Akashic Records for all mankind. Like a repository of human energy and knowledge for all time, it exists on a level or dimension that cannot be measured by any of today’s instruments. Some physicists believe this dimension vibrates at a different rate than the energy given off by the material world. If string theory proves correct, these energy strings and their vibration might enable scientists and engineers to make it possible for all of us to access this dimension.

But for now and in more common language, we call it the “spiritual dimension”. As the modern-day descendants of a powerful bloodline, Athena and her mother have inherited the extraordinary abilities of this “inner eye” or “higher mind” that allows them to access this other, unseen dimension.

So how can the rest of us mortals, who are not heirs to the Delphi bloodline, develop our own clairvoyant abilities? There are numerous books on the subject and private institutes for psychic research can be found in the United States. Many of these institutes conduct workshops for those who want to develop their intuitive talents. There are ESP/psi labs in highly reputable academic institutions, also, such as Stanford Research Institute (SRI), Princeton and the University of Virginia. I took a weekend ESP workshop conducted by a Czech physicist who once worked for the Moscow Institute for Psychic Research. What I saw with my own eyes and experienced first-hand changed my life in several ways. I went in a total skeptic and came out, a believer.

The Department of Defense has recruited and trained members of the Stargate Program to be remote viewers (clairvoyants who can “see” specific targets such as foreign missile silos and drug-running ships). Make this topic YOUR special hobby and soon you’ll be “seeing” things more clearly. Study this phenomenon, take an ESP Workshop, read about the many people who claim to have various forms of ESP powers and challenge the skeptic in you. And don’t be surprised if your intuitive abilities, at the very least, expand beyond your wildest imagination.

I did, and I was. But not any longer.

Athena Butler, the twenty year-old descendant of an ancient bloodline of psychics, yearns to lead a normal life. She wants a career, a boyfriend, independence. Her clairvoyant powers, however, have taught her that people can be false and dangerous. Although warned to keep her gift a secret, she's recruited by law enforcement to help search for a serial killer and uncover a terrorist cell. Can Athena stay alive long enough to fulfill her dream?

Kas pointed at one of these gravel paths that led through a thicket of oak trees. He seemed to observe how Spartacus was glued to Athena’s side, his tongue flopping out happily, and his tail wagging excitedly.

Kas led her down the back terrace steps to the gravel path behind a row of shrubs surrounding the pool and patio. They’d have to cross twenty acres—about a half-mile, Kas said—to the family’s boat dock.

Kas gazed at her with a speculative look. “Women like Alex. He’s the family charmer. Guess he stole your heart, too.”

“He usually takes a long time to warm up to people.”

Athena scratched under the German shepherd’s long jaw. “Like his master, I suppose. We became friends yesterday during the ski boat ride. Spartacus told me a lot about you and how he feels about you. You’re his sun and moon, his alpha and omega. He showed me all the things you do together.”

Kas halted on the path. “You read my dog’s mind?”

She didn’t mean for her tone to be so defensive, but out it came. “Well, yeah. It’s what I do. I was holding him in the boat. He doesn’t think in words, of course, but the visual imagery and feelings were there.”

He shot her a crooked smile, then slapped a palm against his thigh, a signal for Spartacus to heel at his side. The dog looked over at his master, back at Athena, gave a whine, and reluctantly moved away from her.

He mock-growled at his dog, which caused Spartacus to perk up his ears. Something was going on with these two-legged humans but the dog didn’t know what.

“That’s for being a traitor, boy. Telling this girl our secrets.”

Athena grinned. “Don’t worry, he didn’t reveal secrets about any of your girlfriends. I don’t think Spartacus knows or cares about that.”

“C’mon, boy.” Kas beckoned as Spartacus rubbed his fur against his master’s leg.

“You’re something else, Athena,” he added, “You’re here three days, and already stealing my dog. But you don’t want Alex? Most women I see hate my dog but crush on Alex. You’re a strange one.”

She almost tripped. Somehow his words both pleased and stung her. “Strange, huh? Well, I don’t think I want to be friends with you after all.”

He snorted but kept on walking, leading her down the path. “No danger of that happening. I don’t make friends with tall, pretty blondes, especially if they have ESP.”

He thinks I’m pretty. That thought unsettled her more than she wanted to admit.

“Because of your mother’s precog dream? She saw you ending up with a tall blonde?”

“Maybe. She said the tall blonde would have the gifts of the ancient Greek priestesses. That kind of narrows it down, doesn’t it? But hell, no one tells me what my future’s going to be, not even my own mother.” He stopped and fixed his gaze on her face. “Anyway, by strange I meant unique, special. What you, your mother, my mother have—this bloodline of females is extraordinary. You need to be protected.” He looked away and continued walking. “Alex and I do what we can for Mom. We guard her secret. We don’t let the outside world exploit her. Your mother has her husband. I suppose you’ll have to find a protector, too.” Kas looked down at Spartacus, who was trotting alongside. Athena heard his implied message: Don’t expect me to be him.

“Yes,” she said, her chin up, “perhaps. Right now I can protect myself.” 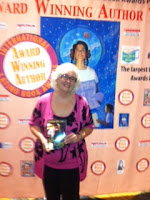 Donna Del Oro lives in Northern California with her husband and three cats. She taught high school and community college English classes for 30+ years and is now happily retired. When not writing novels or reading voraciously, she travels and sings with the medal winning Sacramento Valley Chorus. Donna is a member of Capitol Crimes, the Sacramento chapter of Sisters in Crime in addition to the Valleyrose chapter of the RWA. She has judged RITA entries and does developmental editing on the side. Two of her novels, Operation Familia and Born To Sing, have won national and international awards. Follow clairvoyant artist Athena Butler in the next book in The Delphi Bloodline series: ATHENA’S QUEST. Website: http://www.donnadeloro.com Buy the book at Amazon or Barnes and Noble. a Rafflecopter giveaway
Posted by MJ Thomas at 4:00 AM