In Defense of the Moth by Johnny Newport

This post is part of a virtual book tour organized by Goddess Fish Promotions. Johnny Newport will be awarding a $15 Amazon or Barnes and Noble GC to a randomly drawn winner via rafflecopter during the tour. Click on the tour banner to see the other stops on the tour. 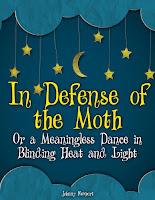 It is said the moon’s spell can move us and nobody understands her pull like Johnny Gomez.

Johnny, a devil-may-care and fatalistic salesman, remains tethered to his privileged life by a love for his children, his career and the moon—and not necessarily in that order. In fact, it’s Johnny’s lifelong passion for the moon, through both obsessive, independent study and a communal involvement in an astronomy society, that serves as the only outward distraction as a life of standard struggles waxes into a burgeoning crisis.

Until one night Johnny finds that the moon—his preferred method of self-medication-- no longer exists...but for him only and not anyone else.

Or so it seems, leaving Johnny’s continued marriage with reality to hinge on his rediscovery of the moon!

If you like allegories and/or philosophical apologies for acute insanity, grab “In Defense of the Moth or A Meaningless Dance in the Blinding Heat and Light” and join the eclipse.

“I walked past a block of shuttered buildings. Most I noticed had been shuttered for a long time, but the last office was a more recent failure. It was a beauty salon last I remembered. I reached the street corner where the tall street lamp was planted in the sidewalk and I gazed upward. A flutter of moths danced to the low hum of energy the light created. It wasn’t much and it wasn’t for long as they would be dead soon, but at least without the light of the moon they had the luck of having a substitute for their meaning, even if artificial, through man’s production.

They owe us one, I thought.” 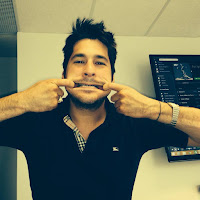 Johnny Newport (The Moth) is carrying the consciousness of the oft-failed man native to 2016. Strictly from a visual standpoint he looks like he may be kept in a nice package, but this is not so. Johnny Newport has two feet on the warpath and probably smells like last night’s street tacos.

Johnny knows that his devil-may-care attitude is unfair—to himself and to others—but this is precisely the origin for the voice of an unbridled generation of privilege; the 21st-century-livers that intimately know they have squandered (squandered what? How can we say definitively and with any assurance despite knowing that a squandering has, indeed, befallen?), and will continue to do so, happily.

Otherwise about me, I studied at the University of Texas at Austin, have spent the last two years in The Writer's Path program at SMU (Southern Methodist University, Dallas) and have applied to a handful of low-res MFA programs for fall of '16.

Short story publications in 2015 were: