All Note Long by Annabeth Albert - Spotlight and Giveaway

This post is part of a virtual book tour organized by Goddess Fish Promotions. Annabeth will be awarding a digital copy of All Note Long to a randomly drawn winner via rafflecopter during the tour. Click on the tour banenr to see the other stops on the tour.

Michelin Moses is a country music star on the rise. With a hit single under his Texas-sized belt buckle and a sold-out concert tour underway, his childhood dreams of making it big are finally coming true. But there’s one thing missing—a promise to his dying mother that he’d find it—him—when the time was right. With a little luck, he won’t have to wait too long . . .

Lucky Ramirez is a hunky boy toy who dances at The Broom Closet, one of West Hollywood’s hottest gay bars. He loves what he does, and he’s good at it—almost as good as he is at playing dumb when he spots Michelin Moses at the bar. What happens next is off the charts—and keeps Michelin coming back for more. He’s just not sure it’s the right move for his career. But if Lucky gets his way, Michelin will get Lucky—and no matter how the media spins it, neither of them will be faking it . . .

Michelin Moses had no business at a gay bar, especially not one as notorious as West Hollywood’s The Broom Closet. And the line to get in totally underscored that—the vestibule was a long, narrow tunnel filled with kids out to enjoy their Friday night. Babies, really. Fresh-faced young things who probably didn’t even need to shave jostled one another in the tight space, laughing and joking as they admired one another’s club wear and gossiped about who was fucking who.

Not that Michelin was listening in, but the space was so tiny it was hard not to. He didn’t have club wear to ogle. He had “please for the love of God don’t notice me” clothes. And the idea of openly pointing to another dude in line and announcing to one’s friends, “Oh yeah, I hit that last weekend” was so totally foreign that he couldn’t help but gape a bit. The plexiglass walls of the tunnel gave off weird shadows—neither the lights outside the club nor the dim track lighting along the bottom edge of the tunnel were enough illumination.

He tugged at the collar of his Henley shirt. Damn, it was hot in here. Too small. Too tight. Not enough air. Shut up. He was not claustrophobic. If this line ever moved, he’d feel better once he was inside the Closet.

If that’s not a metaphor for your whole damn life . . .

“ID please.” Finally, the line reached the bouncers who were taking ID. Michelin couldn’t even remember the last time he’d had to stand around like this, show ID. At least unlike these nineteen-year-olds with their fake identification, Michelin’s Oregon driver’s license was likely to hold up. The bouncer was a huge guy—so tall and jacked that Michelin felt for the tiny stool that held him up—with surprisingly small, delicate hands. 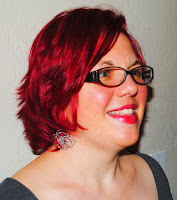 Annabeth Albert grew up sneaking romance novels under the bed covers. Now, she devours all subgenres of romance out in the open—no flashlights required! When she’s not adding to her keeper shelf, she’s a multi-published Pacific Northwest romance writer. Emotionally complex, sexy, and funny stories are her favorites both to read and to write. Annabeth loves finding happy endings for a variety of pairings and is a passionate gay rights supporter. In between searching out dark heroes to redeem, she works a rewarding day job and wrangles two toddlers.

Buy the book at Amazon, iBooks, Google Play, Kobo, or Barnes and Noble.