This post is part of a virtual book tour organized by Goddess Fish Promotions. David will be awarding a digital copy of Recall to a randomly drawn winner via rafflecopter during the tour. Click on the tour banner to see the other stops on the tour.

Meet Red Harmon, a special ops veteran who learns he never left the call of duty . . .

To a trio of muggers, Red looks like just another suburban dad. But when they demand his wallet at knifepoint, something snaps. In the blink of an eye, two muggers are dead, the third severely injured, and Red doesn’t remember a thing. Once an elite member of the Det, a secret forces outfit whose existence is beyond classified, Red thought his active service was over.

But his memory is coming back—and a lethal killing machine is returning to duty . . .

Facing an unthinkable nuclear threat, a volatile international power play, and a personal attack against his family, Red has no choice. He must rejoin his old team, infiltrate the enemy camp, and complete the biggest mission of his life . . .

“Tony!” Lori said again. Only now did Red realize she’d been screaming it. Her eyes were wide, pleading. She pointed to the ground. One of the gangbangers lay on his belly, blood running from his legs and a small pool forming under his head. Red was bent over, knuckles clenched in the man’s hair, pulling him off the pavement. His forearm was bloody and he pressed a snub-nosed revolver at the mugger’s brain stem. Where’d the pistol come from?

The thug’s eyes were closed; he wasn’t moving. Dead? Resisting the urge to let go, Red laid the guy’s head on the asphalt.

“Tony, you don’t have to kill that one.” Her voice was shrill.

He backed up, pointing the pistol at the still body. Red licked a metallic taste from chapped lips, breathing fast and shallow as a panting dog. What the hell was going on? A tall man an aisle over held up leather-gloved hands, backing away. He ducked into a Dodge Charger, tires squealing as he accelerated out of the parking lot.

Red slowed his breathing, then turned to Lori. “The kids?” Where was the Explorer? He spotted it a few spaces away. The shopping cart lay to one side, three boxes of number two pencils scattered across the pavement like pickup sticks. He jumped over the mess, landing next to two bloody heaps, the bodies of the other muggers. He squinted as the light reflected off one of the scarlet pools and stifled a retch. 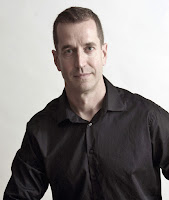 David McCaleb was raised on a rural farm on the Eastern Shore of Virginia. He attended Valley Forge Military College, graduated from the United States Air Force Academy, and served his country as a finance officer. He also founded a bullet manufacturing operation, patented his own invention, and established several businesses. He returned to the Eastern Shore where he currently resides with his wife and two children. Though he enjoys drawing, painting, and any project involving the work of hands, his chosen tool is the pen.

Recall is the first novel in the Red Ops series.

Buy the book at Amazon, iBooks, or Kobo.