The Renaissance Club by Rachel Dacus

Rachel Dacus is visiting with us today to celebrate the release of her newest book The Renaissance Club. Discover five surprising things you might not know about Rachel Dacus.


Five! That’s a fairly tall order. Speaking of tall orders, #1 has to do with height. My name is on a piece of space junk orbiting the Earth. That’s something most people would never guess about anybody, but most people didn’t grow up as a rocket scientist’s kid. My father worked for Thompson Ramo Wooldridge (now TRW) when I was a kid in the race-to-space 1950s. His job was, basically, to blow up rockets. That was his job because they had to keep blowing them up until they found a liquid fuel mix that could propel a rocket high enough to get into space. The purpose of this was to be able to scare the Soviets with the threat of a rocket that could decimate their country. The Soviets had already developed such a rocket, and America had to catch up, or possibly become toast—literally, a toasted continent. Dad’s missiles eventually worked, we developed the Atlas, which is still in use. One day my father took me and my brother to see the hangar where the missile was. He had someone write our first names on a first stage of the rocket. This is the part that’s jettisoned when the second stage ignites and kicks the missile higher. The discarded first stage piece goes into orbit indefinitely, and it did, bearing our names. I remember the day he took us to the hangar and we saw the names, right there on the side.

#2 is that I’ve written 14 musical plays. Call me Hammerstein. Okay, but don’t call me Oscar. I have had some produced and it’s some of my greatest fun to sit in on rehearsals, blow kisses to the cast, and then argue with the director. Musical theater is something I adore, in part because it ties together several types of writing I do, namely narrative, drama, and poetry (song lyrics are close to, but not the same as poetry). It’s like doing crossword puzzles: so hard you can’t resist. A very tight structure to play inside.

A fact that surprised me to remember is #3: I once received lessons in juggling in exchange for giving ballet lessons to a circus troupe. I’ve forgotten how to juggle, though I remember how you do it (keep your eye on the ball in the air at all times). I’m sure I could revive the skill with practice. Juggling is something I believe they should teach in grammar school, when we could all learn it easily, and even small town streets might be filled with strolling jugglers.

#4: I have a Shakespeare in my family tree. You wouldn’t know it to look at me. I hope.

#5: My terrier’s full kennel name is Elfinsilk’s Teresa d’Avila. It’s a remnant of the time when I was beginning to write The Renaissance Club, and Saint Teresa of Avila was a character involved with my time-traveling heroine, May Gold. I know, a half-Jewish art historian having discussions with a dead Catholic saint. It really worked, I thought. And when I got a new puppy, I named her in the lively saint’s honor. Yes, she was really a very lively saint. And now a very lively puppy. (St. Teresa later disappeared from the novel.)

May Gold, college adjunct, often dreams about the subject of her master’s thesis - Gianlorenzo Bernini. In her fantasies she’s in his arms, the wildly adored partner of the man who invented the Baroque.

But in reality, May has just landed in Rome with her teaching colleagues and older boyfriend who is paying her way. She yearns to unleash her passion and creative spirit, and when the floor under the gilded dome of St Peter’s basilica rocks under her feet, she gets her chance. Walking through the veil that appears, she finds herself in the year 1624, staring straight into Bernini’s eyes. Their immediate and powerful attraction grows throughout May’s tour of Italy. And as she continues to meet her ethereal partner, even for brief snatches of time, her creativity and confidence blossom. All the doorways to happiness seem blocked for May-all except the shimmering doorway to Bernini’s world.

May has to choose: stay in her safe but stagnant existence, or take a risk. Will May’s adventure in time ruin her life or lead to a magical new one? 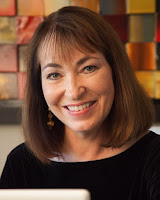 Rachel Dacus is the daughter of a bipolar rocket engineer who blew up a number of missiles during the race-to-space 1950’s. He was also an accomplished painter. Rachel studied at UC Berkeley and has remained in the San Francisco area. Her most recent book, Gods of Water and Air, combines poetry, prose, and a short play on the afterlife of dogs. Other poetry books are Earth Lessons and Femme au Chapeau.

Her interest in Italy was ignited by a course and tour on the Italian Renaissance. She’s been hooked on Italy ever since. Her essay “Venice and the Passion to Nurture” was anthologized in Italy, A Love Story: Women Write About the Italian Experience. When not writing, she raises funds for nonprofit causes and takes walks with her Silky Terrier. She blogs at Rocket Kid Writing.