Revision is a Process by Catherine E. McLean


What comes first, the plot or characters?

Most writers don't realize that. You see, a word, phrase, headline, or anything can trigger curiosity that sets the imagination into pondering "what ifs" until a story blossoms. That initial story dump of information might be a character sketch, the idea for the plot that then needs characters, or it could be a scene with character interaction over some situation or looming problem.

Once I stopped trying to fit the mold of a Pantser and understood my imagination (which pigeonholes me as a Foundation Type of writer), it ceased to concern me whether character or plot mattered.

As a Foundation writer (see the note at the end about getting a free copy of "10 Types of Writers"), my imagination will work on an idea, then give me a full blown scene with characters dealing with a problem or facing some sort of danger. That scene might be ten pages or a hundred. Then there is nothing more. That's because everything I need to know about the story is in that dump. All I have to do is figure out the rest and ask more questions of my imagination so it comes up with answers that fit the character or the plot and story's theme. For example, in HEARTS AKILTER, the initial idea (which I entered in 1996 to my Bits & Pieces binder, where I keep all my ideas or stuff that would trigger a possible story or novel, was— What if a robot thought it was having a heart attack?

From time to time while going through the Bits & Pieces book, I would read that line and wonder how it could be made into a story. The hang-up was this: The robot is small. It is full of micro and mini pulleys and gears, hydraulic systems, etc. There is not much room inside for anything else. So, what can cause the heart attack that runs from where a human heart might be inside the robot down his left appendage? Obviously the first thing to come to mind is a short circuit, which is just too trite. And then, in 2008, it came to me— there is a bomb inside the robot. Which led to asking a series of questions:

* What is the maximum size of a bomb, say plastic explosive, that could be put into such a robot?
* What is the maximum explosive power of such an explosive? Here's where I spent a long afternoon online looking up various explosives and their boom. With all the searching, I figured Homeland Security might even come calling or put me on a watch list. At any rate, I discovered a few explosives that had potential and tweaked the power and range just enough to work in the story and be believable.
* Who was the target of the bomb? And why?
* Who put the bomb inside the robot without anyone else knowing about it, not even the robot itself?
* Who was the best person to disarm the bomb? Of course, the answer is a bomb expert.
* Who could discover the bomb? Obviously a maintenance technician, one who worked on such a robot's inner workings.

As you can see, the original idea contained a character (a robot) in need of the right plot.

Do you keep a file of story ideas?

NOTE: For a free download of 10 Types of Writers go to http://www.writerscheatsheets.com/free-writers-cheat-sheets.html 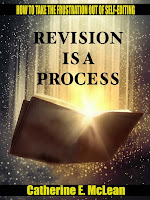 A first draft holds the possibility of what will be a great story. Revision turns that rough diamond into a spectacular gem worth a reader's money and time.

Writers are individuals but to be a producing writer means creating a system to revise and polish a work so the reader thoroughly enjoys the story. REVISION IS A PROCESS is a guidebook for writers and authors that shows how a simple 12-step process can be tailored to eliminate the most common and chronic maladies of writing genre fiction. This valuable guidebook contains secrets, tips, practical advice, how-to's, and why-to's for taking the frustration out of self-editing.

Read an Excerpt from Section 7, Show Don't Tell - What to Cut or Change:

One rule of fiction is to show more and tell less.

What does that mean?

A very simple example is that saying it's a flower is telling but to say it's a white rose, its petals edged with a mist of ruby-pink is showing.

Showing means providing an instant, vivid image so the reader sees in their mind what was meant.

Yes, showing requires more words than telling, but how much detail is too much detail when showing?

Keep in mind that readers will stop reading and skim over sentences and paragraphs of details in order "to get to the good stuff" of drama, action, and something happening of interest. So it's best to choose all descriptive words carefully and keep the passages succinct.

Now— Go through your manuscript and highlight all descriptive phrases and passages so you can see how much of the total text is description.

If using your word processor's highlight feature, pause to zoom down to view entire pages and look at the end of pages to see how much carried over to the next page.

If you have exceeded three sentences (20-60 words) of description or explanation at any spot, that may be overkill. Determine what needs to be cut, pared down, rewritten, or reparagraphed for visual effect and immediacy, and what is too lengthy, mundane, or bordering on boring.

It's also important, when revising such areas, to remember that the replacement words should be in keeping with the story's or scene's narrator—and not you, the author, stepping onto the page with your voice, (that's a type of Author Intrusion that readers hate).

Catherine E. McLean's lighthearted, short stories have appeared in hard cover and online anthologies and magazines. Her books include JEWELS OF THE SKY, KARMA & MAYHEM, HEARTS AKILTER, and ADRADA TO ZOOL (a short story anthology). She lives on a farm nestled in the foothills of the Allegheny Mountains of Western Pennsylvania. In the quiet of the countryside, she writes lighthearted tales of phantasy realms and stardust worlds (fantasy, futuristic, and paranormal) with romance and advenure. She is also a writing instructor and workshop speaker. Her nonfiction book for writers is REVISION IS A PROCESS - HOW TO TAKE THE FRUSTRATION OUT OF SELF-EDITING.