The Sea Archer by Jeny Heckman

This post is part of a virtual book tour organized by Goddess Fish Promotions. Jeny Heckman will be awarding a $50 Amazon or Barnes and Noble GC to a randomly drawn winner via rafflecopter during the tour. Click on the tour banner to see the other stops on the tour.

I like the idea of creating different worlds, or having the fairytale/nightmare come to life. Everything doesn’t have to fit in a neat or socially acceptable box and the most unthinkable twists and turns can occur.

The Sea Archer isn’t a world built from scratch and in fact if you get it wrong you will hear about it. There are many followers of Greek mythology, so the research had to be pretty close or if not, needed to be plausible that it could happen, within their realm. I tried to look at it from the perspective that a lot of famous stories were written about amazing events. However, what about the other days? You can’t record everything for posterity’s sake, so what you do write must be believable.

I think women are incredible. I think their level of strength is one of the most underrated attributes about them. I think Raven always had a strong core, she just needs to tap it. The same with men, I think their strength is an overrated attribute. We are making progress with each new generation but men are supposed to feel and be able to rely on their love when they need it most. So, what I learned is I think people are more like my characters than not, flawed but with the ability to grow and appreciate their weaknesses for something better.

Not really. The only quirk I have is when physically handwriting something, I have a little OCD. If I make a mistake I have to start over. This is only problematic because generally I use ballpoint pens rather than pencils.

I was a pantser that became a plotter with this series. In fact, I’m not entirely sure how people write a series and not be plotters. Although at conferences, I hear people say they’re pantser’s often, I just can’t fathom how they keep track of it all.

My mouse, mouse pad, and a three-fold picture frame, that has photos of my husband, Jeff, my daughter, Paisley and my son, Charlie. There’s a candle, that’s always burning because it’s relaxing, and then my printer and a lamp.

I’m deep into writing book two of The Heaven & Earth series. I’m about halfway done and once that goes to editing I’ll be starting book three and also possibly a historical romance.

Oh, only a few million! I guess some big ones are, how much back-story do you like as readers, or how long can a prologue be without being too long? When reading sex scenes are you Team "keep it simple" or Team "the steamier the better"? As a reader, are you willing to sacrifice complete understanding of a story and trust the author to take you on a journey that, over time, will give you crystal clarity at the end of the series? Or do you want complete closure at the end of each book installment? I hope those questions made sense.

I’d like to thank It’s Raining Books, for having me here today. It’s been a lot of fun. To the readers, thanks for hanging out with me. I hope you'll come visit me on my website at http://www.jenyheckman.com. I'd be happy to answer any questions you may have. I sincerely hope you enjoy The Sea Archer. Cheers! 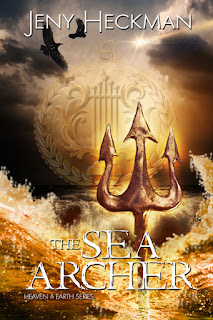 Raven Hunter, a musical prodigy, flees to the Hawaiian Islands to pick up the pieces after her marriage to her manager collapses. Instead, she experiences extraordinary and unsettling events that are beyond her understanding.

Living in paradise, marine biologist, Finn Taylor has the unconscious but effortless ability to understand the needs of the animals he cares for. His playboy lifestyle is most men's fantasy. That is, until the night he meets the shy and elusive new island resident. Suddenly his life no longer feels like his own.

The attraction is undeniable. However, vastly contrasting lives, peculiar dreams, and an unbelievable proclamation that they could be the direct descendants of Poseidon and Apollo threaten to divide them forever. Will they accept their destiny and begin the quest of a lifetime or will they remain in their comfortable yet separate existence?

"Where's the one place you've never been?" Que asked, trying to keep her on track.

"Hawai‘i?" Que's brow furrowed. "That's here. Don't you wanna go to, like, the Bahamas or something? How have you not been to Hawai‘i?"

"Donovan always wanted to play the massive arenas and big cities, and for some unfathomable reason that didn't include the islands."

"You should do it then. Take some time, figure it out."

"What about my tour dates?"

"You'll get ‘em from, whoever, then call and cancel them. Hell, you can even interview new people to run the works while you're there. You're in the position to do that now, Rave. People would fall all over themselves to come to you. The point is to go away and figure it all out."

She bit her bottom lip and thought about all the problems this idea would bring until her brother spoke the next words.

"What're you afraid of, Rave? What do you have lose?" 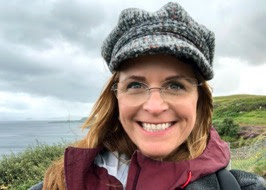 Jeny Heckman, loves romance. She especially loves romance with a paranormal and/or historical twist. When not ignoring her family and friends by writing you will find her time exclusively on them and photography. Jeny lives in Stanwood, Washington.