This post is part of a virtual book tour organized by Goddess Fish Promotions. C.L. Colyer will be awarding a $10 Amazon or Barnes and Noble GC to a randomly drawn winner via rafflecopter during the tour. Click on the tour banner to see the other stops on the tour.

As a reader, my go-to genre is middle-grade fantasy. Whenever I’m in a reading slump or want an escape from reality, I know I’ll find it between the pages of a middle-grade novel. The magic is bold, the dreams are big, and the adventures vivid, wild, and exciting. I love visiting the different worlds and seeing the wonders, the magic, and the friendships. Especially the friendships. So for me, it wasn’t a surprise that the first book I penned was a middle-grade fantasy. That wasn’t Atticus’s story. His came many years later.

I like to research the lore about the supernatural elements in my novels and then give them my own twist. With this book, that meant brushing up on the classic monster—Dracula, the wolfman, and Frankenstein to name a few—and then dropping them into modern days with a kid-friendly twist and a mystery to solve.

With the right attitude and a little help from friends, a person can turn themselves into anything they’d like.

I’m sure I do, but I don’t consider them odd. To me, they’re normal. Maybe that I don’t talk about ideas for new books until I flush them out, and even then, I like to have at least fifty percent of a first draft written before sharing any pages with my critique partners.

It depends on the book and what genre I’m writing. With my middle grade and young adult novels, I’m a pantser, but with these books I tend to know how the stories will end and several of the steps the characters would take to get there. With my adult novels, I outlined the stories before I started to write. But then I strayed from the outline, found myself second guessing what I had, and starting over. Let’s just say I’m still trying to perfect the art of outlining.

My 7-week-old grandson in his basinet. I’m helping out his parents for the day. He’s napping right now—my grandson, not his parents.

I’m working on an adult contemporary romance with the characters from my novella, Merry Little Wishing Spritz. I’ve also jotted down a few ideas for a second book featuring Atticus and Draco.

What’s your favorite supernatural creature? It can be one of the classic monsters, a superhero, a witch, a fairy, a mermaid, you get the idea. Mine’s witches. I have always thought it would be fun to have magical powers.

Thank you, It’s Raining Books for having me on your blog! 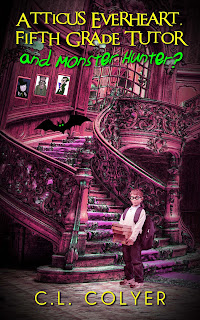 Nothing frightens Atticus Everheart more than monsters, thanks to his older brothers, who often threaten to feed him to the beastly creatures.

Fearing that’s what they will do if he doesn’t replace the book he accidentally ruined, he takes a job tutoring a boy in his neighborhood.

Although nervous about the job, Atticus soon discovers there’s a lot more in store for him than teaching. Never in a trillion years would he have imagined he’d be hiding from monsters, working with ghosts, or searching for werewolves and witches. He’s not brave, and he has no plans to change.

Until he’s forced to.

“What?” called Atticus to his retreating student.

He had to have heard wrong. Drago hadn’t said, “dead.” He’d said, “red.” No, the color didn’t make sense either. “Fred.” That’s what Drago had said; it was probably short for Frederica.

Feeling better, Atticus made a mental note to clean the wax out of his ears when he got home, then jogged up the stairs after Drago.

“Please take the spelling test! We’re supposed to be studying!” Under his breath he added, “You don’t struggle with lessons, do you? You’re easily distracted.”

Drago had a shorter attention span than Evie, and that was saying something. Atticus’s littlest sister bounced from subject to subject faster than his father surfed TV channels.

“Look, take the pretest, and then you can introduce me to your grandmother.”

“I’ll take it after you meet her.”

Atticus tripped over a step, caught his balance, and continued his ascent, keeping one hand on the railing. Would Drago’s mother fire him if she found out that Atticus hadn’t taught Drago a single word? Was it Atticus’s fault? He had tried to choose easy words, but home did have a silent e. There’d been a time when Atticus had forgotten about it too.

“Is home too hard? How about batty?” said Atticus, throwing out the first word that came to mind. Batty described his student. B-a-t-t-y, meaning nuts, wacko, cuckoo. 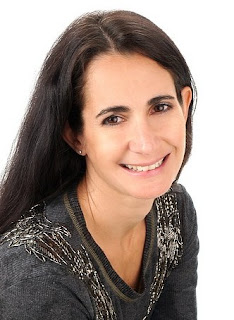 C.L. Colyer found her love for writing in first grade when her class was sent to the library and asked to find a book for their first book report. While she doesn’t still have this book report, she’s very proud to say she got an A on it. Her favorite thing about the book was that it had no words. That’s right, not one! That gave her the freedom to interpret the pictures in any way she wanted and write her own story.

This sparked her love for writing essays. It wasn’t until she was an adult that she sat down and penned her first novel. This story has a special place in her heart because it’s the story that helped her discover her passion for writing. She has since written several books, many of which may never see the light of day, but all of which helped her learn to combine her passion for writing with her fascination with all things mythical. You’ll find examples of this in her novels.