All the Colors of Love by Jessica Freely -- Spotlight and Giveaway 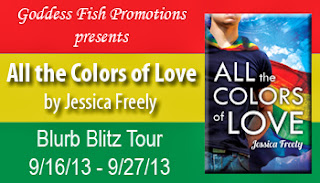 This post is part of a virtual book tour organized by Goddess Fish Promotions. Jessica will be awarding a $25 Amazon/BN GC to one randomly drawn commenter during the tour. Click on the tour banner to see the other stops on the tour.

It sucks being the son of a super villain. At home, Harry spends half of his time getting medical treatments and the other half tied up in his father's underwater lair. It was different when his mother was alive, but she disappeared when Harry was six. He can't seem to stay out of trouble at school, and his new roommate, Antonin, thinks he’s a spaz, but somehow Harry has to find a way to stop his father's evil plans.

Antonin Karganilla wants to become a comic book artist, but other than that, being gay is the most normal thing about him. His uncle is an aquatic plant man, his aunt is a molecular biologist back from the dead, and his mom is an overprotective pain in the butt. Antonin's in boarding school and it's starting to look like he and this Harry kid might have a lot in common... and that means a whole new set of problems.

He just wasn’t used to feeling like this, was all. Sometimes when he was alone he shook with it -- pinpricks of terror all over his body. Terror because he couldn’t quite understand how someone as fucked up as him could feel this good.

But then he’d think of Antonin, and he’d remember.

Harry took his customary seat at the back of the class and settled in for an hour of mysteryspeak from Professor Brill. Not Antonin, though. Antonin sat up at the front of the class with his notebook and his pencil, ready to take notes.

Harry had known Antonin was smart from the get-go, and it hadn’t taken long for him to appreciate his fine, fierce beauty either. But it wasn’t until Antonin assured him with calm and deadly certainty that the Old Man was as good as dead that Harry appreciated just how savage Antonin really was. If there was any chance at all of ridding the world of his father, it lay with Antonin along with every other hope Harry had ever had.

Brill was blathering on about the square of the hippopotamus or something, and for no reason at all, Antonin glanced over his shoulder at Harry with a little smile. Later he’d probably nag Harry for not taking notes, but Harry wouldn’t really mind. It was worth it to get that glance and that smile, a snapshot moment of dark eyes and soft lips that he could spend the rest of the day falling into.

He was in such deep shit. 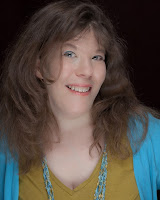 Jessica Freely can't resist a wounded hero. As a reader and a writer, her favorite stories are of soul mates finding redemption in each other's arms. Married to the love of her life in a beautiful relationship based on mutual goofiness, Jessica also warps minds as an instructor in Seton Hill University's Writing Popular Fiction MFA program. Her dog, Ruthie, doesn't seem to care that Jessica's an award-winning and best-selling author in multiple genres. She just wants to play tug of war with Jessica's pages.

Buy the book at Dreamspinner Press
Posted by MJ Thomas at 6:19 AM