A special It's Raining Books welcome to Pat McDermott who is here to talk with us. Her first contemporary romance, The Rosewood Whistle, is out and is available on Kindle and in Paperback from Amazon and other online book sellers. Leave a comment for a chance to win a print copy of The Rosewood Whistle.

My stories cross several genres, incorporating fantasy, alternate history, science fiction, action/adventure, and romance. It’s the “what if” thing that acts as a catalyst for me. Most of my stories are set in a modern Ireland still ruled by the heirs of a medieval High King, the result of my tinkering with Irish history. But history remained unchanged for The Rosewood Whistle, my first adult contemporary romance. I wrote this “autumn” romance as a tribute of sorts, not only to one of my favorite Irish towns, but also to Ireland’s wonderful traditional music. Each chapter title contains a phrase from an old Irish song, though no one needs to know the songs (or have even a drop of Irish blood) to enjoy the story.

A reader must willingly suspend disbelief upon entering any author’s book world. For fantasy etc., the author’s unique locations and rules must remain consistent throughout the story, no easy task. For contemporary fiction, a familiarity with the locale, whether firsthand or researched, is essential. I’ve had the good fortune to visit both County Mayo and Dublin, the settings for The Rosewood Whistle, several times. My research also included lots of reading about local legends, Irish slang and proverbs, and the psychology behind the terror the victim of a bad marriage might feel when offered a second chance at love.

Widowed after less than ideal marriages, both Ben and Gemma enjoy hard won but lonely independence. For companionship’s sake, they risk trusting each other with the intention of enjoying a summer romance, but a series of misunderstandings sabotages that trust. Yet their resilience and determination help smooth the way to a suitable understanding that just might lead to a lifetime of love. What I learned? No one should underestimate the resilience of the human spirit. The deepest despair mustn’t rule out hope.

No superstitions, but making a good strong cup of tea is always the first order of business, and my daily desk calendar has to display the new day before I do anything. Only then will I choose a Quiet Music playlist from my media player and get to work.

A little of both, though mostly a pantser. I always start a story by doing lots of research, which I know will give me plenty of ideas for subplots. The outline approach helps organize my thoughts, but outlines aren’t written in stone. In fact, they become useless when the story takes off on its own and the characters rebel and start dictating to me.

My poor typing stand, overburdened with notes and To Do items. Above it are shelves packed with reference books. Below it, on the floor, is the cat bed, where my three favorite writing assistants are cuddling together in one of their many daily naps.

Right now I’m preparing to write the third novel in my young adult “Glimmer” series, paranormal adventures that feature Ireland’s fairies (who don’t seem to mind that I write about them). Research is ongoing, and I plan to return to Dublin this autumn for further fact finding, or to find such facts as one can find about fairies, with their permission.

Yes! Does knowing too may personal details about an author interfere with your enjoyment of a story?

On her own at the end of a long and difficult marriage, Gemma Pentrandolfo still hears the critical voice of her husband taunting her from his grave. To foster her independence, she schedules a summer vacation in County Mayo intending to write her first book, and she’s counting on Ireland for inspiration. An idea presents itself when she tours Achill Island with a silver-tongued tour guide whose good looks prompt her to write more than her high-minded novel: she transcribes her years of longing in a steamy fantasy no one is meant to see.

Years have passed since an accident claimed the self-absorbed wife who scorned Ben Connigan and his music. Since then, the former tin whistle ace has avoided marriage, though he never lacked for female companionship before he traded his high-tech career for the slow-paced life of a hometown tour guide. Ben has accepted the end of his run of discreet affairs, until he takes Gemma touring. Her passion for Ireland impresses him. Her love of Irish music soon compels him to dust off his whistles. Knowing she’ll leave at the end of the summer, he sees no harm in keeping her company—until he dares to dream of spending the rest of his life with her.

But he knows it can’t be, not while the ghosts of their partners still haunt them. Not unless the music and myths of Ireland can help them find their way…

His grandfather's steady hands had often caressed the tattered terrycloth. Warmed by the memory, Ben brought the towel to the bed and unfolded it. His whistles were inside. Would they forgive him for neglecting them? He picked up the C whistle, larger than the D, though his long fingers easily covered the extra ground. The metal felt cool in his hand, its black finish rusted in spots, the gold paint around its six holes worn. He tried something simple, a tune he'd sung as a child. He imagined his grandfather nodding, approving, and then Gemma Keenan was smiling at him. The child's song turned to a waltz, and he saw himself dancing with her. She reached for him when the next tune began, and he played to keep her in his arms. 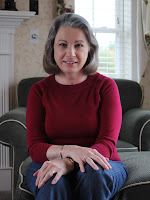 Boston, Massachusetts native Pat McDermott writes romantic action/adventure stories set in an Ireland that might have been. Glancing Through the Glimmer and its sequel, Autumn Glimmer, are young adult paranormal adventures featuring Ireland’s mischievous fairies. Both books are “prequels” to her popular Band of Roses Trilogy: A Band of Roses, Fiery Roses, and Salty Roses. The Rosewood Whistle is her first contemporary romance.

Pat is a member of the New Hampshire Writers’ Project, Romance Writers of America, and Celtic Hearts Romance Writers. Her favorite non-writing activities include cooking, hiking, reading, and traveling, especially to Ireland. She lives and writes in New Hampshire, USA.