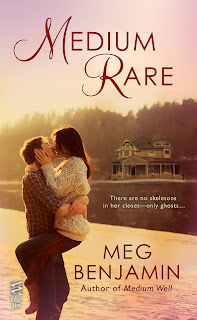 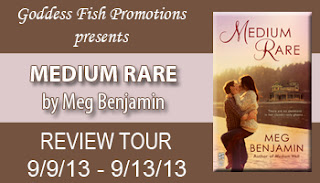 There are no skeletons in her closet…only ghosts

Rose Ramos was a reference librarian, until she inherited her grandmother’s house—and the family talent for connecting with the other side…

Moving into the lovely Victorian in San Antonio’s King William District is a dream come true for Rose—and also a nightmare. That’s the only explanation she has for the man hovering above her bed. But Skag is a ghost who’s been part of Rose’s family for generations. And now he’s all hers.

When Evan Delwin, a reporter out to debunk the city’s newest celebrity, posts an ad looking for a research assistant to investigate a famous medium making his home in San Antonio, Skag suggests that Rose apply for the job. Delving into the dark side has its own dangers for Rose—including trying to resist Delwin’s manly charms. But as the investigation draws them closer together, the deadly currents surrounding the medium threaten to destroy them all…

With a great set of protagonists, fascinating secondary characters and a storyline that intrigues, Meg Benjamin has penned a story I very much enjoyed.

I loved having a medium and a skeptic paired together.  Realistically attracted to each other, but aware of the pitfalls of their attraction made for an interesting bit of tension.  Rose kept mum about her abilities for a very long time, because how to do you explain to someone like Evan that you have a ghost in your house who helps commune with the other side in order to locate missing items?

Evan has surprises of his own ... things that are a surprise even to him.  He was believable and interesting and just a really three dimensional character.

I loved, LOVED Helen and Lenore ("moron").  Every time they showed up in a scene I had to smile.  Really, they completed a well rounded cast of characters here, and of everyone I was most attached to them.

There weren't many downsides.  I did think Rose took having a ghost in the house a little too smoothly.  And the story was a little slow to start, but interested me enough that I wasn't tempted to stop reading.  Thankfully, despite being second in a series, it stands alone quite well. There were a few allusions to things that happened in the first book, but this story itself is quite solid on its own.

Ms. Benjamin is quite a master of prose.  I enjoyed her voice and commend her on her skill.  But, truly what makes this book something I can happily recommend are the characters, even though the plot (once it really got rolling) was definitely a page-turner.

Suddenly, she heard the sound of paws galloping along the driveway, monstrous claws clicking on the asphalt. She fumbled for the key she kept in the old mailbox at the door, jamming it into the lock and twisting for all she was worth.

Close behind her, something yipped as she shoved the front door open, half falling through, trying to shove it closed with her shoulder. A large heavy projectile struck her chest with the force of a missile, blowing the door wide and throwing her down full-length just inside. She looked up into an immense mouth full of yellowing fangs. Threads of drool hung a few inches from her face.

She tried to twist away, pulling as far back as she could beneath the dog’s weight. Dread clenched her stomach as she closed her eyes. “Ohgodohgodohgod.”

“Rose!” Skag’s voice echoed through the hall. “That’s a hellhound. Stay absolutely still! Do not move!”

She couldn’t have moved if her life depended on it, which, of course, it probably did. The dog’s huge paws still held her shoulders flat against the floor. Its breath blew hot against her cheeks, smelling of old meat and open graves. She struggled to breathe under its weight, tensing for the moment it would clamp its teeth on her throat. She heard the faint creak of its jaws as they opened wider.

And then something large, damp, and utterly disgusting swiped across her cheeks.

She peeked through her lashes up into the dog’s face. Glowing orange eyes stared back as the animal prepared to lick her again. 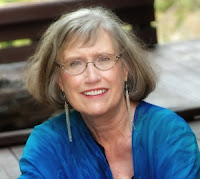 Meg Benjamin is writes contemporary romance for Samhain Publishing and paranormal romance for Berkley InterMix. Her books have won an EPIC Award for Contemporary Romance, the Romantic Times Reviewers’ Choice Award, the New England Romance Writers Beanpot Award, and the Holt Medallion among other honors. Meg lives in Colorado. Her Web site is http://www.MegBenjamin.com and her blog is http://megbenj1.wordpress.com/. You can follow her on Facebook (http://www.facebook.com/meg.benjamin1), Pinterest (http://pinterest.com/megbenjamin/), and Twitter (http://twitter.com/megbenj1). Meg loves to hear from readers—contact her at meg@megbenjamin.com.
Posted by MJ Thomas at 4:00 AM