The Descent from Truth by Gaylon Greer -- Excerpt and Giveaway 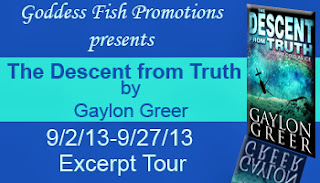 This post is part of a virtual book tour organized by Goddess Fish Promotions. A randomly chosen commenter will receive an autographed hardcover version of the author's previous book, The Price of Sanctuary. Click on the tour banner to see the other stops on the tour.

Alex Bryson is patrolling Rocky Mountain backcountry in his job as a security guard when he discovers a woman with a baby wandering alone in the snow far from the nearest road. He takes them to shelter in a weekender cabin and sees a newscast that suggests the woman, Pia Ulmer, kidnapped the baby from its rightful parents and that it is the sole heir of Peru’s wealthiest and most corrupt family. Pia claims that she is the baby’s mother, and Alex doesn't know what to believe. After turning her in, he continues to struggle with his budding feelings for her and remains unsure of the true story. He becomes more and more involved until finally there is no turning back—lives are on the line. He helps Pia get free from a brutal world that values money over life, and together they devise a plan to reclaim the baby. Just when it looks like they might succeed, they discover an international conspiracy that changes the game entirely.

Dominga Koenig turned away, leaving Faust to close the door. “White Russian,” she said, and pointed toward a wet bar on the far side of the room.

Until he became Maximillian Koenig’s chief of security, Faust had never heard of a White Russian. But the aging multibillionaire’s young wife took him in hand. She replaced his entire wardrobe, corrected his careless speech and his table manners, and arranged introductions to politicians and businessmen. She also taught him to make her favorite drinks. The wet bar was fully stocked, he noted as he concocted her version of a White Russian, using equal parts Tia Maria, vodka, and Bailey’s Irish Cream. He eyed the vodka hungrily. Gray Goose, always his first choice. Later she would invite him to make himself a vodka martini. He preferred his vodka straight, chilled and with a lime twist, but she insisted that he go through an elaborate ritual to craft her idea of a perfect dry martini.

Standing before a pair of glass-paneled French doors that led to a spacious patio, she kept her back to him while he mixed her drink. As he approached, drink in hand, she turned to take it from him and set it aside.

Then she slapped him. The heel of her hand slammed into his jaw.

She was not a large woman, but she was solid, well-conditioned, and coordinated. The roundhouse blow, starting at knee level and gaining momentum during a wide arc, driven by the propulsive force of her body, rocked him. He shook his head to clear it, worked his jaw to assess the damage.

Cradling the hand that delivered the blow, she flexed her fingers. “Why is my husband’s bastard child still breathing?” 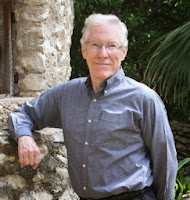 Working with traveling carnivals and itinerant farm labor gangs during his teen and early adult years took Gaylon Greer up, down, and across the U.S. and introduced him to a plethora of colorful individuals who serve as models for his fictional characters. After several years as an Air Force officer and then a university professor with a Ph.D. in economics, Greer developed an interest in writing fiction and attended workshops at the University of Iowa, the University of Nebraska, and Bryn-Mawr College. He also studied with the U.C. Davis Extension program and the Algonquian Writers Group. His most recent novel, THE DESCENT FROM TRUTH is available at www.Amazon.com and other e-book retailers. Please visit Greer at www.GaylonGreer.com
Posted by MJ Thomas at 3:50 AM