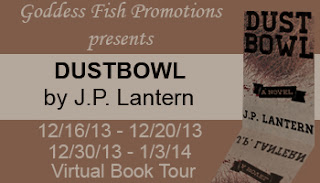 This post is part of a virtual book tour organized by Goddess Fish Promotions. J.P. will be awarding a grand prize of a $25 Amazon gift card to a randomly drawn commenter during the tour, and one commenter on each stop will receive a digital download of a backlist book. Click on the tour banner to see the other stops on the tour.

A special thanks to J.P. for coming by and being foolish brave enough to answer some of our questions. We promise we will try to make it fairly painless for you. First, why do you write in your genre? What draws you to it?

I always joke that sci-fi is great because whenever I don’t understand how something works, I can just make up something to replace it. That’s not entirely true—and often making up something completely new is more work than just understanding the thing that’s there already—but it’s a little true.

I think that it’s nice to be able to pick and choose what you want to include in your canvas of the world, and science fiction allows that to happen. For whatever reason, I like to focus on humans when they are without a lot of resources—what material deprivation does to us individually and in groups. So, that’s a little more fun in my eyes when you can use some kind of outlandish explanation to provide the backdrop for a set of circumstances.

In my book, the main character travels all over a dystopian Southwestern landscape—ravaged by war and steadily being beaten down by endless dust storms—and has to fend for himself against the elements and all the unsavory characters that this environment has created. I think that kind of setting is sort of possible in the real world—but at a certain point you’re stretching the reader’s credulity if you’re trying to say, “No really, this could all happen today.” I think people are more willing to believe, “Of course this couldn’t happen. But if it could, isn’t this how you see it working?”

Oh, I couldn’t stop researching stuff for this book. So much of it is concerned with the process of surviving on the road, and how that would work in a sort of dystopian war-torn landscape—so that requires some research. I knew that I wanted the characters in my cleaning crew—essentially, these amoral crews that go around kidnapping children to build up population for their starships—I wanted them to know how to live off the land. So I did a lot of research about trapping and skinning and building fires. I learned a lot about self-defense, and knives, and building shelters, and all that sort of thing. The crew follows a very specific route, and so I was always trying to check according to maps to make sure that the places they went to were basically real, and that the highways they used existed, and that sort of thing.

As I revised, enormous swaths of all that sort of thing were cut because a lot of it was not really essential to showing who the characters were or what the story was about. It wasn’t a survival guide, after all.

For the first few drafts of this book, I was very much an active alcoholic. Ward—the main character—is an alcoholic as well, but I was never truly aware of how much his thinking really correlated mine at the time. I always thought I was sort of taking my regular thoughts and just turning them up to “eleven,” so to speak.

When I started recovery a few years ago, I noticed more and more just how exactly his thinking was completely not self-aware at all (like pretty much any addict), and his general attitudes and pessimism mirrored a lot of mine at that particular time. It’s odd because there’s a lot in there from very early drafts that is about working toward acceptance—that’s Ward’s entire journey, really, in an emotional sense—but being a non-self-aware person I never really picked up on it even though I was the one writing it.

Once upon a time, I would only write after starting a game of Free Cell. I used to also never put anything on top of my notebooks that I would write in—sacrilege! Nothing is more important than my random thoughts!

I think that’s about as weird as I got.

I have to get up every thirty minutes or so to stretch—but that’s just something that writers should be doing regardless if they want to use their hands and shoulders in twenty years.

I’m a bit of both! I find that I can’t really sit down and write without having some sense of direction, and I almost always have some general events laid out. For this particular book, I had some of the major character occurrences thought of before I wrote a single word.

And I like that—knowing what I have to build up to and what needs to make sense. Character creation is of course essential to any piece of fiction, but what draws me to writing fiction is often seeing certain images in my head, and then building backwards and forwards from that. How does that image make sense? Why is that scene happening? That sort of thing.

The image in this case for a large portion of this novel was the character of Ward meeting the character of Dummy (an abandoned young girl) for the first time—and that only happens in the final act of the story, so there was a lot to build up!

Let’s see—a fresh cup of coffee, a bottle of water, a used copy of Robert Heinlein’s Stranger in a Strange Land, my mouse, a half-empty pen, some un-attended crosswords, a wall layered with notes, and a Spider-Man bobblehead.

Not at the moment! I am planning on having another release in the first half of 2014, though I have no idea what it might be right now. I keep thinking it’ll be something with an island prison, maybe something with clones. I have to keep reading and wait for some inspiration.

What do you love about dystopian fiction? 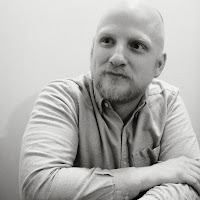 With the world ending around him, Ward flounders for purpose and survival. Resources are gone, disease is rampant, and governments have all but dissolved. The only way off the broken planet is with the Order. Obsessed with technology, the Order is a cult that has developed the means for faster-than-light travel. They claim they can populate the galaxy and save humanity.

Ward joins the Order, inspired by sudden and irrational love for a mysterious beauty named Kansas who saves his life. But quickly, he finds out Kansas and the Order want him to kill adults and kidnap children from across the country. With impressionable youth filling their starships, the Order hopes for their tenets to be spread to all future generations of humanity.

The Order is Ward’s only chance for survival in the wreck the earth has become. Worse than that, those in the Order come to accept him and value his skills for their nightmarish quest across the dystopian landscape of America. But, somewhere inside of him, still, is the strength to strike out on his own and protect whatever good he can find left in the world.

Buy the book at Amazon.
Posted by MJ Thomas at 7:44 AM