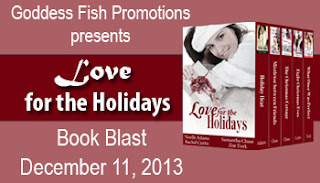 This post is part of a virtual book tour organized by Goddess Fish Promotions. The authors will be awarding a $25 GC to a randomly drawn commenter during the tour. Click on the tour banner to see the other stops on the tour. 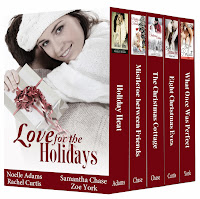 From fake relationships to secret affairs to best friends falling in love, everything changes at Christmas.

HOLIDAY HEAT by Noelle Adams - After being hit with heartbreaking tragedy, Carrie has thrown herself into a hot, secret relationship with Matt. With Christmas approaching, she realizes she might want even more from her sexy, damaged artist, but the boundaries around their relationship make anything deeper than sex impossible. A new, steamy romance.

MISTLETOE BETWEEN FRIENDS by Samantha Chase - Lily and Cam have been friends all their lives, and their relationship has never been romantic. But when they pretend to be dating so they can spend the holiday with their families in peace, they realize their fake romance might actually be real. A new, sweet romance.

THE CHRISTMAS COTTAGE by Samantha Chase - Spending the night trapped by a blizzard in a romantic Christmas cottage with the man she's loved for years has Lacey wondering if fairy tales really do come true. A sweet romance.

EIGHT CHRISTMAS EVES by Rachel Curtis - One Christmas Eve, Cyrus Owen, the over-indulged teenage son of a wealthy businessman, finds ten-year-old Helen on the side of the road. Eleven years later, he is desperately in love with her. This is how it happens... A mostly sweet romance.

WHAT ONCE WAS PERFECT by Zoe York - For Laney, the worst part of returning to her hometown for Christmas is confronting Kyle, the man who broke her heart twelve years ago. When they rediscover their perfect chemistry, Kyle has to convince Laney to let him back into her heart. A steamy romance.

From Holiday Heat by Noelle Adams

“Why is it so hot in December?” she wailed, forcing herself past a faintly tender pull at the sight of his sated eyes and relaxed body.

“Heat wave. Some sort of tropical front. It’s moving up the east coast, from—”

Matt’s lips quirked at her grumpy tone, but he didn’t continue his discourse on the unseasonable December weather.

She shouldn’t enjoy his company so much. She shouldn’t like him. She certainly shouldn’t trust him with her body—or anything else.

There was no future with him. He’d told her the first night they met that a real relationship was impossible for him, and nothing about that had changed.

Being with him wasn’t anything like being with Henry. It didn’t feel safe and familiar, even after three months. She had no delusions about a future with Matt. She never would have had sex with him at all if there had been any possibility of a future.

“Next time, I’ll pick the hotel,” he said, his eyes resting on her with a gaze that was almost soft.

“No, I told you before. When you’re involved in a sleazy affair, then you pick a motel that’s appropriate for the occasion.”

He cocked an eyebrow, obviously amused. “Is that what we’re doing? Having a sleazy affair?”

“Neither one of us is married. I’m not sure ‘affair’ is the correct term.”

“Of course it is. You don’t have to be married to have an affair. It just needs to be secret.” No one knew that Carrie was regularly screwing Matthew Lynch, and she intended to keep it that way.

“I see.” He looked eminently unconvinced. And still amused. And definitely superior.

“Don’t be an ass.” When he opened his mouth to respond, she spoke over him. “You know exactly what ass-like behavior I’m referring to.”

Since that first night, they’d gotten together at least once a week for sex, although recently they’d been getting together more often.

Matt was her hot secret. Her shameless indulgence. Everyone thought she was quiet and withdrawn—keeping to herself, working in her coffee shop, never taking risks. No one would dream she’d have a casual affair with a gorgeous, notorious, wounded artist.

About the Authors:Noelle Adams, Samantha Chase, Rachel Curtis, and Zoe York are four bestselling authors of fun, smart, and contemporary romance, from sweet to sexy, who are collaborating on this holiday anthology.

Starting today, Love for the Holidays will be on sale for just $.99! Buy it at Amazon, Barnes and Noble, or All Romance eBooks.