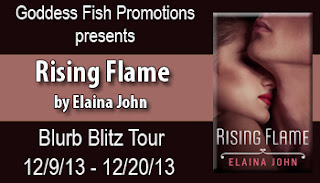 This post is part of a virtual book tour organized by Goddess Fish Promotions. Elaina will be awarding a $20 Amazon or Barnes & Noble gift card to a randomly drawn commenter during the tour. Click on the tour banner to see the other stops on the tour.

Lily Malloy’s life changes forever the night a dark stranger shows up at her door. She soon finds herself growing increasingly attracted to this mysterious man. When Lily is forced to rely on him to find her sister after she goes missing, Lily discovers a secret that could mean life or death.

When Dex’s planet, Jheta, is destroyed, he and his people travel to Earth for a new home. By chance, he stumbles upon fascinating, beautiful Lily. Haunted by the truth of his identity, Dex knows he can never have her. Yet that doesn’t stop his attraction to her. When a threat jeopardizes the lives of Lily and the Jhetans, Dex must fight to protect them, even if it means his own life.


Here's an excerpt to enjoy:

Lily had never been punched before. That didn’t stop her from feeling as if she had. Right in the chest by her very own twin. She did everything for that girl and this was how she repaid her.

Shay practically skipped out the door to her meeting, leaving Lily and Dex alone. At present, they were riding in her car to the store, not saying a word. However, his presence was all too noticeable even though she tried to ignore it. It was like standing next to a fire and pretending she couldn’t feel the warmth.

When they’d first gotten into the car Dex had ran his long, nimble fingers over the dashboard and leather seats. He rolled the window up and down and changed the radio station again and again. It was almost as if he’d never been inside of a car before. Perhaps it was her 370Z that enthralled him. Men liked cars. It still fascinated her though she drove it every day. She and Shay received new cars from their parents for their most recent birthday. The perks of having well off parents.

“Do you have any idea where you’d like to shop?”

He turned his head to look at her, those dark eyes boring into the side of her face like laser beams. “No. I thought I would leave it up to you. I know little of appropriate fashions.”

She snorted. “Yeah, because you prefer to wear nothing at all.”

“I apologize for frightening you last night. It was not my intention to do so. I sought shelter from the rain and your home was the first I saw.”

Yeah, like she believed that. She was far from gullible.

About the Author:Elaina John is an author from Chicago. She began writing after graduating college and discovering she’d rather write books than work in the corporate world.

Along with Rising Flame, the first book of the Jhetan Chronicles, she is also the author of the States Trilogy and a couple short stories.

Buy the book at Amazon or Barnes and Noble.
a Rafflecopter giveaway
Posted by MJ Thomas at 4:00 AM