The Cowboys of Chance Creek by Cora Seton - Spotlight and Giveaway 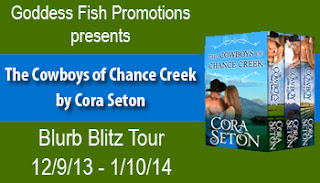 This post is part of a virtual book tour organized by Goddess Fish Promotions. Cora will be awarding a $100 Amazon GC to a randomly drawn commenter during the tour. Make sure you click on the tour banner to see the other stops on the tour--remember, the more you comment, the better your chances. 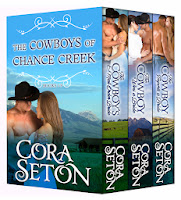 Ethan Cruz, Jamie Lassiter and Rob Matheson have been friends since they were kids, and they’re about to get each other in a whole lot of trouble—women trouble, that is. When a practical joke kicks off a series of romances, the Cowboys of Chance Creek will never be the same.

When Ethan Cruz finds himself with an e-mail order bride he never asked for, he’s ready to send her right back where she came from—just as soon as he gets to know her a little better. When Autumn Leeds answers a plea for a modern mail-order bride for a cowboy, it sounds like the story of the century, but when she reaches Montana, she’s surprised to find Ethan’s the perfect cowboy husband-to-be. Against her better judgment, her plan to keep her handsome groom at arm’s length while she writes a scathing article on the subject disintegrates into a night of passion spent in his arms.

Ethan knows he can’t keep playing this game – he has to come clean with Autumn and tell her the truth; about the practical joke and about the state of his ranch. Autumn’s in bigger trouble than ever. Not only has she fallen in love with the subject of her exposé – she might be carrying his child. Can she trust a man she’s just met when she knows too well that men always let you down?

Can a love based on lies last?

The Cowboy Wins a Bride (Book 2)

All Jamie Lassiter wants is to marry his best friend’s sister and settle down for the rest of his life in Chance Creek. He’s saved his money, bought into the Cruz Guest Ranch and he’s ready for that wedding, but Claire Cruz is nowhere to be found. Claire’s too busy leaving Montana behind to care about cowboys or their wedding plans. She’s got plans of her own – a trip around the world. She’ll go as soon as she buys her tickets and she doesn’t care if she ever sees Chance Creek again.

Desperate to change Claire’s mind, Jamie proposes a bet: give him six weeks to convince her to marry him. If he can’t, he’ll pay for her round-the-world tickets himself. Claire can wait six weeks if it means free tickets and a chance to get a little revenge on a man who once broke her heart. She’s got only one stipulation: Jamie can’t touch or flirt with her – or any other woman – while the bet is on.

Now Jamie’s on the run from a bevy of cowboy-groupie ranch guests, and Claire’s learning she cares about the ranch – and Jamie – more than she dreamed possible.

Maybe it’s time to lose that bet. As long as Jamie loses it first.

The Cowboy Imports a Bride (Book 3)

Rob Matheson doesn’t know how much longer he can keep up the tough-guy act. As his buddies get married one by one, he’s left with the sinking feeling he lost more than his dreams when he traded them for a thick skin. Now Rob’s father has issued a challenge – he’ll give 200 acres to the first of his four sons to wed. Could this be a chance to become the man he really wants to be?

Morgan Tate’s worked for years to climb the ladder to a top job at Cassidy Wineries, but Duncan Cassidy, the boss’ son, always stands in her way. Now he’s issued an ultimatum; marry him or he’ll make sure she never works in the wine industry again..

Rob offers Morgan a proposition – marry him and split the land. Now they’ve got sixty days to fall in love, and a passel of family and friends determined to keep them apart. Will it take the biggest practical joke of all to convince the world – and themselves – that they’re truly meant to be man and wife?

Bella Chatham will lose everything – her veterinary practice, her animal shelter, and even her home – if she can’t find another source of income, fast. So when her best friend signs her up for the hot new reality television show, Can You Beat a Billionaire, Bella accepts the challenge and hopes against hope she can win the ten million dollar prize. If she doesn’t, it’s bye-bye pet clinic and shelter, bye-bye Chance Creek, Montana, and hello to marriage to the billionaire for a year!

Evan Mortimer, billionaire, can’t believe he’s reduced to competing in a television contest to win a wife. Unfortunately, it’s the only foolproof way to secure his position as head of Mortimer Innovations. At least he’ll be able to dump his “spouse” at the end of the year; he’s much too busy to be tied down to a country bumpkin cowgirl.

As the contests heat up, so do the sparks between the contestants. Will either of them remember in time that it’s not who wins or who loses – it’s how they play the game that really counts?

From: The Cowboy Imports a Bride

“I'm going to make this short and sweet.” Holt Matheson stalked into the dining room and hung his cowboy hat on the back of the nearest chair. He braced his hands against the walnut dining room table and looked from one to the other of his grown children, who sat two per side in varying degrees of boredom and irritation. All of them were dusty from the day's work. Usually Holt convened these meetings right after dinner. Today it was barely two in the afternoon—and they'd been summoned inside smack in the middle of their ranching chores.

“I have four sons ranging in age from 28 to 33. Four sons,” he repeated, slapping his hand on the polished surface of the table. “And not one single daughter-in-law or grandchild in sight. What the hell is wrong with all of you?”

Rob Matheson, the youngest of the four, tilted his chair back on two legs and laced his hands behind his neck, exchanging a puzzled glance with his oldest brother, Jake. Normally Holt stuck to tried and true subjects: get up before the sun and don't stop working until it's dark; don't turn your back on an unbroken horse; just because you elect a government doesn't mean it isn't out to get you; and his perennial favorite—take your barn boots off before you enter the house.

Marriage was a new topic at the Matheson table.

“You saying you want us to go knock someone up?” Ned drawled. Rob coughed to cover his laugh. Second eldest, Ned always could get away with baiting their father. If he'd said that, he'd more than likely be flat on the floor by now. As the afternoon sun slanted through the windows, a fly droned somewhere out of sight. It was August, hotter than hell, and as usual his father refused to turn on the air-conditioning.

“I'm saying I'm starting to wonder if you all are batting for the wrong team,” Holt said, straightening up. His rectangular belt buckle, emblazoned with a bald eagle, glinted in the sunlight.

“Holt,” Lisa chided from the opposite end of the table. “Set a good example for the children.” 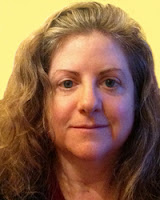 Cora Seton loves cowboys, country life, gardening, bike-riding, and lazing around with a good book. Mother of four, wife to a computer programmer/eco-farmer, she ditched her California lifestyle eight years ago and moved to a remote logging town in northwestern British Columbia.

Like the characters in her novels, Cora enjoys old-fashioned pursuits and modern technology, spending mornings transforming a neglected one-acre lot into a paradise of orchards, berry bushes and market gardens, and afternoons writing the latest Chance Creek romance novel on her iPad mini. Visit www.CoraSeton.com to read about new releases, contests and other cool events! You can also find her on Facebook and Twitter.