When It's Right by Jeanette Grey - Excerpt and Giveaway 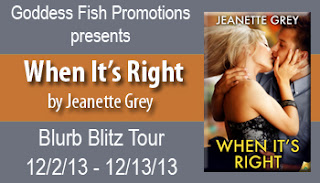 This post is part of a virtual book tour organized by Goddess Fish Promotions. Jeanette will be awarding a $25 gift card to the winner's choice of Amazon.com or BarnesAndNoble.com to a randomly drawn commenter during the tour via the Rafflecopter at the end of this post. Click on the tour banner to see the other stops and for more chances to win.

Still licking his wounds after a messy breakup, Nate is at loose ends for New Year’s Eve and itching for a wild and crazy adventure to jolt him out of his rut. Now if he could only convince his best friend, Cassie, to break away for an impromptu road trip to Times Square.

Fun as it sounds, Cassie is reluctant to accept Nate’s invitation. Little does he know, she’s made resolutions of her own—resolutions about finally getting over her long-standing crush on him. Telling herself this trip will be the perfect “last hurrah”, she packs her bag.

The trip is a fiasco from the outset. A car that won’t start, a freak storm that strands them on the side of the road, and a long drive with too much time for true confessions. Cassie’s rocks Nate to the core, leaving him wondering if the best thing that ever happened to him has been right in front of him all along.

Dropping her bag on the floor, she buried her face in her hands and sank to sit on the edge of that stupid, stupid bed. The corners of her eyes prickled, and her cheeks burned as she stuttered out a shaking, “This is wrong. Everything is so, so wrong.”

The room and his presence, his mocking desire for a new start and a new opportunity for love. The broken wreck of her car and the road spinning out beneath them. The clicking silence of his engine and…and everything.

For too many long, aching moments, there was no sound but for her ragged gasps for air and the lingering echo of how wrong this was. But then there was motion. The gust of wind and the closing of the door, a thud as another bag hit the floor. Footfalls. Nate’s hands on hers and everything about him too close.

Making quiet shushing noises, he peeled her fingers from her face, then curled his hands around hers, holding them between their bodies. He was kneeling on the floor before her, so close she could feel his breath against her lips. His Adam’s apple bobbed as he swallowed.

His eyes blazed, but his hands and voice were so, so soft.

“Cassie. I will go to that office and I will change this room.” He paused, and something in his expression seemed to melt. “But…”

Her heart went cold and hot inside her chest. “But?”

Jeanette Grey started out with degrees in physics and painting, which she dutifully applied to stunted careers in teaching, technical support, and advertising. When none of that panned out, she started writing. In her spare time, Jeanette enjoys making pottery, playing board games, and spending time with her husband and her pet frog. She lives, loves, and writes in upstate New York.

Buy the book at Amazon, Barnes and Noble, or Samhain.
a Rafflecopter giveaway
Posted by MJ Thomas at 4:00 AM