Make Me Crazy by Codi Gary - Q&A and Giveaway

This post is part of a virtual book tour organized by Goddess Fish Promotions. Codi will be awarding a signed copy of Make Me Crazy to a randomly drawn commenter at every stop (US ONLY) during the tour, and a Grand Prize of a $25 Amazon/BN GC plus a signed copy of Make Me Crazy (US ONLY) will be awarded to one randomly drawn commenter during the tour. Click on the tour banner to see the other stops on the tour.

Hi Codi, we want to know about you. Would you tell us some things about you?
I am a major Joss Whedon fan!

As an author, I’m sure you’re also a reader. How much do you read in a year?
Lately I haven’t had a lot of time, but I’m up to three books a month from one every three! LOL

What are your expectations about being an author?
My expectations? Well, I hope to write the kind of books readers go crazy for, and to someday see “best-selling” attached to my name. :-)

Are you hanging out in any social media? Which ones are you using mostly?
I’m usually on Facebook and Twitter most days. When I feel creative, I skip on over to Pinterest and Tumblr.

What is your inspiration source?
Country music, caffeine, and growing up in tiny towns. :-)

I’ve been writing stories on my own since I was a child. What advice would you give new authors like me?
When you have your manuscript spit shined and know what you want to do with it, go for it and put yourself out there. Cause if you don’t try, you’ll never know.

Do you have/have you had another job besides being an author?
I’m a full time mom and I was a Veterinary Technician for 7 years.

What do your family and friends think about you being an author?
They are proud of me. My dream came true and they are very supportive.

Write one sentence about your book(s) and that makes me want to buy your book(s).
I write smexy small town romance with laughs, grand-gestures, and blush-wortymoments. 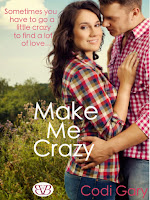 Miranda “Rand” Coleman has seen the way love can wreck a person and wants absolutely no part of it. When her granddaddy dies suddenly, he leaves a clause in his will that has her married in three months or she loses her inheritance. Unwilling to give up the Double C Ranch, she starts to set her eyes towards the eligible men in town, with little luck in finding a man she can stand for a minute let alone a year. Until she sets eyes on the new veterinarian and enlists the help of her womanizing best friend, Jake, to help.

Jake Hansen is a single guy who likes his women pretty and uncomplicated, with no plans to settle down anytime soon. When he decides to help Rand hook her man, he has no idea the effect watching Rand change would have on him. Especially when she starts letting her gorgeous brown hair down and showing off a body he didn’t even know she had. Before too long, Jake isn’t just lusting after his best friend, he’s feeling downright possessive. But when it comes down to the wire, will he get over his issues and step up to the alter…or lose the only woman he was ever meant to love?

Surprising himself, he reached out to brush a piece of hair from her forehead and said sincerely, “There are a ton of men in this town who would be lucky to have someone like you.”

He barely had time to dwell on the softness of her skin before, in true Rand form, she started making gagging noises. “Alright, if we’re done with the touchy feely moment, can I start this movie? Disembowelment I can handle, but this sappy chick talk is nauseating.”

“How is it you can be more of a guy than I am?” he asked, watching her get up and head towards the DVD player, silently cursing himself for his craziness. Whatever weird glitch was going on with him, he needed to nip it in the bud. For a brief moment, he was thinking Red wasn’t so nuts to consider marrying Rand. If she was willing to give her future husband some kind of financial help, as long as he stayed out of her business, why not him? He’d been wanting to buy Loco Tack and Feed for several months, had planned on applying for a loan, but with the money from Rand, he wouldn’t need to deal with the bank.

And it wouldn’t be like it was a real marriage.

“I don’t act like a guy.” Rand said, twisting around after putting the DVD in. “I’m just not one of those prissy girls you and Red seem to think are sooo wonderful.”

Red’s idea about fluffing up Rand’s femininity popped into Jake’s head. “What if you dressed up a bit? Put on some make up? Maybe you’d catch someone’s attention.”

She gave him a dubious look as she sat next to him. “Because I don’t believe in false advertising. Now, hush up. I want to watch this guy get sliced up.”

An obsessive bookworm for twenty years, Codi Gary likes to write sexy small-town contemporary romances with humor, grand gestures, and blush-worthy moments. When she’s not writing, she can be found reading her favorite authors, squealing over her must-watch shows and playing with her children. She lives in Idaho with her family. Visit her website www.CodiGarysBooks.com for latest news, social media, or just to say hi! Facebook: https://www.facebook.com/CodiGarysBooks
Twitter: https://twitter.com/CodiGary
Goodreads: https://www.goodreads.com/author/show/6583366.Codi_Gary

Buy the book at Amazon, iTunes, or Barnes and Noble.