Up the Tower by J.P. Lantern - Giveaway

I love science fiction as a writer because of the possibilities it presents to imagine and create. When you write in a real-world context, I feel like there’s a lot of accountability you have to be aware of. Everything has to make sense with the world as the world is. When you write science fiction, you’re allowed to sidestep some of that and present new ways of looking at common problems through the magic of allegory and metaphor. So a spaceship doesn’t have to be a spaceship, it can be a symbol of escape, or hope, or endless corpocracy, or whatever.

There’s a ton of world-building required for something like UP THE TOWER, and it only takes place in one small part of that world. The whole of the story takes place in one dystopian slum, but for that slum to feel real, I had to think a lot about the world around the slum that would make it not only possible, but necessary. I think most of the best world-building comes about from writers taking one or two premises and then writing about the logical extensions of that, in terms of the world that’s presented.

So, the premise I used was what might happen if the corporate hegemony that controls so much of the world today was just more overt, rather than playing around in the background like it does now. So, if that’s…you know, fifty or sixty or a hundred years from now in the future, you kind of scale what might be possible with technology to that one notion and go to work.

I don’t have many superstitions or quirks, I don’t think. When it’s time to write, I just write. Usually after a little bit of reading to cleanse my palette, so to speak, so that I’m not just pretending to write like myself the whole time.

The only interesting habit I can think of is just that I have to get up every half-hour or so to stretch. I’ve got some terrible pain from a bad neck and a lifetime of being in front of a keyboard and monitor, so I have a ton of little stretching/exercise implements all around my desk.

For me, it’s a bit of both. I come into a story with a general plot, though I don’t really write much down other than some basic buts and therefores. When I’m writing, a lot of little throwaway lines will get tossed down, and then later on I’ll come back to them and have to sit and think about how I might develop them. For example, in UP THE TOWER, when Gary and Ana are walking through the city together before they meet Ore, Ana has a thought about something called, “the water boom.” This was just an off-the-cuff way of describing St. Louis as an area that had some great economic times, and no longer had them. I didn’t really think too much of what it might mean to have a water boom other than that maybe somehow water was responsible for a lot of cheap, easy power in some way. After a while, though, the idea of the water boom happening ended up being pretty central the idea of Junktown as an entity in St. Louis and the nature of the setting of St. Louis as a town owned by the corporation Tri-American.

A box of tissues, a bottle of water and cranberry juice, some blank sticky notes, and the plastic fork I’m about to go eat lunch with.

For the moment, not a lot! I’ve got lots more stops on this fine blog tour, with lots of chances to win a $25 Amazon Gift Card by commenting. But as far as creatively, I’m not working on anything right now other than refilling the old creative well with lots of books. For the next book, I have some vague ideas about space cannibals, but that’s about it.

What makes you want to review a book on Amazon or Goodreads? If you don’t, why not?

Disaster brings everybody together. A cloned corporate assassin; a boy genius and his new robot; a tech-modified gangster with nothing to lose; a beautiful, damaged woman and her unbalanced stalker—these folks couldn't be more different, but somehow they must work together to save their own skin. Stranded in the epicenter of a monumental earthquake in the dystopian slum, Junktown, there is only one way to survive. These unlikely teammates must go...UP THE TOWER.

Before anything else—before the riot, before the flood, before the gap and the deaths and the fires and the pain—before all of that, Ana just wanted to get the hell out of Junktown.

But she was stuck there with Raj, and Raj had all the bodyguards, so she couldn't very well leave on her own. Walk into Junktown without any protection? No, thank you. She had a knife on her, but that was hardly enough. The knife fit neatly in a small, luxury Cardion-brand sheath at her side.

The rest of her outfit was direct out from a fashion magazine. She wore tight black Cardion slacks, her patent leather Aushwere ankle boots sexy and stylish and perfect for inner-city walking. Her dark blue blouse was Cardion again (there had been a sale); already she had noticed the way Raj had been hugging his eyes to how it cupped and clung to her body. He would have been looking a bit more, perhaps, but she wore her favorite Kadaya Sarin-brand leather jacket, allowing her a bit of modesty with the long sleeves and tight collar, despite the thinness of the material. She was a woman dressed to impress, but also was no whore—she had her man. He liked her dressed attractive, but not like some slut. Ana knew what he wanted, because that was her entire life, as she saw it, from now on.

They were inside the ground floor of a tall building. Cleanbots rushed around them, sweeping up dust, guided along by retrofitted eyebots that spied out areas of dust and disrepair.

“Here's where we'll have the lobby,” said Raj, opening his hands out wide to the open space.

Ana had presence of mind to hold her tongue.

What she wanted to say was, “Really, dear? Here in the first possible place that someone could enter from the street? That's where you'll have the lobby? That's so inventive. You're so smart.”

What did she say was, “Oh! It will look beautiful, I'm sure.” 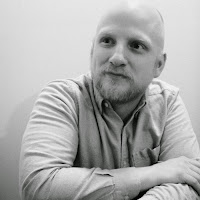 Buy the book at Amazon. a Rafflecopter giveaway
Posted by MJ Thomas at 4:00 AM