Kira: Daughter of the Moon by Beth Trissel - Virtual tour and giveaway!

Beth will be awarding a digital copy of "Through the Fire" to one commenter, a digital copy of "Red Bird's Song" to one commenter and a grand prize of a $25 Amazon GC to one randomly drawn commenter during the tour, so comment today AND follow her tour (if you click on the banner over there on the left, it'll take you to a list of her tour stops)! The more you read and comment, the better your odds of winning. You could be introduced to a great new author AND win a GC!

Logan McCutcheon returns to colonial Virginia after seven years in the hands of Shawnee Indians. But was he really a captive, as everybody thinks? He looks and fights like a warrior, and seems eager to return to those he calls friends and family.

Kira McClure has waited for Logan all those years, passing herself off as odd to keep suitors at bay––and anyone else from getting too close. Now that he's back, he seems to be the only person capable of protecting her from the advances of Josiah Campbell and accusations of witchcraft. And to defend the settlers against a well-organized band of murderous thieves.

Head tilted to one side, he appraised her with a keen eye, approval in his gaze. “The years between us don’t seem to make such a difference now, do they?”

A shiver darted through her. “Not like they once did.”

He ran his fingers lightly over her cheek. “I’ll have to make amends for my past neglect.”

Her chest thudded wildly. “Will you?”

As though she’d issued an invitation, Logan slid closer to her so they were pressed thigh to thigh, nearer than she’d sat to any man. He turned, circling an arm around her waist, and drew her into his hard chest. His low voice a shivery whisper in her ear, he said, “This’ll do for a start.”

Too stunned to speak, she wondered if her galloping heart might give out altogether. This must be a dream. He couldn’t be real. Yet he felt wonderfully solid and smelled of the sun-warmed earth mingled with his own appealing essence, heightening her acute awareness of him. But he was overtaking her with the sudden fury of a gale.

She found her tongue. “I hardly know what to think.”

He didn’t loosen his grip. “Don’t think just yet.” 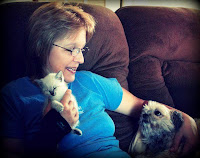 Married to my high school sweetheart, I live on a farm in the Shenandoah Valley of Virginia surrounded by my children, grandbabies, and assorted animals. An avid gardener, my love of herbs and heirloom plants figures into my work. The rich history of Virginia, the Native Americans and the people who journeyed here from far beyond her borders are at the heart of my inspiration. In addition to American settings, I also write historical and time travel romances set in the British Isles. Historical Romance novel Kira, Daughter of the Moon is available in print and eBook from:

Amazon
The Wild Rose Press
NookBook Barnes & Noble
and from other online booksellers.