Bonds of Trust by Lynda Aicher - Virtual tour and giveaway 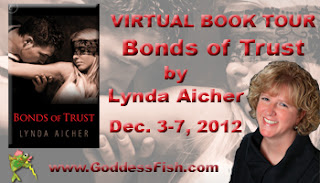 Lynda is giving away a Lynda will award a Grand Opening new member gift box valued at $75 from THE DEN (the club in the series) to one randomly drawn commenter.

Note: This is opened to residents in the US & Canada only, so comment today AND follow her tour (if you click on the banner above, it'll take you to a list of her tour stops)! The more you read and comment, the better your odds of winning. You could be introduced to a great new author AND win a cool prize!

Can you share a little about your current projects with us?

I’m currently working on book 4 in the Wicked Play series, Bonds of Hope. I just turned in book 3 and I’m now heads down on the next deadline. I’m really looking forward to writing this next book. The idea is still building in my mind and I’m getting excited as new a-ha moments keep popping into my head.

What would you say is your interesting writing quirk?

I have to write to music and it has to be with earbuds. I spent years as a consultant and found myself sitting in warehouse, crowded cubical farms or hallways. During that time I taught myself to work to music. I honestly don’t even hear it most of the time, but it seems to kick-in something in my brain that allows me to focus.

Is there a word, phrase or quote you like?

There is. It’s actually one a guy told me way back in high school and I’ve pretty much lived by it ever since. It’s gotten me through lots of tough times and keeps me moving forward.

Never ask why, always ask what.

You can ask why forever and never get an answer. Why did this happen? Why did I do that? Why… But the second you start asking what, you can start moving forward. What did I learn? What am I going to do? What else can I try? What is the catalyst that puts the problem in the past.

Is anything in your book based on real life experiences or purely all imagination?

Bonds of Trust and the Wicked Play world is all imagination. I find it interesting though that a lot of people assume that it’s based on my personal experiences. I think this is true of all authors who write in this genre. For some reason there’s a belief out there that because it’s sex, the author has to do it. People forget that it’s called fiction for a reason.

When you started your book, did you plan on writing it as a series, or did it just grow into one?

Bonds of Trust started out as the first book in a planned series. I have a whole diagram of the condo complex filled with people. I have stories just hanging out there waiting to be told. The fact that the series evolved into books around The Den wasn’t quite so planned. LOL! Originally, it was going to be about the people in the condo complex, but along came these sexy dominants from The Den and look what they did. Took control of the whole dang series before I even realized they’d done it. Ha! So much for plans.

Do you plot your stories or do you just get an idea and run with it?

I definitely have a plan of attack for each story. I don’t plot in detail, but I know my major plot and character turning points and write to those. However, these will almost always change as I start to write. But knowing what I first intended allows me to adjust as I go and still make the story right for the characters.

e-reader all the way! I’ve pretty much been an exclusive ebook reader for over a year. I have three bookshelves full of unread print books that I can’t make myself read. I only buy ebooks too. The last print book I bought was during the Borders closing last year.

After ending her passionless marriage, Cali Reynolds is eager to live out her forbidden fantasies. Her first step is attending new members' night at The Den, the most exclusive sex club in town. Perhaps here she can find a man who understands her desire to be dominated…

At first, Jake McCallister thinks Cali has come to his club for the wrong reasons. But when he discovers she is seeking fulfillment after years of denial, he's intrigued—and takes it upon himself to initiate her into the pleasures she's been missing.

Her first encounter with Jake is everything Cali has always craved, and more; she's not prepared for the feelings he inspires in her. And Jake is just as surprised by his overwhelming attraction to Cali. As their play intensifies, so does their bond. Now, Jake doesn't want anyone but Cali—but is he ready to officially claim her? And will she submit to being his forever?

Inhale, exhale. Two simple, reflexive actions that seemed almost impossible for Cali to execute. Breathe. She had to forcibly remind herself oxygen was necessary. But then, she could hardly hear her own thoughts over the pounding of her heart.

It’d been four days since her final interview. Four days to digest and stew on the fact that she’d been granted membership to the exclusive sex club. She’d be mortified if anyone ever found out she was here. Just the thought of it had her swallowing back her dinner.

They won’t, she reminded herself. She could fulfill this side of her life without anyone knowing.

She forced herself to look around the small room in an attempt to focus on something besides her increasing anxiety. The space was tastefully decorated in deep burgundies and greens. The black leather love seat where she sat was positioned across from two matching chairs. A waiting room that with its warm tones and expensive furniture was more suited for a corporate office than a sex club.

What was she waiting for?

Had the club decided to revoke her membership before she’d even started? Then why did she spend the last half hour listening to all of the rules being repeated to the small group of new members like herself? It didn’t make sense. No one else had been excluded, pulled aside and singled out.

Lynda Aicher has always loved to read. It’s a simple fact that has been true since she discovered the words of Judy Blume at the age of ten. After years of weekly travel as a consultant implementing computer software into global companies, she ended her nomadic lifestyle to raise her two children. Now, her imagination is her only limitation on where she can go and her writing lets her escape from the daily duties of being a mom, wife, chauffer, scheduler, cook, teacher, volunteer, cleaner and mediator. If writing wasn’t a priority, it wouldn’t get done.

To learn more about Lynda, you can find her at: