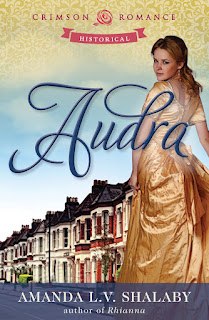 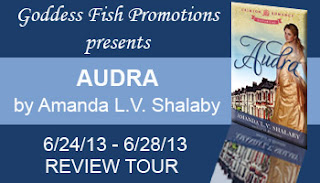 This review is done in conjunction with the author's virtual book tour with Goddess Fish Promotions. Amanda will be awarding a free eBook of her previous novel, Rhianna to a randomly drawn commenter during the tour, so comment here today for your chance to win! Click the tour banner to see the other stops on the tour.

Audra Kingsley, a wealthy heiress, may not have seen much of the world, but she knows exactly how she wants her future to play out - and a coming out ball held at her country estate, Kingsley Manor, would suit her just fine. Her father’s wish that she be presented at St. James in London seems silly since she is to marry her neighbor and childhood sweetheart, Lord Crispin Brighton, but she obliges him.

Audra travels to London with her patroness, the eccentric Lady Sutherland, intending to return home as soon as she has curtseyed to the Queen. Unknown to her, Lady Sutherland is in no rush to leave London before the Season is over and intends to show Audra she has more options in the suitor department than Lord Crispin, a second son.

Audra finds herself surrounded by few friends and is forced to attend parties, balls, and operas - all while becoming the object of a secret admirer’s obsession. As Audra struggles to make her way home to her beloved, plans to compromise her into an unwanted marriage are underway.

Looking for a sweet, touching historical romance?  Audra might be exactly what you need.  Different in many ways, not the least of which is that the hero and heroine are already madly in love and promised to each other ... at least until fate (or an underhanded patroness) steps in.

Audra reluctantly agrees to a brief season, unwilling to leave her home in the country and her beloved Crispin, but she knows certain formalities must be met before she can be wed to him.  When her patroness, Lady Sutherland, decides they will stay in London for the season, and thrusts the unhappy Audra into the whirl of parties and balls, it's clear she has something up her sleeve.

I enjoyed reading this story. While a bit unremarkable, it's enjoyable and well-written.  The main characters are delightful, and it was refreshing to see how devoted they were to each other.  Their love was never in doubt, at least not to us (though Crispin begins to believe Audra may have opted to select a new suitor).  The whirl of the ballrooms, the mores of the times all make for an interesting historical read.  Though not entirely shocking, since the conflict is mentioned in the blurb to the story, it still was an interesting twist.

The author has a strong ability with her words, and that was the main reason I kept turning pages. The characters were well developed, the descriptions crisp and clear. Really, that's what took this story from the mundane to the enjoyable.  I'd happily pick up another story by the author and recommend this to fans of historical romance.

Audra soon discovered that any suggestion of being denied acceptance to Almack’s threw Lady Sutherland into hysterics, and she was forced to keep the vulgar thoughts to herself. Audra, for her part, was already several days into her London excursion, and despite the charms of riding in Hyde Park, the fun of shopping on Bond and Regent Streets, the joys of the operas of Covent Garden, and the pleasurable company of Embeth DeBlock and her mother, she was quite ready to go home. As it was, her coming out ball at Almack’s was the final matter standing between her and Crispin, and Audra easily decided in her heart that, should the six reigning lady patronesses reject her application, she would not be at all disappointed.

On Monday, however, Lady Sutherland was released of her anxiety over the matter. The Countess of Jersey, the Marchioness of Londonderry, Lady Cowper, the Countess of Brownlow, Lady Willoughby D’Eresby, and the Countess of Euston, all of them familiar with Audra’s father, Guilford, Lord Kingsley, embraced Audra with open arms. Lady Sutherland was not a particular favorite of theirs, but since she was a previous member of Almack’s, and a willing subject of ridicule for them, they consented to her presence as Audra’s patroness. Lady Sutherland positively glowed as a voucher for a full subscription was provided to her by Almack’s owner, Mr. Willis.

On Wednesday, Almack’s doors opened at ten o’clock in the evening, and the commotion was unlike anything Audra could have envisioned. Even the most elaborate of Kingsley Manor’s balls that she had watched from afar had not seen the like, as an attendance of over five hundred made their way to the unassuming Palladian building on King’s Street. When Audra had stepped down from her carriage, she caught a brief glimpse of the others lining up behind her, and she started at the hallooing of coachmen and footmen who were doing their best to maintain order and keep the crowds in motion. She had never been surrounded by so many people in all her life, and the excitement that exuded from them was infectious. As she and Lady Sutherland were ushered through the doors, a little thrill found its way through her body.

At eleven o’clock, John Weippert struck up his band on the orchestra balcony of Almack’s large room. At once, the debutantes swirled along the polished, roped-off dance floor, a collective sea of corkscrew curls and braided buns. Girls freshly introduced to society danced the waltz and gallopade with square-shouldered gentleman who twirled their ladies gracefully while sneaking sideways glances at girls prettier than their partners.

The excitement and newness of the experience lasted only a short while for Audra until the flushed faces, the wide smiles, and the eagerness in the expressions of the girls around her struck a sharp chord. Hearts impatient to fall in love filled the crowd, and despite any thrill she had felt upon first entering the establishment, an overwhelming sensation of isolation now came over her. It was so sudden it stopped her breath, and the realization she did not belong sat heavy upon her breast. 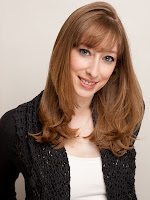 Amanda L. V. Shalaby's passion for all things Jane Austen was inspired by her mother and grandmother. She now writes her own English historical romances, and is the author of Rhianna and Audra.