The Temporary Detective by Joanne Sydney Lessner -- Interview and Giveaway

This post is part of a virtual book tour organized by Goddess Fish Promotions. Joanne will be giving away the following prizes: At each stop, one ebook copy of her novel Pandora's Bottle, inspired by the world's most expensive bottle of wine. A grand prize of a $25 Amazon GC will be awarded to one randomly drawn commenter during the tour. Click on the tour banner to see the other stops on the tour.

I’ve loved mysteries since I first discovered Nancy Drew, thanks to friends of my parents who offloaded their daughter’s extensive collection into my eager hands. From there, I moved on to Agatha Christie, Ngaio Marsh and Dorothy Sayers. I’ve always been a diehard Anglophile, and British mysteries have remained my favorites over the years. (Extra points to writers who include references to Gilbert & Sullivan. Reginald Hill, I’m looking at you!) But I enjoy any mystery that hides its clues in plain sight and offers a solution that is both surprising and inevitable. I’m not sure what ever made me think I was qualified to write mysteries. Maybe I’m not! But I’m reminded of my friend Gail, who’d never waitressed before, telling a potential employer: “But I’ve eaten in many fine restaurants.” There is something to be said for being able to relate to the consumer experience. So I write what I like to read, although I can’t do much about the fact that I’m not English. I also wanted to shine a spotlight on the life of an aspiring actor in New York. Most people have no idea what that day-to-day life is really like. The combination of writing in my favorite genre and opening up that world really appealed to me.

Since I’m using my early years as an actress temping in New York as the background for my series, my world-building is second nature to a certain extent. My research is primarily on the mystery end. What kind of poison kicks in an hour later without leaving obvious signs? Can you tell how long ago a gun was fired? Is the detective who shows up at a murder scene dressed in a suit or a uniform? It’s all mechanics. But that’s the kind of thing you have to get right or it can stop a reader dead in his or her tracks.

Really, truly, do not run off at the mouth when you walk into an audition. You are not nearly as funny or charming as you think you are.

Sometimes I take a break after I write my first sentence of the day. I know I’ve just committed to a scene, and I have to gear up before I dive in and blurt out the rest of it.

Pantser, all the way, which is a little dangerous when you’re crafting a puzzle. But I just read an interview with Gillian Flynn who admitted to working this way. I think Gone Girl is brilliantly plotted, so leaving my own work aside for the moment, it’s clearly possible to write a good mystery this way. Gone Girl also has an element of spontaneity, and that’s one thing that must be hard to manufacture if you’re a plotter. I often have a sense that my characters are telling the story. I’ll find words flowing out of my fingers, and then I sit back and think, “No…really? Well, okay, if that’s what you want to do next!” And then a new avenue of inquiry or plot thread opens up. That said, I do have signposts in mind from the start: set pieces I know I want to include, the murder, a turning point, and a general sense of the ending.

Not what—who: my husband of almost 23 years. He’s a composer and conductor, and his desk is right next to mine. We share the biggest of our three bedrooms as a joint office (much to the irritation of our kids, who share bunk beds in the smallest) and it’s really the nerve center of our home. We spend all day together. He writes music, I write books, and occasionally we write musicals together.

I’m hard at work on the third Isobel Spice novel, And Justice For Some, and I have another, non-Isobel book in progress. We’re also planning a reading of our new musical, The Haunted Hotel, based on a novella by Wilkie Collins. It was commissioned by the Signature Theatre Company in Arlington, Virginia, and if the scheduling works out, we’ll be presenting it there over the summer. I wrote myself a really fun part: the bossy, gossipy sister-in-law in a dysfunctional British family trying to get to the bottom of the mysterious death of their eldest brother. England! Mysteries! There it all is, again. Everything I love, with my husband thrown into the mix.

Should Isobel and James get together?

Think breaking into show business is hard? Try landing a temp job without office skills. That's the challenge facing aspiring actress Isobel Spice when she arrives in New York City, fresh out of college and deficient in PowerPoint. After being rejected by seven temp agencies for her lack of experience, Isobel sweet-talks recruiter James Cooke into letting her cover a last-minute vacancy at a bank. New to his own job, and recently sober, James takes a chance on Isobel, despite his suspicion that she's a trouble-magnet. His misgivings are borne out by lunchtime, when she stumbles across a dead secretary in a bathroom stall. With her fingerprints on the murder weapon, Isobel sets out to prove her innocence by investigating the crime herself. While learning to juggle phone lines and auditions, she discovers an untapped talent for detective work--a qualification few other office temps, let alone actresses, can claim.

“I wouldn’t go back if I thought there were an insane murderer on the loose,” Isobel said. “On the contrary, whoever did this was very sane. Let me tell you, I wanted to kill that woman after three hours.”

For some reason, Delphi asking her point-blank bothered her less than James’s confused hinting. “Of course I didn’t. But I don’t blame you for asking. You hardly know me.”

“It sounds like whoever did it also wanted to humiliate her,” Sunil mused. “I mean, think about it. Captured for all eternity on the pot!”

“Could it have been somebody from outside who came in, waylaid her in the bathroom, pulled the emergency bell and left?” Delphi asked.

Isobel shook her head. “She was such an unpleasant person that it just doesn’t seem random.”

“Then you definitely should not go back there, paycheck or no paycheck,” Delphi said.

“You’re sweet to be so concerned, but I’ll be fine.” Isobel smiled. “It was really nice meeting you both. Good luck with everything.”

“I think you need it more than we do,” Sunil said.

As Isobel rode south on the subway, sardined between a bike messenger in need of deodorant and a young mother juggling twin toddlers, she wondered whether to take her new friends’ advice. No job was worth risking her life. But what about the other people at the bank? They were all continuing to show up for work, weren’t they? They had no choice. They all had jobs to do.

Well, so did she. She needed the money. James didn’t have anything else for her, and even if he did, he might not send her out again. She still hadn’t proven herself, not really.

And that was what she had come to New York to do. Prove herself. 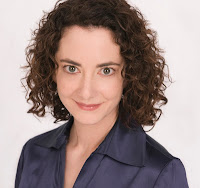 Joanne Sydney Lessner is the author of BloodWrites Award-Winner and Awesome Indies Mystery Pick The Temporary Detective, which introduces Isobel Spice, aspiring actress and resourceful office temp turned amateur sleuth. Isobel’s adventures continue in Bad Publicity. Joanne’s debut novel, Pandora's Bottle (Flint Mine Press), which was inspired by the true story of the world’s most expensive bottle of wine, was named one of the top five books of 2010 by Paperback Dolls. No stranger to the theatrical world, Joanne enjoys an active performing career, and with her husband, composer/conductor Joshua Rosenblum, has co-authored several musicals, including the cult hit Fermat's Last Tango and Einstein's Dreams, based on the celebrated novel by Alan Lightman. Her play, Critical Mass, received its Off Broadway premiere in October 2010 as the winner of the 2009 Heiress Productions Playwriting Competition.

Buy The Temporary Detective in Paperback or for Kindle
Posted by MJ Thomas at 4:00 AM