A Shadow on Merrimack River by Daniela Alibrandi - Review and Giveaway 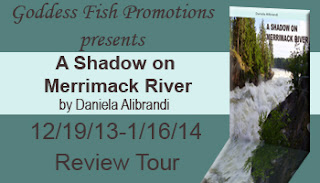 This review is in conjunction with a virtual book tour organized by Goddess Fish Promotions. Daniela will be awarding a $25 Amazon gift card to a randomly drawn commenter during the tour. Click on the tour banner to see the other stops on the tour.

A year in the United States, a fantastic opportunity to forget the events of the past. Then Diana will return to Rome, but if life in the United States will be a positive experience, she will be able to return. And Diana strongly hopes she will come back. In an evening of early spring, however, while with her friend Jenny, an obese girl, she is enjoying to skate on the Merrimack River still frozen, she doesn’t realize she has reached a point where the ice is breaking. In the fierce struggle that she engages with the force of the river waters, that with the beginning of the thaw are moving, Diana understands the plate is too thin, and may not hold up. And below, after hearing a thud, Diana realizes that glides silently a human body, a corpse from which she could be sucked into the river deepness. It’s the beginning of a nightmare in which Diana will live during the months that remain until her departure from what she had considered a quiet and peaceful little town. Until the solution of the mystery which will take place with a breathtaking end.

The events take place in a small town in the Northeast of the United States in the middle 60ties. Many are the descriptions of the places related to the nature and landscapes as well as to the complexity of American society. There is no lack of historical references.

This thriller set in New Hampshire in the 1960s looks at one girl, her family, and the shadows of her life that are revealed. The author has done a wonderful job at portraying American life as seen through the eyes of a visitor to this country and the mystery behind the shadow on the Merrimack River is one that's not easily solved by the reader.

The phrasing was a little hard to understand at times--it's translated into English from Italian, and obviously by someone whose first language is not English. I would suggest that the author look for a translator who is American and is fluent in Italian for her next book, rather than an Italian who is fluent in English. I believe that would help with the ease of reading.

This issue did not reflect on my enjoyment of the book, however, and I look forward to the next book Ms. Alibrandi has for us. 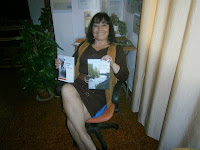 The author Daniela Alibrandi, was born in Rome, Italy while she has lived a meaningful period of her adolescence in the United States of America, where she attended the St. Francis School of Manchester, New Hampshire. Returned to Italy, she ended the classical studies. In her professional life she has experienced different contexts that have enriched her personal baggage. Working in the public sector she dealt, besides, of International Relationships and Cultural Exchanges with the foreign Countries, within the European Union and the Council of Europe, taking care of the Italian edition of some official texts as, for instance, "Illiteracy, a European Comparison", edit by Italian Ministry of Education. Daniela has also completed cultural exchanges and has realized the "Peace Program" with the state of N.Y. In the private life, she is married and has two children.

Always prone to the writing she took part in various literary contests. In 2010 she won the national literary contest Pegaso Flight with the novel "The Bitter Companion", published in the contest harvest edited by the Italian Superior Institute of Health. With the story "Her Light Steps", in January 2011, she reached as finalist the literary contest The Memory. This award, banished by Gutenberg Laboratory and addressed to Italian and foreigner authors, was developed with the patronage of Rome Commune and Libraries, in cooperation with the XI Town hall in Rome, the House of the Memory and the Roman Jewish Community. The story "Her Light steps" is published in the volume "Micol." In December 2010 she published the Book "No Steps On the Snow", Laboratory Gutenberg Editor, a psychological thriller of great emotional impact. This book, soon reaching its first reissue, was inserted in the publishing necklace Over the City. It has been selected by the XVII Town hall of Rome for a literary event in the Roman Summer 2012 and presented in the gardens of S.Angel Castel in the magic of Roman monuments and summer night. "No Steps On the Snow", on July 5th 2013, has won the important literary award Circe, assigned by readers and famous writers and journalists. This book was presented successfully with the patronage of Rome, Santa marinella, Cerveteri, Bracciano and Ladispoli city halls, for its historical and cultural value. The theme treated by the book has been the object of various interviews, among which the one of the important Italian newspaper “Messaggero”, of radio broadcasts and local T.V. telecasts.

In December 2011 Daniela won the national literary prize The City and the Sea, with the short novel "The Last House" awarding a publishing contract with the publishing house Apollo Edizioni. The contest was banished by the Italian Pro Loco Union, patronized by the Ladispoli City Hall, in cooperation with Apollo Edizioni, Etruriain.tv and Centromareradio. The story "The Last House" is published in the volume The City and the Sea, related to the contest.

In June 2012, thanks to the award she won in The City and the Sea contest, Apollo Edizioni published her book "Rachel's Child", successfully presented to the Calabrian Book Fair in Lamezia Terme. The book has aroused much interest in its treated matters and has received good critiques. It was even object of the telecast “Literary Appetizer" 2012 and a broadcast "Everything in an hour" in the summer 2012. It remains memorable, on August 31st 2012, the public conversation with the Facebook readers, organized to speak about the themes treated in the thriller. In less than a few minutes, in fact, more than 100 comments were totaled. Since September 2012, the Italian Magazine Friday’s Nettle has published each month a short novel written by Daniela Alibrandi. The following are the novel successfully published: The Bitter Companion, Her Light Steps, The Last Home, Once Upon a Time There Was a Beautiful Woman, The Reunion, The Kiss of Old Ones, Nobody’s Land, The Epiphany’s True Story, The Mild Wind of April, Those Four Minutes, The Missing Generation. In November 2012 her thriller "A Shade on Merrimack River" has been published at the beginning in the Italian Edition “Un’Ombra sul Fiume Merrimack” as an e-book on Amazon, then in March 2013 it was edited as a hard copy by Youcanprint, to satisfy those readers who wished to have a traditional edition. In August 2013 the book has been published in the English Edition on Amazon. com, .ca, .jp, .uk etc… This thriller is set in Manchester, N.H. in the middle 60ties and threats a delicate matter. Relevant the descriptions of New Hampshire nature. In Italy it has already received good literary critiques and it is the first one of Daniela Alibrandi’s books to be translated into English.

Daniela Alibrandi has a big literary production. Her work particularity concerns the themes treated in her stories, of social relevance, usually set in contemporary historical periods. Italian literary critics have spent many words emphasizing her fluid and involving literary style, as well as her literary work great essence.

Website: www.danielaalibrandi.joomlafree.it
Facebook: https://www.facebook.com/pages/Daniela-Alibrandi-Autore/108488582556510
A page devoted to the English Edition “A Shade on Merrimack River” https://www.facebook.com/pages/A-Shadow-on-Merrimack-iver/1424294097784048
And an email where you can contact her : daniela.alibrandi@gmail.com
She is also on Linkedin and Twitter with her personal profile Daniela Alibrandi
Posted by MJ Thomas at 4:00 AM