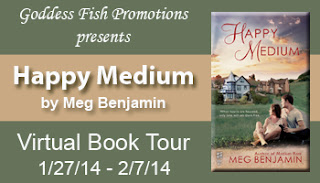 This post is part of a virtual book tour organized by Goddess Fish Promotions. Meg will be awarding the complete Ramos Family Trilogy: Medium Well, Medium Rare, and Happy Medium (all ebooks) to one randomly drawn commenter. Click on the tour banner to see the other stops on the tour.

Actually, I write in two genres—contemporary and paranormal—but they’re related (or at least they are when I do them). I like working in the present because it’s usually easier for me to get inside the characters’ heads. They’re not that far removed from me and I have a pretty good idea how they feel and why. My Ramos Trilogy books (Medium Well, Medium Rare, and Happy Medium) are technically paranormal since they’re ghost stories, but the characters aren’t exotic. They’re “normal” people dropped into extraordinary situations. I can figure out how they think and feel because I can understand how I’d feel in the same circumstances. I love working with people I’d like to know in real life, and for me, that’s pretty much contemporary romance. As for the romance genre in general, I love a good story and an interesting setting, but it’s the relationships between the characters that interest me most—and that’s where romance excels.

For the Ramos Trilogy, I had to read up on ghosts, although I didn’t feel that I had to follow any particular “rules” about the way ghosts behave. One of the nice things about paranormal is that you can push against the boundaries a bit without causing too much trouble. Some of the information I found seemed obvious, like the idea that ghosts appear most frequently at twilight (if the light is making everything indistinct, it follows that you’d be more likely to see something unusual). Some of it wasn’t as obvious, but was interesting, like the way some cultures use iron and salt to repel ghosts. I’m not sure why this is supposed to work, but the claim shows up so frequently that I was willing to buy in. In the end, I found far more information than I ended up using. But just doing the research was fun.

I’m not sure I learned it from Ray, but doing research on historic home renovation (Ray’s job) taught me a heck of a lot about all of the things that can go wrong!

I always write each chapter in my first draft in a separate file, then put them together at the end, so I’m never entirely sure how long the book is until I’m finished. I’m not sure why I started doing it this way, possibly to make it easier to bring chapters to my critique group. But I don’t really want to change it now. Each time I start a new book, I do it in individual chapter files.

I’m a plotter, but I’m not a fanatic about it. I like to have a rough outline of where the plot’s going to go, along with some basic character sketches for the major players. But I never end up following the outline exactly. The characters change as I work with them, and I’ll start having ideas about different things the plot could do and different ways of telling the story. I’ve even changed characters’ names partway through the book and had to go back and redo everything. For me, the outline is a preliminary sketch rather than a blueprint.

A lot of wine! I write in our family room and the wine rack is right beside me. I guess if I ever get totally blocked, I can always grab a bottle or two!

My eighth Konigsburg book, Hungry Heart, will be out from Samhain Publishing in March. It’s all about barbecue, and it features some familiar characters and some newcomers.

I’m always curious about how readers see ghost stories. Some people have suggested to me that ghosts are more mystery/suspense than paranormal. I always considered them paranormal because they weren’t strictly realistic. So what do you think?

Love is good for the soul… unless it’s one that you’re trying to exorcise.

Ray Ramos has a problem–the King William District mansion he and his business partner purchased for a fast renovation needs more work than expected. Ray could use a quick infusion of cash. Enter Emma Shea, assistant to Gabrielle DeVere, the star of American Medium. Gabrielle is looking for San Antonio houses to use for her televised séances, and Ray’s fixer upper seems to fit.

When Gabrielle does a sample séance, Ray and Emma become the target of a touchy ghost with no respect for boundaries. After Ray learns his family has a special affinity for ghosts, the two decide to investigate the haunted house. It doesn’t hurt that Emma is immediately attracted to the laconic Ray or that Ray is intrigued by the buttoned-down beauty who seems determined to hide her considerable assets behind sober business suits. But can the two of them fight off a vengeful succubus bound to the house while getting a lot closer than either of them planned? 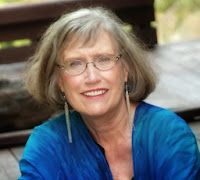 Meg Benjamin is an author of contemporary romance. Her Konigsburg series for Samhain Publishing is set in the Texas Hill Country and her Ramos Family trilogy for Berkley InterMix is set in San Antonio’s King William District. Meg’s books have won numerous awards, including an EPIC Award for Contemporary Romance, a Romantic Times Reviewers’ Choice Award for Indie Press Romance, the Holt Medallion from Virginia Romance Writers and the Beanpot Award from the New England Romance Writers. Meg lives in Colorado with her DH and two rather large Maine coon cats (well, partly Maine Coon anyway). Her Web site is http://www.MegBenjamin.com and her blog is http://megbenj1.wordpress.com/. You can follow her on Facebook (http://www.facebook.com/meg.benjamin1), Pinterest (http://pinterest.com/megbenjamin/), and Twitter (http://twitter.com/megbenj1). Meg loves to hear from readers—contact her at meg@megbenjamin.com. Happy Medium, the third in the Ramos Family trilogy, is available from Amazon and Barnes and Noble.
Posted by MJ Thomas at 10:13 AM