Blaze of Glory by M. Garzon - interview and giveaway 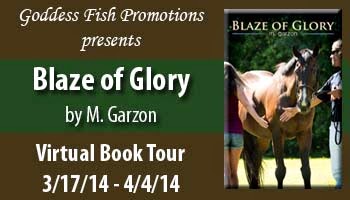 This post is part of a virtual book tour organized by Goddess Fish Promotions. The author will be awarding the entire trilogy on Kindle or Kobo (winner's choice) to a randomly drawn commenter during the tour. Click on the tour banner to see the other stops on the tour.

The author was brave enough to share five things we might not know about her. Check it out and then comment to win her awesome books!

Five things I’ll bet you didn’t know about me:

1) When I wrote my first book, I was shocked that some people objected to the one sex scene. The passage in question involved a girl who’s almost eighteen, in a committed relationship, and using protection, and the description is short and non-graphic. Imagine my surprise when a few Amazon reviewers said they considered this wrong because the character wasn’t married. What?!

I did a quick (and very unscientific) survey, and found that my Canadian friends shared my shock, while my American friends were shocked at my shock. You see, I grew up in Quebec, which I’m told has a more European type of culture than the US does. Whether that’s at the root of it I don’t know, but not having sex outside of marriage is an idea I thought of as a quaint nineteenth-century ideal. To be clear, my extended family is very respectable and in no way considered permissive – quite the opposite. Of my friends, only one or two who were devoutly religious had ever been introduced to the idea of saving sex for marriage, but obviously there were readers out there who shared that view. That cultural differences affect a reader’s experience of my stories was my first big learning experience as an author. The bulk of my book sales are in the US, so I spent considerable time pondering the issue. In the end, though, I didn’t let it change my writing style. I want to write things that I genuinely feel, and if I start editing out of fear of people’s reactions, my writing won’t truly feel like mine anymore.

2) I used to kick butt at Trivial Pursuit (although I haven’t played it in years now). I valued my fact-hoarding brain beyond all reason. In retrospect I think, what good was it, really? Does storing a lot of information make you a better person? More compassionate, more diligent, more patient? In my case, the answer was ‘no’. It did make me, for a short time, feel like I was pretty smart, but life soon showed me the error of that thinking!

3) I attended four different elementary schools and two different high schools, and I finished high school in four years (it’s normally five years here in Quebec: grades 7 through 11). All that moving around meant that I could never form a long-term relationship with any of my peers, and let me tell you, that’s an important skill to acquire. I’ve struggled my entire adult life to figure out how to weather the normal ups and downs of relationships, because as a child I never got to experience them. I’m trying to provide a very stable childhood for my own two kids so that they won’t be faced with the same issue – though I’m sure they’ll come up with some of their own!

4) I love to dance. I’m not saying I’m good at it, and I will likely completely embarrass my kids when they get older, but it’s something I miss from my pre-children days.

5) My mother was raised by Catholic nuns, the biological father I never knew was Muslim, my wonderful adoptive father is Jewish, and, if pressed, I’d call myself a Buddhist. I’m like an entire multicultural nation in one body. I didn’t think much about this as I was growing up; it was just part of me. But as it turns out, a beautiful advantage I gained from it is that few people I meet seem ‘foreign’ to me. I can get to know people based on their personalities, with (I think) little in the way of preconceived notions. I feel lucky that way *G*

"The first book in the popular trilogy, soon to be a major new television series!

Some fires can consume you.

Last year, I had it all. Two jumpers on the show circuit, a lot of wins, and a lot of attention - the good kind. But now I have nothing. My life is circling the drain. The only spark of light that exists for me is my new, forbidden passion. If my stepfather finds out, he will kill me. My twin brother, my only blood relative in the world, has already begged me not to. But I can't help myself. If it can't be horses, it has to be this..."

“What do you need, Tea?” he asked quietly.

The question caught me by surprise. I needed a lot of things, but what sprang to mind first was Jaden. The one thing I definitely could never have.

I gulped. “Just be my friend.”

“I will always be that.” He pulled into the lot where my car was parked. Julia and Teri were following behind us.

He turned to me. “Will you think about what I said? About telling Dec?”

Truthfully, I had filed away his request as soon as he’d made it, under the heading of ‘not in this lifetime’.

“Why is it so important to you?” I asked a question rather than lie to him.

“Because I think it will help to extirpate your feelings of guilt,” he said.

Only Jaden could use a word like ‘extirpate’ and not sound like a total geek, I thought with a smile. I turned toward him, still smiling, and found myself being pulled into a hug. I hugged him back fiercely, my heart breaking into a mad dash. His body was hard, but very warm. I pulled away first—I liked being in his arms far, far too much to stay there. This was something I’d have to get under control, and quickly. 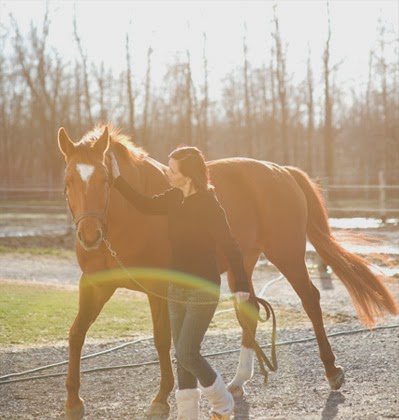 M. Garzon rode horses professionally for ten years, until an injury prompted a career change. She returned to school and completed a BSc; then for good measure, an MBA. After several years of toiling as a business consultant, she turned to writing in a desperate bid to regain her sanity. A mom of two fabulous children, she lives in St Lazare, QC and considers herself extremely lucky to be a writer.