This post is part of a virtual book tour organized by Goddess Fish Promotions. Robin Ray will be awarding a $30 Amazon or Barnes and Noble GC to a randomly drawn winner via rafflecopter during the tour. Click on the tour banner to see the other stops on the tour.

Over the past few years, I’ve released books in several genres. “Tears of A Clown” is horror. “Murder in Rock & Roll Heaven” is mystery/sci-fi. “Stranded in Paradise” is historical fiction. “Commoner the Vagabond” is general fiction about a man with Asperger’s trying his best to navigate through this thing we call life. My upcoming book is called “Obey the Darkness: Horror Stories.” That said, if I was to pinpoint my “main” genre I’d lean towards horror. I find horror easier to write than, say, sci-fi. From an economic standpoint it’s easier to film, too. I suppose I read horror because I like a good scare and, psychologically, it’s a release, as I often liken the monsters to being bad bosses, abusive parents, bullies, thugs, loud people in public libraries, and so on.

As a writer, you have to build a set, sort of as if you were making a film and was employed as the set designer to realize the director’s vision. Of course, as the writer, you are the director. Since you also set the mood, you’re the score creator. The characters have to get dressed by you, so that automatically makes you the clothing designer. You are your own consultant to the script; all the research for your production has to be done by you. For sci-fi, this includes poring though encyclopedias and technical journals online, reading the notes of respected and accomplished scientists, taking a closer look at how infrastructures are created and maintained, and having a basic understanding of how machinery, weapons, vehicles, etc are used. Because “Murder in Rock & Roll Heaven” took place in a whole new world, I had to design the city, angels, clothes, food, jobs,agriculture, etc. One element that was new to me in writing “Murder” was trying to come up with a plant that would serve as their main crop. I thought it’d be a cool idea if one plant was their “manna,” so to speak. After looking at quite a few, I decided on flax because of its many uses. From paint to clothes to bread to soap to linen to medicine, its uses seemed endless. I guess the Romans didn’t call it Linum usitatissimum, or most useful plant, for nothing.

The hero, Det. Gregory Angelicus, is a weisenheimer, a jokester, a clown who does take his job seriously but also likes levity every so often. When faced with the whole new world of Heaven, he could’ve simply succumbed to the uniqueness of it and turned into a slobbering idiot in a psych ward somewhere. He didn’t. Unafraid to ask questions, he pressed on. Consequently, if I learned anything from him, is how to be resilient.

I like to set the mood in action scenes by listening to driving soundtracks; otherwise, I prefer writing in silence. Also, since I tend to get distracted by people where I live in a transitional shelter, I have to write at night when everyone’s asleep, usually 10 pm to 6 am. And, of course, I have to write with internet access to fact check my work; unfortunately, this shelter has a poor wi-fi connection, so the fact checking bit can be a bit difficult sometimes.

Definitely a plotter. I write from an outline. Kudos to those who can write a mystery, horror or sci-fi by just winging it. Maybe in 10 years I might be able to do that.

To my right is a kitchen wall; I write in my kitchen.

My next book is called “Obey the Darkness: Horror Stories.” I actually finished it, or should I say, abandoned it, last week and have already sent queries out to a few publishers. It’d be nice to have it out in time for the Halloween season.

Nope, no question. Just a statement. To wit: Thanks for stopping by It’s Raining Books. I’m glad to be hosted here.

No one ever "re-dies" in Heaven; unfortunately, that’s exactly what happened to singer Amy Winehouse. Her death, an unprecedented event in Heaven's history, has thrown a once docile world into unfortunate chaos. Because of the new uneasy alliance between angels and citizens, a freshly-arrived detective in the rock & roll town has been tasked with investigating the prime suspects, the members of the 27 Club - Jimi Hendrix, Janis Joplin and Jim Morrison. To make matters worse, a powerful angel from one of the upper levels of Heaven will soon arrive to make her ten-year inspection, a task that fills the other angels with dread since she has the power to banish anyone of them to the underworld. So, with time running out, the PI and his newly acquired sidekick, both aided by rock legends such as Eddie Cochran, Mama Cass, Kurt Cobain, Karen Carpenter and others, must quickly uncover the mystery that threatens not only to close Heaven’s doors forever, but promises to send a ripple effect through the entire universe that can rip it apart.

5:15 PM and still no Jim Douglas Morrison. The bearded singer of ‘Five to One’ was keeping his company of three waiting: Gregory pacing back and forth in front of the window, Tony spinning around on a padded, reclining office chair pretending to understand what he was reading from the law book opened in his hands, and the polygraph monitor, Eric Witherspoon, himself a past bassist in a bar band from Nebraska and former student of the angel D’Ariel. Eric, the recent consumer of four slices of 6-cheese pizzas, three stuffed cheesy breads, one piece of chocolate cake and a giant-sized cup of organic, craft brewed root beer, was comfortably sleeping with folded arms in his reclined chair. Completely forgetting he was with company, he twisted to one side, eased off his butt, and made a fart sound so loud and wet he’d better check his drawers, like, immediately. Gregory opened the window to spare himself the pleasure of the cheese-inspired wind. Just then, Jim came staggering into the office, his pants wet from who knows what, his shirt disheveled, and a road sign in his hand. Instinctively, the PI and Tony helped him sit in a chair before he collapsed on the floor.

“Before you fellas start lecturing me,” Jim managed to spit out, albeit slurred, “just know I have a history of being fashionably late.”

“What is this?” Gregory asked, pointing to the road sign as the examiner woke up.

“What?” the confused singer asked then look down and noticed the wooden item.

“Who gave this to me?” he asked, stunned. Nevertheless, he read the sign:

“Anybody want a haircut?” he laughed. Not amused, Gregory wrestled the sign from the singer and placed in on the desk. “Come here and give me some love,” Jim beckoned the small gathering, outstretching his arms for an embrace; when no one accepted his offer, crestfallen, he folded them across his chest. “You guys are chumps,” he groaned. “I want my money back.” 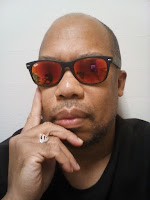 Robin Ray emigrated to the U.S. from Trinidad & Tobago at the ripe old age of 12. Already steeped in the rich culture and mysteries of his native land, it would only be a matter of time before he, too, became a musician and storyteller. After a short stint at Iowa State University, he became a nurse for practical purposes but never abandoned his musical and literary aspirations. Eventually, he did play guitar in several bands, committing himself to localized tours and album releases. Leaving the music world behind, he delved headfirst back into his second love - writing. To date, he has authored six screenplays, two novels, seven novellas, around fifty short stories and many poems. Thus far, he’s published six books - five fiction and one non-fiction, all available in paperback and e-book formats.