When Tasmin's bethrothed, William, is accused of murder, she gathers her wind sprites and rushes to his home town to investigate. She doesn't have a shred of doubt about his innocence. But as she settles in his chocolate shop, she finds more in store than she bargained for. Facing suspicious townsfolk, gossiping neighbors, and William's own family, who all resent her kind - the sorcerer folk from the North -- she must also learn to tell friend from foe, and fast. For the real killer is still on the loose - and he is intent on ruining William's family at all cost.

The Chocolatier's Ghost: Married to her soul mate, the chocolatier William, Tasmin should not have to worry about anything at all. But when her happily ever after is interrupted by the disappearance of the town’s wise woman, she rushes in to investigate. Faced with dangers, dead bodies, and more mysterious disappearances, Tasmin and William must act fast to save their town and themselves – especially when Tasmin starts to be haunted by a most unwelcome ghost from her past…literally.


Read an excerpt from THE CHOCOLATIER'S WIFE:

Time was, in the kingdom of Berengeny, that no one picked their spouses. No one courted—not officially, at any rate—and no one married in a moment’s foolish passion. It was the charge of the town Wise Woman, who would fill her spell bowl with clear, pure water; a little salt; and the essence of roses, and rosemary, and sage. Next, she would prick the finger of the newborn child and let his or her blood drip into the potion. If a face showed in the waters, then it was known that the best possible mate (they never said true love, for that was the stuff of foolish fancy) had been born, and the Wise Woman could then tell where the future spouse lived, and arrangements were made.

For the parents of William of the House of Almsley, this process would turn out to be less than pleasant.

The first year that the baby William’s finger was pricked and nothing showed, the Wise Woman said, “Fear not, a wife is often younger than the husband.”

The second, third, and even fifth year she said much the same.

But you see, since the spell was meant to choose the best match—not the true love—of the heart the blood in the bowl belonged to, this did not mean, as years passed, that the boy was special. It meant that he would be impossible to live with.

On his seventh birthday, it seemed everyone had quite forgotten all about visiting the Wise Woman until William, who knew this of long habit to be a major part of his day--along with cake, a new toy, and a new set of clothes--tugged on his mother’s skirt and asked when they were going. She stared at him a long moment, tea cup in hand, before sighing and calling for the carriage. She didn’t even bother to change into formal clothes this time, and the Wise Woman seemed surprised to see them at all. “Well, we might as well try while you’re here,” she said, her voice obviously doubtful.

William obediently held out the ring finger on his left hand and watched as the blood dripped into the bowl. “She has dark brown eyes,” William observed, “and some hair already.” He shrugged, and looked at the two women. “I suppose she’ll do. I’m just glad ‘tis over, and that I can go on with my life.”

“For you, perhaps,” his mother said, thinking of what she would now have to accomplish.

“Do not fret, mother, I shall write a letter to the little girl. Not that she can read it, anyway.” He petted his mother’s arm. He was a sweet boy, but he was always charging forward, never worrying about feelings.

The Wise Woman rolled out an elegantly painted silk map of the kingdom and all its regions, his mother smoothed the fabric across the table, and then the Wise Woman dipped a brass weight into the bowl. Henriette, William’s mother, placed her hands on William’s shoulders as the Wise Woman held the weight, suspended, over the map.

Henriette held her breath, waiting to see where it would land. Andrew, her younger son, had his intended living just down the street, which was quite convenient. At least they knew what they were getting into immediately.

The plumb-bob made huge circles around the map, spinning and spinning as the Wise Woman recited the words over and over. It stopped, stiffly pointing toward the North.

“Tarnia? Not possible, nor even probable. You must try again!”

For once, William’s mother wasn’t being stubbornly demanding. Tarnia, a place of cruel and wild magic, was the last place from whence one would wish a bride. They did not have Wise Women there, for anyone could perform spells. The Hags of the North ate their dead and sent the harsh winter wind to ravage the crops of the people of the South. Five hundred years ago, the North and the South had fought a bitter war over a cause no one could quite remember, only that it had been a brutal thing, and that many had died, and it led to the South losing most of its magic. Though the war was long over and the two supposedly united again, memory lingered. “I have cast it twice.” The Wise Woman chewed her lower lip, but therewas naught else she could do.

“Not Tarnia, please?” Henriette, usually a rather fierce and cold woman, begged.

“I am afraid so.” The Wise Woman began cleaning up; her shoulders set a little lower. “I am sorry.”

William, staring out the window at the children playing outside, couldn’t care less. What did it matter where anyone was from? She was a baby, and babies didn’t cause that much trouble.

“Only you, William,” his mother said, shaking her head. “Why can you not do anything normal?”

This was to be the tenor of most of their conversations throughout their lives. 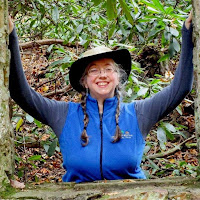 Cindy Lynn Speer has been writing since she was 13. She has Blue Moon and Unbalanced published by Zumaya. Her other works, including The Chocolatier’s Wife (recently out in an illustrated hardcover to celebrate its 10th anniversary) and the Chocolatier’s Ghost, as well as the short story anthology Wishes and Sorrows. When she is not writing she is either practicing historical swordsmanship, sewing, or pretending she can garden. She also loves road trips and seeing nature. Her secret side hobby is to write really boring bios about herself.