One Too by Sherrie Cronin

This post is part of a virtual book tour organized by Goddess Fish Promotions. Sherrie will be awarding a $25 Amazon or B/N GC to a randomly drawn winner via rafflecopter during the tour. Click on the tour banner to see the other stops on the tour.

Telepathy creates as many problems as it solves, as most of the members of the secret organization x0 would admit. When new member Lola discovers another group of telepaths with a completely different approach, those problems multiply at the speed of thought.

Soon, Lola’s family and friends are in danger. Lucky for her, she’s not your average budding psychic. Each person with whom she is close has a special gift of their own. That’s good, because it’s going to take every power they possess to keep this other group from succeeding with their plan to eradicate x0.

They all turned as a motion caught their eyes outside of the window. A blur of something vaguely human-sized popped out of the bushes, exploded over to the tray, paused a fraction of a second and almost became visible in the mist, and then burst back again into the shrubs. All eyes turned to the tray, where the furry orange body of the cat was gone.

The hooded figures began jumping around in jubilation, chanting words of thanks to the Zeitman family for accepting their offering. Lola got the clear impression that the entire performance was scripted and rehearsed. She was certain of it once she saw the reporter and cameraman on the other side of the fog.

“I think we might have played right into their hands,” Maurice echoed her thoughts.

“Ariel said we almost certainly would, no matter how,” Nell said. “She was sound asleep when I left the room.”

“Well, she can sleep through anything,” Teddie said. “Who grabbed the cat?”

“I did,” Xuha called to them from the kitchen. Everyone started to move toward his voice and they found Xuha sitting in a kitchen chair petting the neighbor’s groggy pet. “I was watching from upstairs and I thought, I can’t let this little guy die. I figured that I could move so fast that no one would see me.”

“You did, but it doesn’t matter,” Lola said. “Xuha, they got footage of a cat disappearing into thin air at our house. That’s plenty.”

“Even I couldn’t sleep through this racket,” Ariel said, coming into the kitchen. “Don’t worry about it, Xuha. If you hadn’t saved the cat then somebody else here would have, and it all pretty much ends the same way.”

Xuha gave Ariel a wary look. “Did I make things worse? For myself? For the rest of you?”

She shook her head. “Look, I’ve got a personal aversion to middle-of-the-night fortune-telling. Let’s get some sleep. Please.”

Lola poured a tiny bit of milk out for the cat, while Alex opened the front door. The costumed crew had vanished, as had anyone recording or reporting on their presence. The last bits of dry ice were disappearing, giving off tiny puffs of mist as they did. The cul-de-sac was silent, and the stars sparkled in the night sky.

Alex shrugged. “Some years you get Santa, and others you get ‘what the hell was that?’”

He held the door open as the fluffy orange cat licked up the last bit of milk then puffed his tail up straight and walked back out into the night. 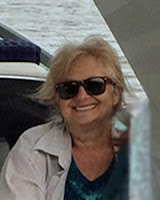 Sherrie grew up in Western Kansas thinking that there was no place in the universe more fascinating than outer space. After her mother vetoed astronaut as a career ambition, she went on to study journalism and physics in hopes of becoming a science writer.

She published her first science fiction short story long ago, and then waited a lot of tables while she looked for inspiration for the next story. When it finally came, it declared to her that it had to be whole book, nothing less. One night, while digesting this disturbing piece of news, she drank way too many shots of ouzo with her boyfriend. She woke up thirty-one years later demanding to know what was going on.

The boyfriend, who she had apparently long since married, asked her to calm down and explained that in a fit of practicality she had gone back to school and gotten a degree in geophysics and had spent the last 28 years interpreting seismic data in the oil industry. The good news, according to Mr. Cronin, was that she had found it at least mildly entertaining and ridiculously well-paying The bad news was that the two of them had still managed to spend almost all of the money.

Apparently she was now Mrs. Cronin, and the further good news was that they had produced three wonderful children whom they loved dearly, even though to be honest that is where a lot of the money had gone. Even better news was that Mr. Cronin turned out to be a warm-hearted, encouraging sort who was happy to see her awake and ready to write. "It's about time," were his exact words.

Sherrie Cronin discovered that over the ensuing decades Sally Ride had already managed to become the first woman in space and apparently had done a fine job of it. No one, however, had written the book that had been in Sherrie's head for decades. The only problem was, the book informed her sternly that it had now grown into a six book collection. Sherrie decided that she better start writing it before it got any longer. She's been wide awake ever since, and writing away.

The book is available for pre-order for $2.99 at Amazon, Barnes and Noble, or Kobo.