The White Lady by Beth Trissel

This post is part of a virtual book tour organized by Goddess Fish Promotions. Beth Trissel will be awarding a $20 Amazon or Barnes and Noble GC to a randomly drawn winner via rafflecopter during the tour. Click on the tour banner to see the other stops on the tour.

Avery Dunham has always been ready to follow her friend, time-traveling wizard, Ignus Burke, on incredible adventures. This time, though, she has serious misgivings. It's just one week before Christmas, but she cannot get him to change his mind. The usually cool and collected magic-wielding leader is wholly obsessed by the portrait of the White Lady whom he is bent on rescuing.

Almost as soon as they begin their journey, it becomes clear their mission is a trap.

Avery was right: this adventure is not going to be like any other.

What had Mrs. Burke said about the smell of black magic? An acrid scent clung to the portrait. Avery could practically taste the bitterness on her tongue, and she’d scarfed the last dollop of Guy’s chocolate mousse. The chocolaty sweetness should linger, not this fetid whiff from the fumes of Mordor.

A slight exaggeration, perhaps, but the disagreeable odor went beyond the mustiness associated with the age of some things, mostly old books. And this was no antiquated leather-bound volume. Paintings didn’t generally reek. Had she grown more sensitive to the smell, or was the proximity of the portrait the reason she was affected? Or something far more ominous…

When/if they returned from this journey, she planned to toss her Highness into the fire, unless Mrs. Burke still objected to destroying the painting. Ignus was too entranced for a reasonable discussion. It was like Invasion of the Body Snatchers with him. Not entirely. He wasn’t deranged, but not himself.

Maybe if she hadn’t known him before his bewitchment, she wouldn’t be as aware of the alteration in his personality. He used to be a lot more fun.

She sought Stan’s reassuring presence. His hair might change color, and he didn’t need the glasses he wore to enhance his geekiness, but he remained steady.

“Here goes nothing, or freakin’ everything,” she said.

He eyed her from beneath his brown bowler. “Something, for sure. Whatever you do, for God’s sake, don’t blink.”

Her jaw dropped. “Not the Weeping Angels again? Are you thinking what I am?”

A smile twitched at his lips. “Great minds.”

“Don’t go there. Nothing could be worse than them.”

All humor faded from his face. “Never say never.” 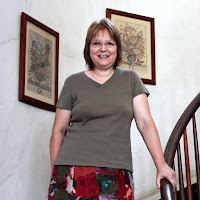 Married to my high school sweetheart, I live on a farm in the Shenandoah Valley of Virginia with my people and furbabies. An avid gardener, I grow herbs and heirloom flowers and use them in my stories. The rich history of Virginia, the Native Americans, and the Scots-Irish are at the heart of my inspiration. My English/Scots-Irish ancestors were among the earliest settlers in America. I write historical romance set in the colonial frontier (The Native American Warrior Series), and the American Revolution (The Traitor's Legacy Series), colonial American Christmas romance (A Warrior for Christmas) Georgian England romance (Into the Lion's Heart, the time and place of Poldark). Some of my historicals have ghosts and paranormal in them. I also write Young Adult shapeshifter, fantasy romance (The Secret Warrior Series), and New Adult paranormal time travel, time slip romance to the Scottish Highlands, the American Revolution, the Civil War, WW1.. (My Somewhere in Time and Ladies in Time Series.)

The White Lady is available in Kindle at: https://www.amazon.com/White-Lady-Ladies-Time-Book-ebook/dp/B075XBTY1J and in eBook from all major online booksellers.