This post is part of a virtual book tour organized by Goddess Fish Promotions. David Beem will be awarding a $25 Amazon or B/N GC to a randomly drawn winner via rafflecopter during the tour. Click on the tour banner to see the other stops on the tour. 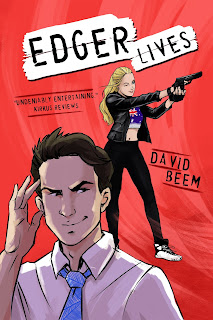 Our dork of destiny rides again!

Edger is falling for Mary, his bodyguard, kick-ass spy, and cover wife. But she’s so hopelessly out of his league, it’s clear someone’s going to get hurt. Less clear? That someone may be the Prime Minister of Australia.

When Mary confesses her desire to kill the world leader whose assassination Edger’s supposed to prevent, Edger’s superpowers pick the worst time to stop working. Without a fully functional psychic superhero, their team of spies can no longer order him to probe Mary’s mind for ill intent. The stage is set for a confrontation that threatens to strip a defenseless Edger of his loyal protector just when he needs her most.

Return to the Collective Unconscious, this time with Listerine-chugging stoners, Hollyweirdos, commie-alien-kung fu robots, one space gorilla-unicorn, and an exceedingly lovesick Vladimir Putin.

Mind your fingers and toes on page 270. Those skydiving mind-control monkeys have been known to bite!

Google the Cessna 208B Grand Caravan and you’ll learn this single-engine turbine-powered plane is among the most popular jump aircrafts in the world. The Grand Caravan model, with its 675 horsepower, has a good climb and typically seats nine passengers plus the pilot, but with the FAR Part 23 waiver, the number of passengers tops out at fourteen. The wingspan is fifty-two feet. A full tank of fuel gets you a range of 1,232 miles. The cruise speed is 214 mph. All this is Googleable. Less Googleable: the Cessna 208B Grand Caravan is exceedingly popular with the Russian skydiving mind-control chimp crowd.

These adventure-seeking chimps love the Cessna 208B Grand Caravan for its high wing and large exit door. They love to jump up and down in the back and fling poo while shrieking at the tops of their lungs. Most of all, they love the complimentary Chiquita bananas.

This group of mind-control chimps, like the others flying over northern Indiana, are wearing yellow-and-purple spandex onesies and Q-32 Thinking Caps replete with fancy blinking lights and telescoping antennas. They are well-mannered monkeys, despite their predilection for flinging poo, who’ve been taught it’s poor form to arrive at a party without a gift. For this reason, they have brought some five hundred pendant medallions between them, medallions identical to the ones adopted as the symbol of the Church of the Ladder Day Dudes.

The squadron of Cessnas banks two miles above sleepy South Bend, Indiana, in preparation for its pass over the Notre Dame campus.

About the Author: David Beem loves superhero movies, taekwondo, and flossing. He lives in Djibouti with his family and crippling self-doubt. To help actualize David’s inner confidence, visit his website and buy all the stuff: http://www.davidbeem.com