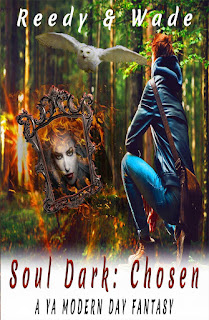 War is coming between Lukas’ Goddess and an ancient Demon Lord. But the death of his parents shakes his faith, and with the loss of his remaining family it is shattered. Blinded by rage, Lukas turns away from his friends and trains under a deceptive, yet formidable master to hone his magic and prevent the demon’s final objective--obliteration of all life on earth.

War begins! A forged weapon, Lukas rejoins his friends and sets after the Demon King. From a hidden crypt, where evil lies waiting, to the Iowa countryside, they battle to prevent the end of all they know. Lukas must overcome his doubts and allow the Light to work through him--to defeat both the foe of his Goddess and a new more familiar one.

Soul Dark: Chosen is a coming of age tale in the modern-day world when a war between ancient deities and demons culminates in a winner-takes-all battle that could determine the fate of all mankind.

Read an Excerpt That night, that moment, Lukas regarded the same jeweled black sky as he warmed his numb fingers over an overloaded burn barrel, beside the massive red barn on Theo’s homestead. He heard the angelic voice of someone he missed whisper his name as if she were right there beside him. “Sabine?” He asked, glancing every which way. He could feel her. Her breathing. Her weeping. And he could even taste the salt of her tears.

Movement at the outer edges of his psychic awareness drew him back into his lesson of the night just as a cluster of small boulders flew toward him; with a thought and a nod of his head, he hurled them back the way they had come.

Doctor Theo entered the light of the enclosed fire, leaving the shadows whence he had hidden to watch his protégé. “At last you show some semblance of awareness,” he said. He studied Lukas for a moment before smiling. “Beware distractions—however delicious they may seem. They can lead to your undoing.” He gestured toward the glowing barrel. “Now put your hand in the fire. Will away the flames.” His look was a dare wrapped up in the cloak of a command.

Lukas took a half-step back—he had learned much from the old man, but he was not crazy—not yet, anyway.

“Quit playing the fool,” Theo snarled, all signs of pleasantry gone. “Do it!”

Following a compulsion, he could not resist, Lukas put his hand into the fire, and imagined the flames flowing around it, which for a time, they did.

Theo raised his brow in surprise. “There may be hope for you yet.”

The heat and the natural fear of fire within all mortal beings betrayed him, however, and he whipped his hand back, blowing on two fingers, which swelled with burn blisters. He stepped clear of the barrel—embarrassed at yet another in a long string of failures—he could seem to do nothing right, nothing to please the ever-judging old man.

“Even I make mistakes,” Doctor Theo said, shaking his head in disappointment. He raised a single finger and gestured toward the barrel—the power of his will burst the metal apart and spread the burning wood within in a large circle. With a second gesture the fire roared up, reaching high above them. He stepped unharmed and without hesitation into the heart of the flames, where he paused, turned about, and looked Lukas in the eyes. “This is awareness, Lukas—this is control. Without them your battle with Belial will end before it even begins. And make no mistake—your war is coming.”

He regarded his teacher with a newfound sense of respect, which also bordered an ongoing nagging feeling that something was off about the old man. “I’m afraid,” he said, the only words he could muster.

Doctor Theo’s eyes shimmered red through his sunglasses for a moment, even after he extinguished the fire with a thought. “Then you will fail,” he said, marching away. He glanced back. “And everything and everyone you know and love in this world will burn. I remember what you told me about your parents and how they died. Your grandparents. Your brother. How many more will you let suffer and die? How much more can your conscience handle?”

About the Author: E. L. Reedy was born and raised in Iowa, where he devoured tomes of fantasy, sci-fi, and young adult novels as a child. In his free time, he is an avid gamer (D&D and Pathfinder). He has traveled the world as a soldier in the U.S. Army, and now lives in Iowa, where with his writing partner, he continues to pen works in the realms of Fantasy and Horror in the Young Adult Universe.

A. M. Wade was born the only girl in a family with five boys, she readily escaped into fantasy, sci-fi, and other fiction novels. Having traveled through most of the US, she enjoys using scenery and characteristics of the different states in the story adventures she created for the little ones in her family. Now, she writes sci-fi, fantasy and horror with a lifelong co-conspirator.

Together: Having lost many friends, associates, and even children from our home town over the years to suicide, they wrote their first novel, Upon Broken Wings. Told from the point-of-view of a young witness, the story teaches that suicide is not an end to suffering, but rather the beginning of unimaginable pain for those left behind and that there is always hope if we choose the path of life.