The Black Hand by Jonathan Dunne

This post is part of a virtual book tour organized by Goddess Fish Promotions. Jonathan Dunne will be awarding a $20 Amazon or Barnes and Noble GC to a randomly drawn winner via rafflecopter during the tour. Click on the tour banner to see the other stops on the tour.

Welcome to It's Raining Books. Why do you write in your genre?

Crime is an enthralling subject. There are crimes which appall us, crimes that intrigue us, and the crimes we admire. Who doesn’t love a rogue? My genre is a well with no bottom. We will always be fascinated by the people who step outside the laws of society. Crime in all its forms, simply captivates the public imagination.

Even when I didn’t write crime - I wrote crime. I began with Fantasy (Lord of the Rings. Not the other kind!) yet crime was always interwoven into my novels. Tough areas in Dublin have colorful characters. Where I grew up we were spoon-fed stories of old crooks and criminals. I posses gold from those days and I use it as material for my novels.

It’s a grind when you research a book. Good contacts will help but a large amount of it involves reading, watching documentaries and pursuing archived stories. For a new book, I spent a week in Spain researching how to crack a safe. My google searches are mainly guns, drugs, DNA, forensic science and a whole host of terrifying subjects!

You cannot frighten the person who is prepared for death.

Yes. When the world is quiet, I write. I can only begin writing in the EARLY morning hours. My mind is fresh and I’m in step with my emotions. I believe every day provides a blank canvass full of possibility. The illusive flow, every writer pursues, flows my way at the start of every day.

Used to be a pantser! But how can you write about organized crime without a master plan? Today, I’m a plotter.

The Florist. My first time writing in the first person. It’s a tale of crime, deep deception, and the consequences of persecution…and…of course… Flowers.

Do you something you want to say to our readers?

Yes. The greatest gift you can give an aspiring writer is your time. Please fill that 60 seconds with a review. It is the fuel that keeps the fire burning. And we could all do with more light in the world. 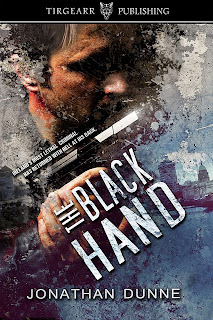 In the aftermath of Ireland’s most deadly gang war, Dublin’s ruling family has scattered to the wind.

Into the void steps a criminal genius known only as The Black Hand. His organisation’s powerful grip is ruthless, bloody and barbaric.

With Europe’s biggest crime in play, The Devil needs a distraction. And The Black Hand needs Jacob Boylan to return to Irish shores. He will stop at nothing to provoke Dublin’s most lethal criminal out of hiding.

But has the wily genius misstepped? As all eyes are on Jacob, the Dublin exile carefully plans a gangland wipeout, for he is nobody’s pawn.

Essex had the unique capability of keeping London at bay. Many of London’s middle classes wanted a respite from the hustle of their working lives, and Essex with its sprawling coastline and quaint villages was the perfect retreat. The train station at Basildon added to the attraction for London’s blue-collar workers. Over seventy percent of Essex was rural, which suited Jacob. He disappeared into respectability and showed no appetite to leave anytime soon.

Jacob Boylan was thirty-seven years old. He was a little less than six feet tall, with dirty blond hair, and dark green eyes. He had a small scar on his chin, just above a deep purple birthmark. His knuckles were badly callused, and his hands were criss-crossed with ugly scars. Jacob retained a good bulk of his weight and carried it in the right proportions.

He’d arrived in Essex two years ago after a hasty robbery. It was a period of overdue sobriety. There were no supports, no interventions, and no friends who plucked him from the gutter. He’d simply reached a decision. The pain was no longer numbed with alcohol, so he decided to cope without it. If he was to suffer, he would do so in relative comfort.

For close to two years, Jacob had begged on the streets and survived on the generosity of soup kitchens. Intermittently, he encountered volunteers who patrolled the pavements with a hot meal and a warm smile.

It had been five years since Jacob had lost his daughter in a gun attack in Dublin. An attack that was meant for him. They missed. But they didn’t. Jacob fell away as the world crumbled under his feet. Revenge had been exacted, but the hole in his heart was too big to fill. Jacob drank himself into oblivion. After four suicide attempts, he could no longer cope with the pain in his wife’s eyes. He left Dublin and embraced the despair of London’s destitute.

Jack Daniels had a way of numbing the pain. The Tennessee whiskey erased the images that haunted him. But, of late, his daughter had begun to invade his dreams. He could see and touch the blood-matted blonde hair. Hannah was stern. He felt her hand on his cheek and wanted to die. Living was too hard. And they spoke.

I need to be with you.

Stay with me, he begged.

Always, she replied. Give me Daddy back…monster!

Jonathan Dunne is a native of Dublin's north inner city. The Black Hand is his second novel in the crime genre. The Takeover - his first crime novel went on to wide acclaim and regularly featured in Amazon's bestseller lists.

He is also an avid MMA journalist who has penned articles for some of Ireland's biggest publications. He holds a Degree from the Dublin Institute of Technology and is a strong advocate of lifelong learning and education. After returning to complete his leaving certificate as an adult in Jonathan has went on to have four novels published.