This post is part of a virtual book tour organized by Goddess Fish Promotions. Kavitha Yaga Buggana will be awarding a $25 Amazon or B/N GC to a randomly drawn winner via rafflecopter during the tour. Click on the tour banner to see the other stops on the tour.


Five Things You Might Not Know About Kavitha Yaga Buggana

- When I was a young girl, I wrote short stories and poems. A couple of short stories were published in my school magazine, but my poems were my hidden secrets - I hated sharing them with the world. One day, I showed them to my parents. My proud father submitted them to a small local newsletter. Some were published. He thought I’d be delighted and encouraged. I was furious. I tore the newsletter and all my notebooks with all my work and swore I’d never write again. Of course, that was teenage drama and I did write afterwards. But I didn’t submitted my work to publications till many years later.

- I never thought I’d be a professional writer. I had Undergraduate and Graduate degrees in Computer Science and worked as a software developer for many years in the Chicago-area in cellular network optimization software. After I was pregnant with my second kid, I quit working and I never went back.

- In an airport, I picked up, ‘Banker to the Poor’ a book based on the work of Mohammed Yunus the founder of Grameen Bank in Bangladesh. He was the innovator of microcredit (small loans to poor people to pull themselves out of poverty). Deeply impressed with his work and his approach to poverty alleviation – helping people help themselves - I wrote an essay on Grameen Bank. It was published in 2002 in Skipping Stones Magazine. It was my first published piece (other than those published in school magazines and the newsletter). Unlike the first time, I was thrilled – I was walking on air for days afterwards.

- In 2004, my husband and I moved back to India to be closer to family. Still inspired by the work of Yunnus, I applied for an MPhil program in Developmental Economics offered by a local research organization. This program was unique as it did not require any degrees in Economics (which I did not have), though candidates had to pass an entrance exam and interview. For months, I taught myself Undergraduate and Graduate level economics. My father is a prominent economist, so he helped whenever he could. To everyone’s surprise, including my own, I passed the exam and interview.

- As a part of my research work, I spent weeks in small villages and hamlets in rural South India. It was one of the most remarkable experiences of my life. I went to small straw huts and little cement houses and through parched lands where every drop of water was as precious as gold. Crippling poverty and illiteracy were the norm. Poverty meant not just dehumanizing conditions, but also choices that no one should have to make. They had to decide whether to feed their young children or their old parents because they could not feed both; they had to decide which child to take to the hospital because they could not afford to take more than one. A small accident which meant medical bills and days lost from work all of which could push them into a generation-long poverty trap. Yet, people in those villages were always friendly, curious and shared with me not just stories of their poverty, but also stories about the small joys in their lives. Everywhere I went, their sense of hospitality was so strong, they would offer me something to eat or drink, even though that might mean they might have less to eat or drink that night. It was a difficult yet moving experience.

- I completed my MPhil thesis. I realized that Phd. and research was not for me. My MPhil research was on financial literacy and I had to restrict my work to that narrow scope. But the lives of the people in those villages were so complex, with the restrictions of research, I could never get to the whole truth of their lives.

- Writing, I thought, would allow me to explore the world with the blinkers off. That’s what I try to bring to my writing - a constant search for the truth, the essence of things. 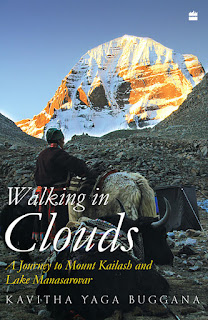 Will we make it?

That's the question Kavitha and her cousin, Pallu, ask themselves as they trek through Himalayan pine forests and unforgiving mountains in Nepal and Tibet. Their goal: to reach Mount Kailash and Lake Manasarovar.

The two women walk to ancient monasteries, meditate on freezing slopes, dance on the foothills of Kailash, and confront death in the thin mountain air. In Kailash and Manasarovar, the holiest of Hindu and Buddhist sites, they struggle to reconcile their rationalist views with faith and the beloved myths of their upbringing. Remarkably, it is this journey that helps them discover the meaning of friendship.

Walking in Clouds is a beautifully crafted memoir of a journey to far-away places and a journey to the places within.

Beauty of Himalayas and Mountains – The Divine in Nature

As if by unspoken agreement, the three of us each find a rock and sit in silence. I close my eyes and listen to the fierce roar of the wind. At my feet, the stream murmurs as it runs over mossy rocks. While I remain as still as the rock beneath me, I feel like a little child, barely able to restrain myself from jumping up and running around in elation. I feel a deep connection with the other two women, though we are sitting apart, immersed in our own ways of silence.

Amidst the cold wind and the moving clouds, a hush pervades the moment. I am filled with the silence in all things: the mountain, the flowing water, the iridescent snow, the cold pure air, the blue sky. There is a hymn for the god Rudra, an ancient form of Shiva, that celebrates the presence of the god in the world and in nature. Snippets of the hymn remind me of the peace of the moment.

Unnamed poets composed these verses hundreds of years ago. They lived, immersed in nature. As they tilled the land or hunted for food or lay looking at the sky, they must have felt moments of stillness. Feeling the immensity of the world around them and the minuteness of their existence, they must have sensed the futility and pathos of this world of striving. Faced with the terrible, mysterious beauty of their world, would they have felt helpless or joyful? Peaceful or afraid? From these verses, it seems to me that they felt all these things, that they sensed the divine in nature.

About the Author: Kavitha Yaga Buggana lives in Hyderabad, India with her husband. They have two children and a very excitable golden retriever.

Her essays and short fiction have been published in The Hindu, River Teeth Journal, Tehelka, Out of Print Magazine, JaggeryLit, and Muse India Magazine. Her travel memoir, Walking in Clouds was released in December 2018 by HarperCollins, India.

In previous avatars, she was a software engineer in Chicago and a developmental economist doing field work in Angallu village, South India.