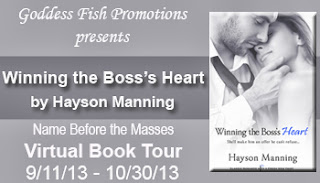 This post is part of a virtual book tour organized by Goddess Fish Promotions. Hayson will be awarding a $50 Amazon GC to a randomly drawn commenter during the tour. Click on the tour banner to see the other stops on the tour.

Well, since I’m as exciting as acne on date night, I apologize upfront if you fall asleep by the end of this post.

1. I can make my eyes shake on demand.
How’s that for a party trick! Some people can make that weird shape with their tongue. Some can do that double-joined finger, elbow thing, which I’m secretly jealous of. I can shake my eyes until people run screaming. My brother and I used to sit there and have eye-shaking competitions until we couldn’t see. Ah, youth and stupidity, all rolled up into a Manning burrito with extra sauce.

2. I didn’t go to college.
Actually, I barely graduated high school. My family is chock filled with scientists and engineers. Me and physics? Never going to happen. At high-school I’d get “Oh, you’re hoody-flungs’s sister.” Eventually the light would die in their eyes when they realized that the apple had not fallen close to the tree, instead a slightly-off orange lay at their feet. I’ve always loved reading and would get lost in words. I’d hide under my covers and read until 3 a.m. much to my mother’s horror. As a writer, I take forty minutes to read every day. Unless Thing One and Thing Two have a bone sticking out, the house is on fire or a strange man is asking them to look for his puppy, don’t disturb me. I used to be ashamed of the fact I hadn’t gone to college. I travelled, lived in London, crawled into the pyramids in Egypt. I like to think I graduated from the School of Life.

3. I love Deadliest Catch and Antiques Roadshow in equal measure.
Talk smack about my crab-fishing dudes and I will take you down. I can’t tell you why I love them, but I do. I’ve never eaten a crab in my life! Is it the drama? The will they/won’t they make their quota? Is it total alpha-males locked together on a boat? Don’t know. I haven’t missed an episode and sobbed openly when Captain Phil died. Speaking of sobbing, nothing pulls at the heartstrings than someone bringing into Antiques Roadshow the painting Great Aunt Ethel left them, that’s been propping up the cellar door for the last ten years, to find it’s a lost masterpiece and is worth a fortune. The people who pick up a sketch at a garage sale for thirty-five cents to find it’s worth ten thousand dollars. Every time I commit to foraging around in boxes on someone’s front lawn but I can never bring myself to do it.

4. I haven’t eaten anything with legs for a really long time.
Okay, since Moses was roaming the earth is about the right timeframe. I like cows and sheep and I know it’s irrational but it’s my thing. This completely stumps Thing Two who insists that I should eat eels, snakes and snails. That’s about as likely to happen as him cleaning his room, loving greens and giving up his addiction to SpongeBob.

5. I’ve read and own every single Agatha Christie novel.
Love them. I got hooked in my teens and would read them through. SI generally never guessed who the baddie was. I think my favorite would be The Murder of Roger Ackroyd. They are all so good.

Are you asleep yet? If anyone’s awake, is there something no one knows about them?

Hayson grew up in a family made up of scientists and engineers and she was told lovingly but firmly that her ‘day dreaming’ phase would end and soon she’d be entranced by the inner workings of the periodic table. But she loved the lands she created. Oh, the creatures that stopped by. The swashbuckling pirates, sassy unicorns and before she knew it she’d be off on a flying carpet with Frank a friendly chain smoking shark.

It soon became apparent she wasn’t going to be awarded the Nobel Prize for services to science.

She has been a personal assistant, a demon word processor. She’s worked in supermarket deli where she can slice a pound of ham in record time. She’s sorted freight and she’s dreamed of writing gutsy independent heroines who won’t give up on their dreams and who’ll go toe-to-toe with their man. Her dream has now come true thanks to Entangled Publishing.

She lives with her infuriating but adored shoe-dropping husband, two teenage boys plus a tubby opinionated cat. There’s often a resident foster dog who needs love, dog biscuits and hanging with the kids on the couch before finding their forever after home.

Mason Christian has twelve weeks to flip something old into something new, and then he's getting the hell out of Footsteps Bay - a tiny New Zealand coastal town. Not even his temporary secretary and personal assistant--the feisty, luscious Billie McLeod--will deter him. But there's no denying she makes him feel alive. More alive than he's felt in three years...