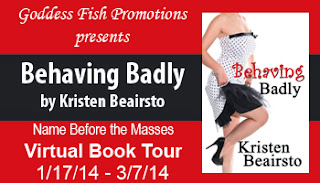 This post is part of a virtual book tour organized by Goddess Fish Promotions. Kristen will be awarding an eCopy of Behaving Badly to five randomly drawn commenters during the tour, and a Grand Prize of the complete set of all 5 of Kristen's ebooks to one randomly drawn commenter during the tour. Click on the tour banner to see the other stops on the tour.

I love contemporary romances because there's so much possibility with everyday situations. I write in the genre because I love trying to make something special and magical out of the ordinary.

Most of the research I have to do involves state laws or police procedures. Or if there's special information that my characters need to know. In one of my previous books, Going After the Heart, I had to research about bears because my heroine and her daughter are cornered by a bear in the back woods of Oregon. Being a city girl from San Diego, I had to figure out everything I needed to know to make it work for the story.

It wasn't something I learned new, but more reminded of: there's always someone there willing to help. In Behaving Badly, Delaney gets caught up in the mindset that she's solely responsible for the survival of the family business and her family's livelihood. The reality was she wasn't alone in that responsibility, her sister was there to help and shoulder some of it too.

I don't think they're weird, but I'm sure others do. LOL! One of the things I'll do if I'm having trouble with a scene is read it out loud and use different voices for the characters. :-)

For the longest time I was a pantser, but over the last year I've become a plotter. I have no idea why it's taken me so long to become a plotter, I try to plan nearly everything else in my life. LOL! But I've found that I write so much faster when I have everything plotted out.

As I'm answering this, one of my five brother-in-laws. Yes, I said five. Hubby comes from a big blended family. LOL! He's on his computer looking at equipment for the family excavation business. :-)

As far as writing goes, I'm just working on promoting Behaving Badly along with my new non-fiction, Treat It Like A Business: An Author's Guide to Setting-Up the Business Side of Writing. Personally, my family is prepping for moving to another state during the spring. Very exciting! But this big change is going to prevent me from coming out with anything new until after the summer.

Delaney Pierce is desperate, no, determined, to rebuild the family business, Manners Matter, after the disaster her own mother brought down on it, and her, a year ago. With two crazy aunts living life moving from one misadventure to the next and her younger sister waitressing to help make ends meet, she pins her hopes on her commission to curb the undesirable habits of Cyrus Chapman, one of New York's premier businessmen and one of the city's most eligible bachelors.

Her resolve to succeed with Cyrus is immediately put to the test during her very first meeting with him and she realizes that no matter how much she prepared for all that was Cyrus, it all paled in comparison to the real man. Things only get worse when he starts hinting at wanting more than a professional relationship.

But Delaney can’t entertain the idea of having more than a professional relationship with Cyrus. After all, that’s something her mother would do and she’s not about to start emulating that woman now. However, fighting her attraction to Cyrus becomes harder and harder the more she’s around him and she finds herself wondering if she’s become so wrapped up in trying not to be her mother that she’s forgotten to just to be herself.

As he stepped up to the door, he wondered briefly what a life coach would look like.

Probably a tall skinny guy that weighed about a buck fifty soaking wet with slicked back hair, who thought he knew everything. He hated know-it-alls.

Shoving open his office door, ready for a fight, he spotted the focus of his irritation staring out the window behind his desk, her back to him.

Clearly hearing him enter, she turned to face him.

Pushing the door closed behind him, he took his time looking her over.
,br> Despite the neat black skirt falling modestly below her knees and the trim blazer that didn’t give away a hint of any of the skin beneath it, failed to hide an obviously curvy figure. A definite change from the usual stick figure models he normally associated with, but he had to admit, he’d always liked navigating curves.

He noted she held her hands clasped in front of her, creamy skinned hands that matched the creamy skin of her oval shaped face that wore a carefully blank expression. She watched him from a pale aqua gaze that concealed any thoughts that might be going through her mind.

At least he’d been correct about the slicked back hair. What appeared to be deep fiery strands were smoothed back severely into a bun at the base of her skull.

He wondered what she’d look like with her hair down around her shoulders.

Mentally kicking himself for letting his mind go there, he shoved his hands into his pockets. She firmly belonged on his Do-Not-Touch list at the moment. Besides, he didn’t need a prissy life coach in his bed. She’d probably try to lecture him on what to do.

“Hello, I’m Delaney Pierce.” Her smooth timbre held only the slightest of hints of a city accent.

About the Author: In between her to-be-read pile and trying to bring the characters in her head alive, Kristen spends as much time as she can with family and friends. Much to her husband’s dismay, she enjoys collecting purses, shoes, and jewelry. During those rare times she’s not working at her day job, rushing her daughters somewhere, watching movies with her husband, and trying to meet a deadline, she can usually be found energetically cheering for one of her favorite New York sports teams.

As with just about every other writer on the planet, Kristen grew up an avid reader. She started with young adult before she technically hit the age range and moved on to sci-fi classics by Isaac Asimov and Ray Bradbury. At fifteen, her best friend gave her a book she just had to read! The book was Honest Illusions by Nora Roberts. Always a sucker for a happy ending, she was a goner and fell in love with the romance genre. Having started writing novel length stories at the age of eleven, Kristen’s stories all took a romantic turn from that point on.

Buy the book on Amazon, Barnes and Noble, Smashwords, or Kobo.
Posted by MJ Thomas at 4:00 AM