Worth Keeping by Susan Mac Nicol - Spotlight and Giveaway 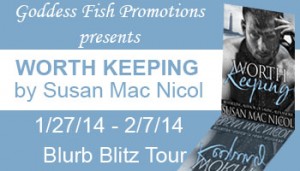 This post is part of a virtual book tour organized by Goddess Fish Promotions. Susan will be awarding one randomly drawn commenter a digital copy of SAVING ALEXANDER and STRIPPED BARE. Click on the tour banner to see the other stops on the tour for more chances to enter.

Nick Mathers pulls Owen Butler from the freezing waters off the Norfolk coast, but Owen’s love can carry Nick back from the edge of oblivion.

Nick cursed the daylight and the truths it brought with it. He finally moved to get up, deciding a morning woody was worth the embarrassment as opposed to this thorough inspection of his body.

Owen grasped his shoulder, holding him back. Nick stilled at the expression on Owen’s face, a mixture of compassion and something else—sheer tenderness. He lost his breath at that look. Nick was torn between badly wanting this man to touch him and fleeing.

He stayed. Owen’s long, warm fingers started to explore his past. Owen’s fingers moved lightly over Nick’s chest, touching the scars, finding the long, jagged one underneath his right arm that trailed down to his ribs.

Nick’s own morning hard-on got steelier by the minute at the other man’s gentle touch. Owen drew a deep, shuddering breath. “Jesus, Nick, someone really did a number on you.” His voice was uncertain. “Unless you did that to yourself?”

Nick laughed shortly. “No, I can’t take the credit for these ones. Not my work.”

Owen shook his head in incredulity. “Who the fuck could do this to someone? Nick, what the hell happened to you?”

Nick shook his head. “I don’t want to talk about it,” he whispered. He shivered as Owen’s fingertips slowly circled the burns. Then Owen did something totally unexpected. He leaned forward and kissed one of them. It was a soft, fleeting caress by a pair of warm lips that felt incredibly good against Nick’s skin. Nick pulled back defensively, sitting up, but Owen’s hand moved gently, pushing him back. The duvet fell to Nick’s hips and he closed his eyes in mortification at the tenting of it around his groin.

About the Author:Susan Mac Nicol was born in Leeds, Yorkshire, in the United Kingdom. At the age of eight, her family moved to Johannesburg, South Africa where she stayed for nearly thirty years before arriving back in the UK in December 2000. She has written nine novels, two novellas and a screenplay since February 2012 and clearly believes in keeping herself busy. She has found herself wanting to stay in the genre that is M/M Romance so more can definitely be expected.

Sue is a member of Romance Writers of America and Romantic Novelists Association in the UK. She is also a member of a rather unique writing group, called the Talliston Writer’s Circle, which in itself has a story all of its own to tell and lives in the rural village of Bocking, in Essex, with her family. Her plan is to keep writing as long as her muse sits upon her shoulder. Her dream is to one day make enough money to give up the day job and get that big old house in the English countryside overlooking a river, where she can write all day and continue to indulge her passion for telling stories.