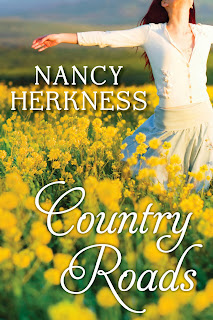 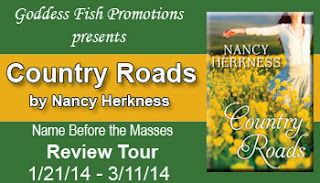 This review is done in conjunction with a virtual book tour organized by Goddess Fish Promotions. Nancy will be awarding a $25 Amazon GC to two randomly drawn commenters during the tour. You can see the other stops on the tour by clicking the tour banner.

When sheltered artist Julia Castillo flees her hometown, she has one goal: to prove to her overbearing family she can make it on her own. She knows they only want the best for her, but when they question her artistic vision, it’s time to break free. Julia’s search for independence carries her to the small town of Sanctuary, West Virginia. There, her courage is tested as never before—by her love for a handsome country lawyer, her bond with a dangerous black stallion, and a secret she is desperate to keep…

Paul Taggart abandoned his high-powered legal career to return to Sanctuary, giving up his own dreams to care for his troubled brother. Then Julia Castillo blows into town like a fresh mountain breeze, changing his staid, predictable life forever. Has Paul earned his second chance at happiness? Or does loving Julia mean having the strength to let her go?

An entertaining read which addresses some issues not always seen in romance novels like epilepsy and alcoholism and recovery.

I enjoyed reading about a heroine determined to break out of her familial chains and become her own woman. Julia is nervous, uncertain and has amazingly poor self-esteem considering how famous an artist she is. She alternately takes huge leaps forward (like leaving home with nothing but a little cash and her paintings and not even taking a cell phone with her), then back again. Sometimes she frustrated me, but regardless she was ultimately an admirable heroine who sought to see the best in people.

Paul was a nice guy, but a bit forceful and controlling. I was a little surprised at how easily Julia let him start dictating her life, even from their first lunch together where he ordered for her. Perhaps that is an understandable conditioned response for her, since she'd spent her entire life that way, but it still surprised me. Thankfully, Paul comes to understand Julia's background and makes some attempts to throttle back on those urges. He's a good, decent guy so she could certainly do worse for a love interest.

The whisper horse plot line was an interesting thing to read about. However, I did find it a little difficult to believe that a mistreated stallion who wanted to attack and destroy anyone and anything it saw was instantly gentle with her. Granted, the entire book only takes place over a couple of weeks, so things have to move quickly, and the idea behind the whisper horse sort of means he'd behave that way, but I've had horses almost my entire life and have never seen that kind of thing happen instantaneously.

Don't let that make you think I didn't enjoy the book. All my complaints were small things. The big things all worked for me: the romance itself and Julia's fight for independence. I really enjoyed the read and am so glad I chose to pick this up for review. It's my first foray into writing by this author and it definitely won't be the last. 4 Flowers.

Another vehicle whooshed past, then flashed red brake lights and pulled over to the side of the highway well in front of her. Now that she had a potential rescuer, all the warnings about what happened to unprotected women with broken-down cars flashed through her brain. As the black, low-slung car reversed toward her, she wished she hadn’t tossed the wrench; hefting it would have made her look a little threatening. Instead she had to settle for arranging her keys between her fingers so their ends stuck out as she made a fist, another tidbit she’d picked up from television.

The car’s door swung open, and a man in a pale-blue shirt, red tie, and navy slacks emerged, unfolding his long legs as he stepped out onto the gravel.

“A tie seems pretty upstanding,” she muttered, loosening her grip on the keys. “Serial killers probably don’t wear ties on a regular basis.”

She planted her feet wide apart and crossed her arms as the Good Samaritan approached with a fluid, ground-eating stride. She guessed he was in his early thirties, and her artist’s sensibility quivered with the urge to paint the planes and shadows of a face that was too strong for classic handsomeness but far more interesting. He had hair like an ancient Greek portrait: thick, dark waves you wanted to bury your fingers in. As he approached, his silver-gray eyes almost glowed in contrast against his olive skin. He would be a perfect model for one of those half-immortal, half-human offspring the Greek gods were always fathering. What were they called? Demigods.

Born and raised in the mountains of West Virginia, Nancy Herkness’s passion for writing romance began the day her grandmother gave her a Georgette Heyer novel. After graduating from Princeton University with honors in English literature and creative writing, she had successful careers in retail, computer programming, and marketing before finally returning to her first love: writing. The author of Take Me Home and three other contemporary romances, Herkness was named one of 2003’s Best Up and Coming Authors in the Affaire de Coeur’s readers’ poll. She is also a winner of the Golden Leaf Award, the Aspen Gold Award, and the Gayle Wilson Award of Excellence. She currently resides in New Jersey with her husband and two mismatched dogs.