Here's to You, Zeb Pike by Johanna Parkhurst -- Interview and Giveaway 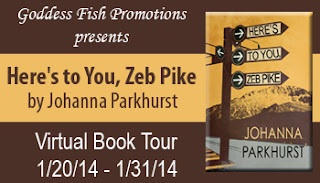 First of all, thanks so much for having me! It’s such a pleasure to be featured on your blog.

I’ve always been drawn to YA. When I was studying creative writing in college, my main characters were always teenagers. Then I started teaching middle school English, so virtually all I ever read was YA lit. It made sense that I’d just keep writing it. I’m incredibly inspired by my students—by the everyday struggles and challenges that they face, and by the incredible wisdom and courage they have when they are handling difficult situations. I love writing about them and with them as my audience.

What research is required for your writing?

Most of my initial research—the idea for the conflict and the characters—usually comes straight out of situations I’m watching my students go through. From there, my research can go in a lot of different directions. For Here’s to You, Zeb Pike, I’ve had my internet browser on sites about Pikes Peak, on blogs about how social services handles foster care situations in different states, and once on a YouTube video about different hockey plays. All of that makes a lot of sense once you’ve read the book, but if you haven’t, my internet browsing history probably looks crazy.

Failure isn’t always what we think it is. Oh, and the difference between a regular and goofy position in skateboarding. I’d say more about the first lesson, but I’d end up giving away a lot of the book. The second lesson came with some help from my students, who are often my best source of research.

I tend to work on a lot of writing projects at once. I just go back and forth between ‘em all. Sometimes this can become a little frustrating, because it can get hard to keep all the characters and plot points straight in my head. At other times it’s really nice, because if one story isn’t cooperating, I just switch over to another one for a bit.

I actually only learned these terms during a recent interview. I am TOTALLY going to teach them to future students, because I kind of love them. I think I’m a little of both. I like to start with the plot in mind, but it usually ends up getting away from me, and the next thing you know I have no idea what the characters are about to do next. Which can be fun, when it’s not driving me crazy.

The giant dog I’m pet-sitting for this week. His name is Boo. He’s been pretty content to sit next to me all week, no matter where in the house I’m doing my writing. At this rate, I’m going to have to include him in some upcoming acknowledgements. He’s shown great unconditional support for me and my laptop.

I have another book coming out from Harmony Ink Press in March. It’s called Every Inferno, and it’s my first attempt at writing a mystery. It’s a little dark. The main character is dealing with a lot of anger and grief, and he’s struggling with alcoholism. He’s also trying to solve the mystery of who killed his parents. Oh, and the guy he’s trying to solve the mystery with might just be more than a friend. It was a really fun, if often difficult, book to write.

I always wonder what convinces people to read a certain book. Is it the cover? The blurb? The genre itself? Some combination? I myself tend to get sucked in by blurbs, but I often wonder if that’s the case for everyone.

About the Author: Johanna Parkhurst grew up on a small dairy farm in northern Vermont before relocating to the rocky mountains of Colorado. She spends her days helping teenagers learn to read and write and her evenings writing things she hopes they’ll like to read. She strives to share stories of young adults who are as determined, passionate, and complex as the ones she shares classrooms with.

Johanna holds degrees from Albertus Magnus College and Teachers College, Columbia University. She loves traveling, hiking, skiing, watching football, and spending time with her incredibly supportive husband. You can contact her at https://www.facebook.com/johannaparkhurstwriteson or find her on Twitter at https://twitter.com/johannawriteson.

Fact: When Zebulon Pike attempted to climb what is now known as Pikes Peak, he got stuck in waist-deep snow and had to turn back.

That’s the last thing Dusty Porter learns in his Colorado history class before appendicitis ruins his life. It isn’t long before social services figures out that Dusty’s parents are more myth than reality, and he and his siblings are shipped off to live in Vermont with an uncle and aunt they’ve never met.

Dusty’s new life is a struggle. His brother and sister don’t seem to need him anymore, and he can’t stand his aunt and uncle. At school, one hockey player develops a personal vendetta against him, while Emmitt, another hockey player, is making it hard for Dusty to keep pretending he’s straight. Problem is, he’s pretty sure Emmitt’s not gay. Then, just when Dusty thinks things can’t get any worse, his mother reappears, looking for a second chance to be a part of his life.

Somehow Zebulon Pike still got the mountain named after him, so Dusty’s determined to persevere—but at what point in life do you keep climbing, and when do you give up and turn back?

Buy the book at Barnes and Noble, Amazon, and Dreamspinner Press. Amazon:
Posted by MJ Thomas at 4:00 AM