Marriage by Arrangement by Anne Greene -- Interview and Giveaway 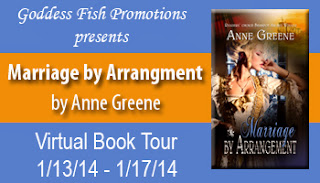 This post is part of a virtual book tour organized by Goddess Fish Promotions. Anne will be awarding a digital copy of Masquerade Marriage – book one in the series, to a randomly drawn commenter at each stop during the tour, and a Grand Prize of a 20.00 GC to the Pelican Book Group website to a randomly drawn commenter during the tour. Click the tour banner to see the other stops on the tour.

A special thanks to Anne Greene for stopping by and being willing to answer a few of our questions. Why do you write in your genre? What draws you to it?

I love history. I can add suspense and mystery and I do add them to each of my historical romances. I can set my stories in any setting. I can sprinkle in real historic figures that might have been forgotten, but who performed heroic or evil deeds. History in romances adds knowledge painlessly to the reader. Also the reader can enter a simpler time with no electronic gadgets to interfere with face to face conversation.

I create an entirely different world from our present day one. I use horses and carriages, huge homes or slave quarters, different fashions than todays from the skin up. It’s a world where people are excited about such modern inventions as gas lights, fabric airplanes, steamships, plows, telegrams, crank-starting automobiles, ice boxes, victrolas, and where women stay at home and raise their family. I show the progression of how women gained independence and self-reliance.

I’ve learned that people are much the same today as they were in the past. They have the same desires, heartaches, failures and successes. I’ve learned that love comes in surprising ways and at inappropriate times and in strange places. Men still strive to protect their women. Women still fall in love with the wrong man. The comedy of life was similar then as it is now. The world was smaller in past eras, and there was less opportunity to change your status in life, but heroic men and women overcame great obstacles to gain their heart’s desire.

My family all think I’m odd to spend hours and hours at the keyboard alone, except for the company of the people inside my head. But those people are real to me, and I love spending time with them. Also, I’m one of those writers who doesn’t enjoy talking about her work in progress. Some writers love talking about their stories to anyone who will listen. I think discussing my story before it’s completed waters down the excitement of creation. I like everything to be fresh when I sit down to write.

I’m a definite pantser. Watching a story unfold like a movie makes the entire process of writing exciting for me. If I plotted out the story I’d be making my characters behave in ways that would not be natural for them. I like to watch them perform and hear what they say. That’s when the story becomes exciting.

My room is stacked with papers. My circular desk is to my right. And my printer. Actually I have two printers, one is for color. Then comes a bank of windows that overlook the golf course. Not that I spend much time gazing out those windows. I don’t. Then comes my corner nook where I keep my art supplies and occasionally I set up my easel and paint a picture. Four tall bookcases are scattered around my room and then comes my desk with my computer. It’s a really nice room. Pictures of my children hang from the walls. My husband and I were professional photographers.

I’m working on a book called Murder In Istanbul. This is a 90,000 Word Romantic Suspense expected to be the first book in a SERIES Titled: CIA Operatives – Other Books in the Series: Murder in Tel Aviv – Murder In Tuscany.

In a single day, an archeologist discovers her brother’s been kidnapped, her purse stolen, and she’s alone in a foreign city with only a mysterious stranger to help. And someone wants the secret she hides…enough to kill her.

Nicole Phillips’ husband died in a mysterious plane crash. She fears falling in love again with the reckless, danger-loving type like her late husband.

Josh Bainbridge, the CIA analyst using her as bait to track the kidnapper, is just such an adventurous man. Besides living on the edge, he’s bitter about women and questions God. The kidnapper murdered Josh’s brother, and he seeks Nicole to use her to force her brother to reveal the secret that leads to fortunes in antiquities. After the kidnapper learns the secret hidden in the map, he will kill both Nicole, her brother, and his old enemy, Josh.

What happens in the roaring twenties when a wing walking flapper falls in love with a daredevil confirmed bachelor?

Wing walker, Gloria Richards, lives in her cousin’s beach house. After her partner dies in a barnstorming crash, Gloria sweet-talks her cousin’s husband’s younger brother, Rand Maitland, a World War I combat pilot turned stunt pilot, into hiring her as his wing walker. Within days Gloria falls for Rand. Being a confirmed bachelor and short of his life goals, Rand keeps Gloria at a distance. He doesn’t want to be tamed by a wife like his older brothers. But Gloria’s all he’s ever dreamed of in a woman—with the added asset of being a never-turn-down-a-dare adventurer. Yet, to find love, both must surrender their dream.


Do you have a question for our readers?

Yes, I have lots of questions, but I’ll only ask a few. What type of story do you like to read best? What do you look for in your favorite books? What makes a particular character real to you? 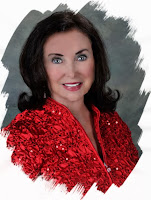 ANNE GREENE delights in writing about wounded heroes and gutsy heroines. Her second novel, a Scottish historical, Masquerade Marriage, won the New England Reader Choice award, the Laurel Wreath Award, and the Heart of Excellence Award. The sequel Marriage By Arrangement released November, 2013. A Texas Christmas Mystery also won awards. She makes her home in McKinney, Texas. Tim LaHaye led her to the Lord when she was twenty-one and Chuck Swindoll is her Pastor. View Anne’s travel pictures and art work at http://www.AnneGreeneAuthor.com. Anne’s highest hope is that her stories transport the reader to an awesome new world and touch hearts to seek a deeper spiritual relationship with the Lord Jesus. Buy Anne’s books at http://www.PelicanBookGroup.com. Or at http://www.Amazon.com. Visit http://www.anneswritingupdates.blogspot.com for information on writing an award-winning novel. Talk with Anne on twitter at @TheAnneGreene. Visit Anne’s Facebook page at https://www.facebook.com/annewgreene?fref=ts.

Why does a handsome, powerful noble of the highest rank in England stoop to marry a mere Lady of Lowland Scotland?

Are the whispered stories about him true? With his shadowy past and strange behavior, what awful secret does he hide? Each change of clothes transforms him into a different man.

Can Lady Cailin keep her vow to make her marriage happy and successful, unlike that of her parents, or must she arrange for the Duke's accidental death?