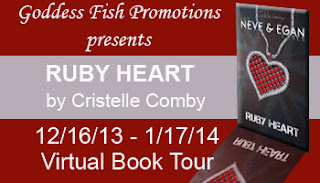 This post is part of a virtual book tour organized by Goddess Fish Promotions. Cristelle will be awarding a signed paperback of Ruby Heart plus a signed copy of book 1, Russian Dolls, to a randomly drawn commenter during the tour. (US ONLY) Click on the tour banner to see the other stops on the tour.

As a child, I loved jigsaws. Then I had this phase, where I wanted to be a magician, and I was obsessed with finding out how tricks works. I guess it’s no wonder I’ve been drawn to mysteries and detectives stories. I love a good mystery: solving the puzzle, finding out who did it and how.

It’s pretty straight forward actually. One of the biggest challenge for me is making my London look like the real London. Luckily, I’ve been there several times… and for the rest, there’s Google Maps ;)

The second challenge is the blindness of one of my main character. It’s a tough thing to write; it keeps me on my toes from the first page to the last.

Patience. You better have the stuff in stock when you’re on a tough case to crack, or when you’re a writer planning her next story.

I have found that I cannot write out of order. I know some people can write one scene here and one scene there, and, at the end, somehow patch it all up together. I just can’t. I have to start from the beginning and always move forward.

I plan everything carefully, spend a long time working on my outline. I find it’s the most efficient way to avoid the blank page monster.

A large window. The blinds are half-open to let the sun in, without it blinding me.

I’m working on the next title in the Neve & Egan series, Danse Macabre. It will be available later this year. I’m actually taking a break from writing the last chapter to do this interview ;). Then there will be the epilogue left, and a few months of editing.

What did you think of the story? What did you like, or not like? I love getting feedback; it’s so helpful. Please write down a review or send me an email, or a tweet to let me know what you thought of it. 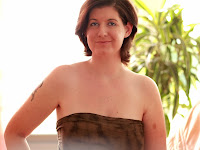 Ruby Heart is her second new-adult novel, and she’s hard at work on the next titles in the Neve & Egan series.

When elderly client Doris Hargrave informs private investigator Alexandra Neve that her beloved antique ruby heart necklace has gone missing for the second time in a period of over sixty years, Alexandra knows this is no ordinary jewellery theft. The ruby heart is a family heirloom and the only thing that connects an ailing Mrs. Hargrave to her parents, who were murdered during the Holocaust.

To solve the case, Alexandra and her business partner, blind history professor Ashford Egan, must sift through obscure Holocaust documents to find out the truth. It’s that way that they learn of a secret World War II-era love affair which could hold the key to all the answers they are looking for. Meanwhile, Egan is under immense pressure from the university to quit his private investigating business, and Alexandra is afraid that a man she trusts will leave her. Again.

When Alexandra begins to receive anonymous threats and her flat is vandalised, this all becomes personal. Knowing that there is someone out there to hurt her, Alexandra vows to find that elusive ruby heart if it’s the last thing she ever does.