The MacBrides: Logan and RJ by J.L. Petersen

This post is part of a virtual book tour organized by Goddess Fish Promotions. J.L. Petersen will be awarding a $10 Amazon/BN GC to a randomly drawn winner via rafflecopter during the tour. Click on the tour banner to see the other stops on the tour.

What was the hardest part of writing this book?

Just like the first book in any series, laying the groundwork that sets up future books takes some thought. I needed to make copious notes to ensure in the future books I remembered the unique details developing about each family member and their role in the family. I also struggled with how I would interweave a possible courtship for Bea, the mother of the MacBride siblings. Hopefully, I can successfully give her a story within her children’s stories.

I am inspired each day knowing no one knows how long we have on this earth. I know that sounds a little dark but when we lost a friend a few years ago and were with him at the time, I saw that you could literally just walk up the stairs and then be gone that fast. So, I found myself asking what the heck I was waiting for to do things I love. What I love, not what I think others think I should be doing. Casting aside my fear of others judging me one way or another.

I am the leading lady in my own life and plan to enjoy it as much as possible. I go to bed each night thankful for another day doing what I enjoy. That is where I draw my inspiration from.

Who are some of your favorite authors that you feel were influential in your work?

From a works perspective:

Julie Garwood, Catherine Coulter, Nora Roberts, Jayne Ann Krentz and Janet Evanovich. Their storytelling is very appealing to me. I like the way they write and inject humor and strength into their characters.

From a “give me courage” perspective:

Newer authors like Kathleen Brooks. Watching them build their libraries and see success in having their stories be well received helped me find the courage to take the risk and put myself out there.

What do your plans for future projects include?

I am currently working on the second of five books in The MacBrides series. It will be Hannah and Ash’s story. Also, I have a desire to go back and give Bette, from Chasing Her Heart, her own story. For fun, I’ve recently taken on a challenge to write a Christmas novella. Hopefully, I can have that ready for this Christmas. The story was a compilation of story concepts a group of my friends gave me one night during a dinner party. I’m trying to incorporate aspects from each person’s thoughts and weave it into a holiday love story. Wish me luck on that one.

Do you ever get writer’s Block? Any tips on how to get through the dreaded writer’s block?

Yes! I used to freak out when it would happen thinking I needed to drop the story or just stop writing. But I’ve found that walking away for a few days and doing something else and having some fun allows me to remember the world didn’t end. And when I’m ready I sit down and just start writing. Eventually it moves from hard to type the next word to actually seeing the scene again.

Logan, the eldest of the MacBride clan, is thrilled at his brother Clay’s pending nuptials to Sandy. But when Sandy’s sister RJ arrives at the family’s ranch, Logan’s world is turned upside down. However, the sisters’ shared past has created scars and barriers against love testing Logan’s ability to push aside his need and patience to win RJ’s trust and ultimately her unwavering love.

Logan studied the woman. He’d bet his favorite horse she thought she was portraying herself as stoic. All he saw was a woman on the verge of breaking. Remorse filled him. He jumped in thinking he knew where the trouble was as he had done with virtually all his siblings since their father died. Now he wasn’t so sure he had approached this situation right. Straightening, he rubbed the back of his neck and tried again.

“Look, I may have jumped the gun a bit. There’s obviously something wrong that has both of you in tears. Can’t I help?”

Frowning at his words, RJ tried to determine if the man was playing her. She’d been burned before by family trying to manipulate her with caring to get what they wanted. Studying him, she captured his image as she would one of her pictures. Studying it for all the nuances not readily seen. Tall, lean with a broad chest, he stood with an ease many would envy. His hair was mostly covered by his cowboy hat, but black locks escaped at the back of his neck. His face was all angles with sharp cheekbones, strong forehead and a nose that looked like it had been broken along the way. His lips were firm and his eyes deep blue.

The eyes held her. There seemed to be sincerity in them but something else was pulling at her. When her mind grasped what that was, she sucked in her breath. Want. And, as if he realized she saw his wanting her, his eyes narrowed and became more intense. She pulled her gaze away quickly, and once again, turned towards the balcony doors. Gathering herself from the shock of his wanting her, she realized her body was tingling. Not good.

“I appreciate the offer, but it’s not something I want to discuss with a stranger.”

Logan was stunned to know she saw his desire for her. It only seemed to heighten his need to grab her and hold tight. When she spoke, he knew he needed a bit of space to process what was happening to him. “I can appreciate that. But don’t be hasty about leaving. Why don’t you join us at the ranch for dinner tonight? If you come about four, you and Sandy can have some private time to talk.” 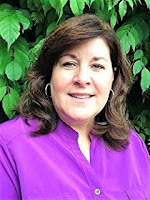 J. L. Petersen lives in Denver with her husband. She finds inspiration in her adopted state of Colorado. She's enjoyed reading all types of romance for years and finally found the courage to start telling her own stories. Ms. Petersen believes love is the strongest, most powerful of emotions. It allows us to trust, believe, forgive and have hope. Her stories try to bring those emotions to her characters.