This post is part of a virtual book tour organized by Goddess Fish Promotions. Archer Miller will be awarding a $25 Amazon/BN GC to a randomly drawn winner via rafflecopter during the tour. Click on the tour banner to see the other stops on the tour.

I find that science fiction is particularly intriguing due to its speculative nature.

The depth of the minds that set the bar for us over so many years. Vern, Wells, Burrows, Heinlein, McCaffrey, Asimov, Pol. If you can't find inspiration there then it's doubtful anything ever will.

Look up and study everything, geology, astrophysics, faster than light travel, string theory, foreign languages and cultures and customs, evolutionary theory, biology, alternative child bearing. If you can consider it, study it. Everything becomes the mortar from which your story is built.

That's easy. Family is not determined by blood but rather by common experience and love.

I believe in listening to the voices in my head. Ask any good fiction writer and they should say the same thing. Characters become so real and vivid they will speak to you in their own voice. Writing is one of the few avocations where borderline insanity is an advantage.

A bit of both actually. I set a rough outline in my head and turn my characters lose in it.

My side table and phone.

There are at least two more books in this series and two more in another totally different line.

What do you look for in a book that grabs and holds your attention?

Humanity has spread to the far reaches of space with The Golden Door, a planetary colonization monopoly, selling off every desirable and not so desirable planet to desperate settlers.

Each new world comes with new challenges, and to meet that challenge the children are evolving.

When Pieter, and other gifted children like him, become the target of government research they must fight not only for their lives but the future of their kind.

Mary’s telepathic shout jolted him out of a sound sleep. As his eyes opened flashes of blue light filled his room. He turned his head to check the common area between the cells. Arcs of lightening sizzled through the room. Kakogo cherta, he thought, watching the dancing discharge.

It’s Mike. He’s having a nightmare. Mary sounded frantic inside his mind.

Can’t you switch him off?

He can’t hear me.

Pieter stood and approached the barrier between his cell and the common room. The crackling discharge reminded him of a small Tesla coil his teacher brought to class. The lightning followed any hand or finger that touched the glass sphere. But this was on a scale he had never seen.

His eyes focused on the room across from his and caught sight of Joan watching the lights. They were all watching, too terrified to do anything to stop it.

Pieter pressed his hand to the clear wall and immediately the blue, static lights flowed to the spot. He felt no pain. The electrical discharge stopped at the other side of the wall, just like the Tesla coil in school. The pops and crackles from the common room made him wary. As he listened he could hear the electric lock mechanism on his door cycle on and off every few seconds.

Has he ever done this before? He asked.

Pieter listened for his door to open and pushed his hand against the clear panel. 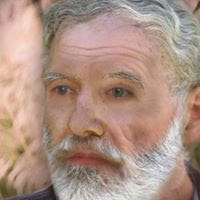 Archer Miller emerged from the East Texas hill country and set his sights on finding the life of which few of his contemporaries dreamed. In 1974, he migrated to Boulder, Colorado to enroll at the Naropa Institute – now known as the Naropa University, a tiny Liberal Arts college founded by the renowned Tibetan Buddhist scholar and lineage holder, the Ven. Chogyam Trungpa Rinpoche (1940-1987). Rinpoche was enormously influential in spreading the teachings of Tibetan Buddhism to the West.

Archer earned a degree in herbs and creative writing. He was a four-year Letterman on the Varsity Competitive Meditation Team.

After graduating in 1978, he took a year off to hike the Jack Kerouac literary trail. He became a top freelance gun-for-hire with dozens of ad agencies across the south and southwest. As a way to deal with the proliferation of Disco, he took up Zen Archery.