This post is part of a virtual book tour organized by Goddess Fish Promotions. Jack Hillman will be awarding a $15 Amazon or Barnes and Noble GC to a randomly drawn winner via rafflecopter during the tour. Click on the tour banner to see the other stops on the tour.

Welcome to It's Raining Books, Jack. Why do you write in your genre? What draws you to it?

I’ve been reading science fiction and fantasy for over fifty years. I like a good story and especially one that has a solid basis in reality (which might sound strange with fantasy). I like stories that make sense even if the sense they make is something I haven’t thought of yet. And when I write, I write the same way.

Quite a bit. You need to do whatever world building is required to give you a proper background for the story. If it’s SF- you need to make sure your science makes sense in terms of the story. You can make up new science, but it has to confirm to the world you’ve built to make the story flow.

Sometimes it’s not how big the weapon is, it’s putting the projectile in the right place at the right time. (Ian Goodfellow)

I write in silence so my thoughts aren’t overwhelmed by the reality around me.

A bit of both. I tend to start as a plotter, shift to pantser about halfway through and finish as a plotter as I bring all the threads together.

This novel is first of a series so I’ll be working on the next book in that list- Magic Forbidden. And I have several other projects, both science fiction and fantasy, that I can shift to if I need to stop and think for a while. Like most writers I tend to think about more than one project at a time.

Yes, what kind of story would you like to see that nobody has written as yet. If I like the idea and it’s within my skill set I might give it a shot. 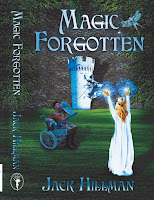 Magic Forgotten is an Adult Urban Fantasy set in Eastern PA. It is the story of a paraplegic, freelance writer who has withdrawn from the world only to be dragged back out by the appearance of two strangers in his back yard. They are a Sidhe, the old elves of England, and a human wizardess, a captive of the elf, and they are here to take over the world. The writer and the wizardess have to stop the elf from achieving his plans.

Dan gripped the rails of his chair with both hands, holding himself upright by what little strength remained in his body. The cold touch of the steel tubing seemed to give him energy and he looked up at Baraz.

“What is it you need?” he asked, weakly. The stones permitted this question, perhaps because it was a benefit to Dan’s master. “I can find anything here faster than any visitor. You need me alert and conscious. To get what you need.” Each phrase was a strain to speak, without direction from Baraz.

“We have found what we need, cripple,” Baraz answered. “By now, Thook has discovered the way into the place where they grow the gems we seek.” He stood, pointing to the computer as if the gems were there for display. “That place grows gemstones, an amazing skill I must learn for myself. Two stones of the proper design, placed together inside a spell Thook will prepare, will open a doorway from my world to thine. The light of the sun will rip through the veil and provide the path for my queen to come back to her power.”

“You want laser crystals,” Dan exclaimed, the logo now making sense to him. He had seen it before, in an ad in the employment section of the local paper. SolarTech grew laser crystals for industrial use and they were looking for good employees to work in the labs and clean rooms of their facility. “This has got to be the strangest quest I ever heard of,” he mumbled. “You look like a reject from a sword and sorcery movie. Playing with laser crystals, no less.”

“Enough,” Baraz shouted. “Thy place is to obey, nothing more.” He stepped forward and pointed the ax at Dan. “I could dispense with thee now, but that would require another tool in thy place. But soon, fool, thou wilt be as worthless as thou appear. Then I will deal with thy insolence.”

Dan snapped. Baraz was within arm’s reach. Uncaring of the pain caused by the stones on his wrists and forehead, Dan gripped the shaft of the ax. More due to Baraz’s surprise than any martial skill, Dan jerked the ax free, spun it in his hands and swung at Baraz’s stomach. The blade sheared through the tunic, grating on the mail beneath. Dan spun the shaft in his hands, tangling the tunic around the ax-heads and pulled, dragging Baraz to him.

About the Author: A lifelong Pennsylvania resident, Jack began a love of books sitting amid the mystery of hospitals and medical paraphernalia. Mythology of all cultures and a fascination with martial philosophies led to King Arthur, the knights of the round table and an array of science fiction and fantasy authors that had a strong impact on his life.

Real life got in the way of a writing career to start, but thirty years in the life and medical insurance field led Jack to a job as a stringer for local newspapers and writing for medical and insurance journals. In addition to years in the insurance field Jack also has fifteen years experience as a journalist and freelance writer, and has even won a Keystone Press Award (1998) for his journalistic efforts. Jack has written on a wide variety of subjects and keeps his hand in medical and insurance matters on a daily basis.

In addition to newspaper reporting and magazine articles, Jack has written articles for a variety websites--some under his own name and some as a behind-the-scenes contributor. Jack's first short fiction piece, a novella, was serialized in an old BBS site in 1992, with the first hard copy magazine story arriving in 1993. Four dinner theater plays written by Jack have been produced and performed for local theater in Eastern Pennsylvania. His novels are now coming to light with the release of There Are Giants In This Valley published by Archebooks Publishing.

With experience as a journalist, short story writer, playwright and novelist, Jack often speaks at writer's conferences, to writer's groups and to school gatherings. If you are looking for a speaker on esoteric subjects, Jack probably has something tucked away in a folder for the occasion.

He lives in eastern Pennsylvania with his supportive wife, a squad of feline editors, and an array of edged weapons to inspire his works.