I Am More Than My Hair by Alyscia Cunningham

This post is part of a virtual book tour organized by Goddess Fish Promotions. Alyscia Cunningham will be awarding a limited edition 2019 calendar for "I Am More Than My Hair" (US only) to a randomly drawn winner via rafflecopter during the tour. Click on the tour banner to see the other stops on the tour.

How did this project begin?

I cut my hair in support of a Big Chop for a non-profit organization and was shocked at the negative responses. In turn I created a project that would capture portraits of women who've experienced hair loss accompanied by their essays about their personal experiences. Then "I Am More Than My Hair" was born.

What do you hope you'll achieve with this project?

There is not a single standard of beauty regardless of our hair, race, size or condition. My goal is to show society that despite the pressure placed on women about hair, without it, we're still beautiful.

Do you think that the book will make people uncomfortable?

Unfortunately, it will and has done so already. The discomfort stems from the fact that the topic of female hair loss is still somewhat taboo. Once we can see a female news reporter, an actress, celebrity or even a teacher who is not only bald but unapologetically bald, then the level of discomfort may decrease. Until then, I will do my part to continue creating platforms to discuss issues that hold dear to us as women. Female hair loss is one of the issues.

Do you *want* to make people uncomfortable?

How did you recruit the women whose portraits are in the book?

I contacted quite a few organizations, related to women's health and alopecia. I shared details about my project and my call for participants. The orgs posted my call on their social media pages and everyone reached out to me to participate.

Please tell us a bit about the film that is the other component of this project.

I Am More Than My Hair, is a two-part project, documentary film and photography book. The soon to be released documentary film features interviews of females, their experience with alopecia and the connection of their emotions to the media's standards of beauty. 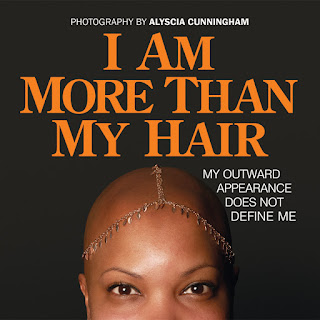 From the time we are young, girls are pressured into a set belief of beauty standards. Hair is certainly high on the list and is often labeled as our "crown and glory." Where does this notion fit for a girl with alopecia (the partial or complete absence of hair from areas of the body where it normally grows; baldness)? This new coffee table book should bring light to the issue.

I Am More Than My Hair: My Outward Appearance Does Not Define Me, is a two-part project, documentary film and coffee table book. The newly published book features 138 portraits of 46 women and the stories of their experience with hair loss, as well as women who cut their hair in solidarity of a loved one.

On May 24, 2011, I discovered a large mass in my left breast while I was doing my self-check. Later that day, I went to the National Cancer Prevention Institute in Lagos for a breast screening. A nurse screened both my breasts and my cervix and referred me for sonography, which was done at a local scanning center. On June 3, 2011, I had a Fine Needle Aspiration Cytology procedure at Me Cure Health Care Limited to diagnose my condition. I was told that the breast lump was benign and that the left auxiliary lymph node was negative for malignant cells. On June 11, 2011, I had my first lumpectomy at a local medical center.

Barely four months later, I discovered another lump slightly above the previous operation site and had surgery at the same hospital. But this time, I insisted on further medical investigation to know why the cancer recurred. That’s when I was diagnosed with invasive ductal carcinoma. By April 2012, I was diagnosed with Stage IV carcinoma.

I had withheld the news from my dad because he was hospitalized for paralysis, but with the latest diagnosis, I couldn’t hold the news any longer. I told my dad about it on July 31, 2012 hoping he had gained enough strength to handle the news but, unfortunately for me, he passed on to glory the following day, which was my birthday, August 1, 2012.

My friends and family supported me and, before I knew what was happening, all my friends joined a campaign for me on Twitter tagged “walk against cancer, #savedebbie.” I got the exact amount of money I needed for my treatment in the United States ($55,000), but I had to start chemotherapy right away in Nigeria.

I arrived in the United States in October 2012 and started treatment at Howard University Hospital. I had chemotherapy for 10 months followed by a bilateral mastectomy in October 2013. To the glory of God, I survived Stage IV breast cancer, but I am still fighting bone and liver cancer. 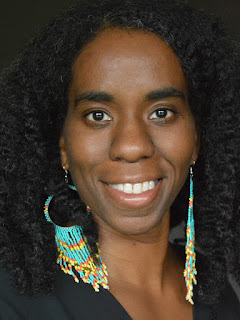 Alyscia Cunningham is an entrepreneur, author, filmmaker and photographer who has contributed to the Smithsonian, National Geographic, Discovery Channel and AOL. In September 2013 Alyscia self-published Feminine Transitions, a photography book encompassed with portraits of raw feminine beauty. Her recently published photography book and upcoming documentary film, I Am More Than My Hair, features 138 portraits of 46 females and the stories of their experience with hair loss as well as females who cut their hair in solidarity of a loved one. Alyscia creates these, and future projects, with the consideration of art for social-change.

Alyscia specializes in promoting our natural beauty because she believes the media does a good job of focusing on our insecurities by bombarding us with ads proclaiming that their appearance without enhancements is inadequate or faulty. Her portraits are unaltered by Photoshop and reveal women as they are naturally, without the façade they put on for others.

Her work has been featured on Fox5 News, The Huffington Post, Cosmopolitan, The Washington Post, APlus, and Proud2BMe. To learn more about Alyscia and her work, visit Alyscia.com.

Alyscia also invites you to view her video introductions to Feminine Transitions, and I Am More Than My Hair.