Freedom of Love by G.S. Carr - Guest Blog and Giveaway 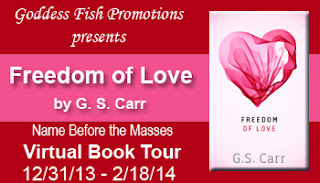 This post is part of a virtual book tour organized by Goddess Fish Promotions. The author will be awarding a $20 Amazon gift card, a swag pack with bookmarks, bracelets, key chains etc. related to Freedom of Love, and two paperback copies of her favorite romance novels, to a randomly drawn commenter. (US ONLY) Click on the tour banner to see the other stops on the tour.


Five Things You Would Probably Not Guess About G.S. Carr

First, I would like to say thank you so much for having me today. I’m looking forward to connecting with the many awesome readers out there. So, five things you would probably never guess about me:

1. I generally march to the beat of my own drummer in most aspects of my life, especially my fashion. One year when I was in high school I received a pair of knee high rainbow socks from an aunt. I had no idea what to do with knee high socks but I didn’t want to make her feel bad for giving me a gift I would never wear. So in the middle of January when I went back to school I cut a pair of jeans into shorts that stopped at the knee and wore those rainbow knee highs out in the freezing cold. People either thought I was crazy or bold. I think it was a mix of both.

2. I once had a Christmas tree that I kept until April. It was the first plant in a long time that I was able to keep alive for so long and I was super excited about it. I even kept the decorations on it because they were so beautiful and it made me feel happy just looking at it.

3. The song that I will walk down the aisle to when I get married will either be Beyonce “Diva” or Rhianna “Rockstar”. I intend to have to aisle look like a runway and I am going to strut down in like I am a supermodel.

4. My youngest brother was born when I was 17 years old. Once, when he was about 2 years old I was tasked with watching him during the day over my summer vacation. Like most teens I stayed up on the phone the night before and attempted to sleep in until noon during the day. I laid on the sofa and would occasionally open an eye to make sure he was still breathing. At one point it got very quiet. I went looking for him and found him covered from head to toe in blue marker. I had to spend the evening explaining to my mother why my brother looked like a Smurf.

5. I have a day job as an accountant. One day (with the help of the amazing readers out there) when I have a few bestselling novels I would like to quit my job and be a vagabond. I want to travel around the world with nothing but my tablet and write and eat. 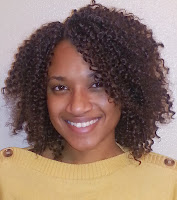 Raised in Charlotte NC, G.S. Carr has always enjoyed indulging in her imagination. At a very young age she had a thirst for reading and the many possibilities it helped come alive in her mind’s eye. She consumed books like they were the air she needed to survive. It seemed inevitable that her love of reading would transcend into a desire to create her own stories. She began writing poetry and stories at the age of 10. By the time she was thirteen she found her passion in the romance genre and has not looked back ever since.

The stunning daughter of the French nobleman Dominique, marquis d’Chartes and the African beauty Imani Marsan, Soleil is captivated by everything during her first trip to America including Alex. She loves him almost from their first meeting. However, their love is interrupted when she is abducted and sold into slavery. Alone and scared she only wishes to regain her freedom.

Alexander couldn't help but love the exotic beauty with the caramel skin that made him want to taste it. Losing her was the hardest day of his life. After years of searching she appears as if conjured by his deepest desires. But she returns far from the same. Can they rekindle their love or will they never find the freedom only love can bring.

Buy the book at Barnes and Noble or Amazon.